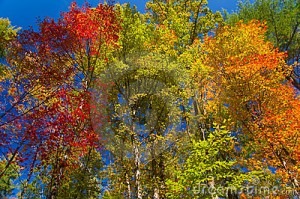 On 14 October 1850, Robert and Clara Schumann played host to Mary Potts and her husband John Perkins in Düsseldorf. The visiting couple had married in New York just months early, and was looking to spend their honeymoon in Europe. You may well be asking how an American couple ended up in the Schumann’s living room? Well, Mary Potts, daughter of a well-known Presbyterian minister and a highly gifted pianist had been studying with the German-American composer Otto Dresel. Dresel originally hailed from Geisenheim am Rhein, and his considerable musical talent caught the attention of Franz Liszt who invited the young pianist to study with him in Weimar. After several months in the Liszt salon, Dresel continued his musical education in Leipzig, studying with Mendelssohn, Moscheles and Schumann. Apparently, Schumann provided Dresel with a glowing letter of recommendation prior to his departure for New York in October 1848. Dresel would eventually end up in Boston, and make his mark as a prized pianist and teacher among Boston’s high society.

Mary Potts was not only a talented pianist but also a gifted composer. She published a “Ballad with piano” under her teacher’s name, and the piece was sent to Schumann for review. “This is the title of a very fine song, which is, however, as we learn, not a composition of Dresel’s, but comes from the pen of a very talented M.P., a young lady, whom nature has gifted with a genuine artistic and musical soul; whose delicate sense, extremely refined taste, and surprising judgment; whose deepest sensibility to everything beautiful and great within our art, can but interest and gratify every true and sensible artist enjoying her acquaintance. Her genius has the best influence on the propagation of dignified, good, and noble music, and neither tolerates the slightest triviality, nor excuses any want of dignity in regard to musical matters. These qualities trace a line of distinction between her and those less gifted amateurs who, from want of talent or good sense, are not able to judge of the spirit of the injurious modern salon music, and the impure sentimentality of a certain kind of Italian music, manufactured on well-known principles, to flatter the ear and to ensure the sympathy of the uncultivated mass—and thus we find in the above song nothing but the purest and simplest style, and a most heartfelt expression.” When Mary Potts and John Perkins—a wealthy Louisiana lawyer and legislator—tied the knot and ventured forth to Europe, it was Otto Dresel who arranged the meeting between Mary Potts-Perkins and his former mentor Robert Schumann. 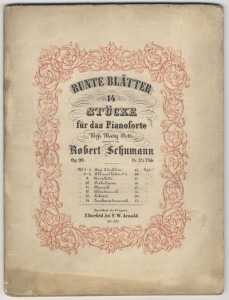 Robert Schumann: Bunte Blätter (Colorful Leaves), Op. 99
The meeting between the Schumann’s and the Potts-Perkins’s seemed to have gone splendidly, because on 16 June 1851, Schumann sent the following letter to Mary. “A few musical leaves bearing your name will perhaps soon fall into your hands. Please regard them as a remembrance of the hours that revealed you to us as the possessor of such a profound musical soul. The more rarely one encounters such souls in the world, the more one wishes to remain in their thoughts. We have also heard of your suffering—with heartfelt sympathy. What you intimated, what we suspected, has unfortunately come to pass. Could we soon hear from you personally how you are faring? My wife sends you her greetings, and begs, as do I, that you remember us fondly.” The musical leaves turned out to be Schumann’s Bunte Blätter (Colorful Leaves), published as his Opus 99 and dedicated to Mary Potts. Curiously, Schumann’s letter makes reference to Mary’s suffering. As it turns out, the suffering had nothing to do with physical ailments, but with the fact that Mr. Perkins abandoned his wife in Paris. From the divorce proceeding we learn that “the petitioner was residing with his wife in the city of Paris. His wife Mary did suddenly, cruelly and without cause or notice abandon their common dwelling, and did absent and conceal herself from your Petitioner for the space of six weeks, causing your Petitioner the most cruel and agonizing suspense regarding her position and safety, and thereby subjecting his name and character to unjust aspersions and inferences. Her treatment of him has been cruel and unjust to such a degree, as to render their living together as man and wife, insupportable, unadvisable and impossible.” Rumor is, that Mary’s sudden six-week concealment was somehow connected to a French dancing master! Robert Schumann was himself not inexperienced in the trials and tribulations of love and marriage, yet he attempted to suppress the dedication to Mary Potts. However, the title page had been engraved already and thus “that American woman” made it into the annals of the history of music.