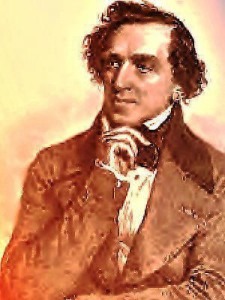 Giacomo Meyerbeer first visited Italy in 1816. He only planned for a brief study tour, but in the event, it gradually extended itself to nine years! During that time, the composer produced seven operas, starting with the semi-serious Romilda e Constanza staged at the Teatro Nuovo in Padua on 19 July 1817, and finishing with Il crociato in Egitto at the Fenice Theatre in Venice on 7 March 1824. An eighth opera, Ines di Castro, destined for Naples was left unfinished. At the end of his Italian tenure, Meyerbeer was rightfully considered one of the most successful opera composers, on par with Gioachino Rossini.

Meyerbeer’s second opera Semiramide was written for one of the most esteemed singers of the day, Carolina Bassi, a performer with great vocal agility and enormous range. First performed at the Teatro Regio in Turin during the 1819 carnival season, the plot mixes palace intrigues, unlikely lovers, and trouser roles. Meyerbeer’s music, featuring an abundance of ornamentation and rhythmic crescendos, clearly attempts to imitate the operatic style of Rossini. On account of several tuneful arias and exciting ensembles the opera was fairly successful, although more favorably reviewed by German critics than Italian.

Classified as a ”melodrama eroico,” Emma di Resburgo was Meyerbeer’s first real success in Italy. Based on a libretto fashioned by Felice Romani, the opera was first given at Teatro San Benedetto in Venice on 26 June 1819. It soon went beyond Italian borders, and received performances in Dresden, Berlin and Vienna. Carl Maria von Weber directed and conducted the opera in Dresden in 1820, but he was not particularly impressed. “There must be something seriously wrong with the digestive powers of Italian stomachs for a genius of such original powers as Meyerbeer to have felt it necessary, not merely to have set nothing but sweet, luxuriantly swollen fruit on the table, but also to have sugared it over in this fashion.”

For Margherita d’Anjou, written for La Scala in Turin, Meyerbeer mixed “buffa” and “seria” characteristics within the same work. Originally, librettist Felice Romani had fashioned the libretto for Francesca da Rimini, but Milanese censors banned the story. Although Romani considered the substitute Margherita d’Anjou as “written in haste and without convictions,” the work was nevertheless well received. Meyerbeer himself called the libretto “one of the most beautiful lyric dramas that has ever been written.”

In the historiography of opera, Meyerber’s years in Italy are considered a time of “operatic apprenticeship.” It is certainly true that his time in Italy was a learning experience, but by the time of Margherita d’Anjou, his artistic maturity had begun to manifest itself and contemporary audiences came to view him as a real competitor to Rossini. Meyerbeer writes, “I did not want to imitate Rossini or write in the Italian manner, even if I ultimately felt compelled by my state of mind to do so.” Notwithstanding that L’Esule di Granata was produced only once following its 1822 première at La Scala, there is incontrovertible evidence that Meyerbeer had developed a distinctive operatic style of his own.

A renowned opera scholar once suggested that “Meyerbeer created his operas not as Delacroix painted a battle or tragic death-scene; rather he made them as a vast, elaborate woven tapestry, showered with detail and colour, the result of years of painstaking work.” This is certainly true for Il crociato in Egitto (The Crusader in Egypt) of 1824, generally considered Meyerbeer’s Italian masterpiece. Different in scale and leading the way towards an entirely new nineteenth-century operatic style, it played in a number of European opera houses. Ultimately, it paved the way for the composer’s Parisian popularity.

Set during the sixth crusade, the plot retells the story of the love between Palmide and Elmireno, embedded amongst the religious tensions between the leading groups of characters. It was the last major work composed for a castrato, specifically for Giovanni Velluti, who sang at the Venice première. Despite the international success of Il crociato in Egitto, Meyerbeer was still greeted with reserve in his native country, and he soon abandoned his plans for adapting his Italian operas for the German stage. About his time in Italy he later wrote, “I was bewitched in a magic garden. It was a period of seduction, in which my own artistic self was unfaithful to me.”