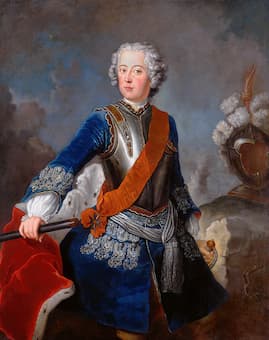 The court of King Frederick II (1712-1786) of Prussia was one of the most musically sparkling of its time. Led by its flute-playing king, the court began with a chamber orchestra with 17 members conducted by Johann Gottlieb Graun and ended up with an orchestra that set the standard in Europe. Frederick took the throne in 1740.

Although his father Fredrich Wilhelm I, had been militaristic, with one writer describing him as having an addiction to ‘everything that concerned the military,’ Frederick II was known to practice his flute 4 times a day. The instrument accompanied him on his military campaigns, along with a travel pianoforte. With the fine arts languishing under his father, Frederick changed the direction of the arts in Prussia upon his ascent to the throne. The court opera was a glittering jewel and his court orchestra was noted not only for its quality but also its size. He also led Prussia in military might – greatly increasing the Prussian territories and making it a major European military power. One of the cities he conquered was Dresden in 1745, and Frederick II took musicians from that court for his. 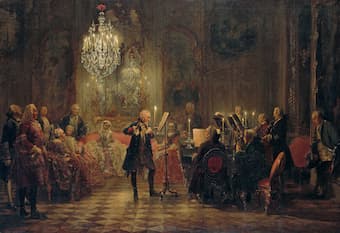 Centered in Berlin, Frederick’s court brought together talented musicians, including his flute teacher, J.J. Quantz, and the brothers Carl and Johann Graun. Carl took over opera composing while Johann brought up the musical standard of the orchestra. Carl Graun was the most important composer of Italian operas in German of his time. One of the most important musicians at the court was the second eldest son of J.S. Bach, C.P.E. Bach, who held the position of first cembalist.

In this painting of Frederick II playing the flute, the artist has included C.P.E. Bach at the keyboard, and the king’s flute teacher, J.J. Quantz, at the far right.

Frederick’s orchestra was handled in a military manner, with uniforms for all players and discipline about the music. He dictated that the music should be in the Italian style. His opera was based on Italian repertoire, and he sent Carl Graun to Italy to engage Italian singers and directed him to compose Italian-style operas. 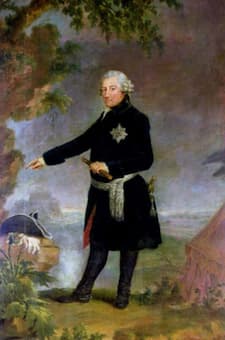 This didn’t last forever. After the end of the Seven Years War (1756-1763), Frederick II stagnated – Graun died in 1759 and opera productions stalled. Some years there were no operas and other years all that were put on were old pre-war productions. His brilliant musicians left, including C.P.E. Bach who went to Hamburg to replace his godfather G.P. Telemann as music director. Bach maintained an honorary title of court composer to Frederick’s sister, Princess Anna Amalia.

As a composer, Frederick II wrote music more the just for private use – his works were performed at court. He wrote 4 flute concertos, 121 flute sonatas (11 of which are lost), 3 symphonies, and three marches. He also wrote secular cantatas but they are now lost, too. He loved operas but never wrote one himself – he did, however, contribute arias for operas by Carl Graun, and wrote the libretto for Graun’s opera Montezuma. His flute sonatas make virtuosic demands on the performer and are excellent at conveying different ranges of emotion, expressing both soulful and spirited feelings.


As a player and performer, Frederick the Great (as he was known, even in his lifetime) was praised by historian Charles Burney: ‘His playing was superior, in many respects, to anything I had heard from amateur or indeed professional flute-players.’


Frederick’s musical court at Berlin and Potsdam brought together a group of outstanding composers and performers that would create a new cultural aesthetic of sensibility, leading to the overly dramatic upcoming era of Sturm und Drang.