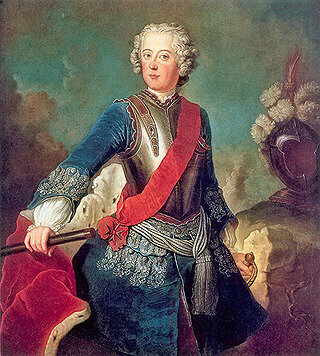 When Carl Philipp Emanuel Bach joined the royal court of Frederick the Great of Prussia as an accompanist in 1740, a stable of some 17 musicians primarily devoted to the performance of chamber music greeted him. The monarch himself was an accomplished flautist, and Charles Burney reports, “His Majesty allotted four hours a day to the study, practice and performance of music. Frederick’s flute even went on campaign with him as an aid to relaxation together with a collapsible harpsichord, which folded into three parts to assist with the traveling.” For Frederick, music provided a welcome release from the pressures of implementing social reforms and waging international warfare, and the king frequently featured as the soloist in his own compositions.

Among the most influential musicians at Frederick’s court was the Bohemian violinist and composer Franz Benda. Appointed in 1732, Benda eventually became the concertmaster to the king. In his autobiography of 1763 he boasted that he had accompanied “our truly great Frederick in flute concertos at least ten thousand times.” Benda became the founding father of a dedicated German school of violin playing, and C.P.E Bach described his efforts “so truly cantabile, that scarce a passage is to be found in his compositions which is not in the power of the human voice to sing; and he is so affecting a player, so truly pathetic in an Adagio, that several able professors have assured me that he has frequently drawn tears from them in performing one.” 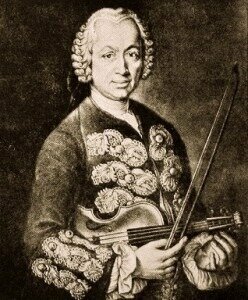 As the royal flute teacher, Johann Joachim Quantz held a unique position in the royal household. His salary of 2000 Thalers a year made him the most highly paid wind player in all of Europe, and his treatise On Playing the Flute, published in 1752 spread his fame far and wide. Quantz wielded considerable influence at court, as attested by C.P.E.’s observation. “Which is the most fearsome animal in the Prussian monarchy? It is Madame Quantz’s lapdog. He is so terrifying that Madame Quantz quails before him; Herr Quantz, in turn, is afraid of Madame Quantz, and the greatest of all monarchs fears Herr Quantz! During his extended career at court, Quantz composed around 300 flute concertos for Frederick’s exclusive use. 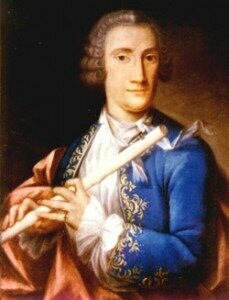 Frustratingly, Frederick never perceived the exceptional talents of Carl Philipp Emanuel. He was the lowest paid among all the musicians, receiving around 300 Thalers a year. Throughout his 30 years of service to the king, his fundamental role as court accompanist in the royal chamber music did not change. Most discouraging was Frederick’s severely conservative musical taste, and it is hardly surprising that C.P.E. constantly sought alternate employment. “His true importance was never understood by the king; and his independence of mind offended a monarch who was accustomed to obedience in artistic matters as in civil and political ones.”

During his Berlin tenure, Carl Philipp Emanuel penned his definitive work on keyboard technique entitled Versuch über die wahre Art das Clavier zu spielen (Essay on the True Art of Playing Keyboard Instrument). The treatise was immediately recognized as a seminal work, and together with the flute treatise by Quantz and the Violinschule by Leopold Mozart, remains the most important source for performing practice and style in the middle of the 18th century. More on C.P.E. Bach’s keyboard mastery in our next episode; please join us then.