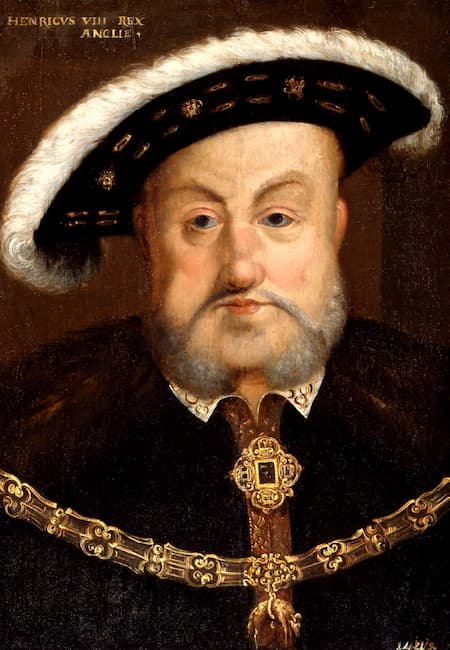 Unknown: Henry VIII, after Hans Holbein the Younger, 17th century,
based on a work from 1542 (National Portrait Gallery)

But, if we look at the younger Henry, we get a glimpse of the man who the Venetian ambassador to the court Piero Paquialgo, described in 1515 as ‘the handsomest potentate I ever set eyes on.’ He was tall and athletic, and in this picture by an unknown artist, is shown taking off a gold ring. His clothes are sumptuous and help to create the image of the powerful and lively young Henry. 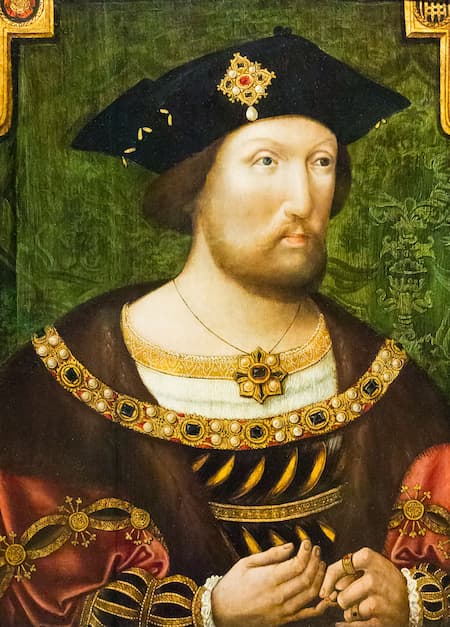 Henry, the second son of King Henry VII, was not intended to be king. As a second son, he probably had a career in the Church ahead of him. However, the death of his older brother Arthur in 1502 and the death of his father mean that in 1509, the 18-year-old Henry took the throne. His education to that point would have been well-rounded, and he was known to have excelled at languages, literature, theology, sport and, famously, music. His musical training is unknown, but at his father’s court were composers such as William Cornysh. When he took the throne, the number of singers at court increased from perhaps a half dozen to nearly 60. He had both his own private chapel choir and the musicians of the Chapel Royal.

As a musician, he was competent at most instruments of the day, be they keyboard, string, or wind instruments. He also delighted in singing. He composed two masses for five voices that were sung in his chapel and in the Henry VIII manuscript, 33 of the 109 songs and pieces were by Henry. The two masses are lost, but in his music, we see him grow from a young composer with music filled with errors: open chords, parallel fifths and the like, into a composer with a good sense of how to handle his material.

Of his instrumental music, the most accomplished work is Tander naken, in which a florid descant is played over a pre-existing popular song from the continent.


Of his vocal music, one of the most popular remains his ‘party’ song, celebrating his friends and the good times they have: Pastime with good company.


In 1515, May Day was celebrated at Greenwich with all kinds of music, including, according to this description, a mix of natural and ‘made’ music:

‘In the wood were bowers filled purposely with singing birds which caroled most sweetly, and in one of these bastions or bowers were some triumphal cars, on which were singers and musicians, who played on organ, lute and flutes for a good while, during a banquet which was served in this place.’

We know that William Cornysh was one of the composers for this festive gathering and he was given £100 to pay for the May Day event. Doesn’t sound like much? That would be over $130,00 in today’s money.

Another love song is Green Grows the Holly, which includes the sentiment: as the holly grows green and never changes, so I am ever true to my lady. Ironic, now that we know of his later adventures in matrimony.


He also wrote ensemble music. His consort music was some of the earliest music in England written for instruments along. Henry supported his household musicians and music like this is evidence of the prevalence of musician who could now read music, rather than just earn by rote.


Beyond his own compositions, as part of his musical heritage, he founded two of England’s greatest musical institutions: the completion of Christ Church, Oxford (1546), and in Cambridge, combining Michaelhouse (founded 1324) and King’s Hall (founded in 1317) into Trinity College in 1546, and the completion of King’s College in Cambridge. Begun in 1441 by his uncle, King Henry VI, the building was supported by the family for the next century. At Henry VIII’s death in 1547, the Chapel was seen as one of Europe’s ‘finest, late medieval buildings.’ 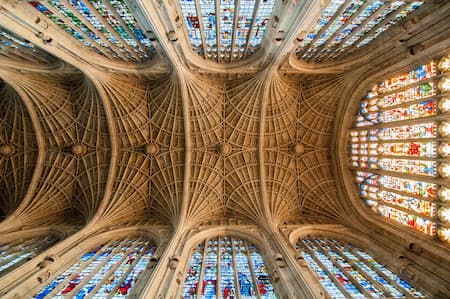