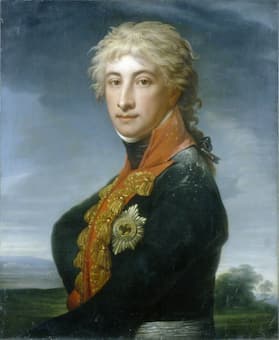 Berlin-born Louis Ferdinand of Prussia (1772-1806) was a nephew of Frederick the Great. He was active in the Prussian military, serving as lieutenant general. He died in battle with French forces at the Battle of Saalfied, during the War of the Fourth Coalition.

Musically, he was a pianist and a composer. His early pieces were performed by the orchestra of his uncle, Prince Henry. In the salons of Berlin, he was frequently found improvising at the piano. One sign of the regard in which his piano playing was held was the dedication by Beethoven of his third piano concerto to him. Beethoven commented that his playing ‘was not the one of a King or Prince but of a skilled pianist.’ 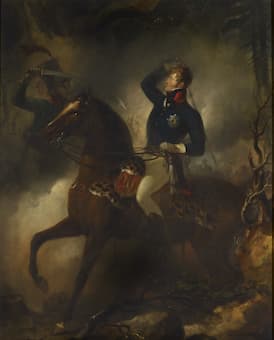 Growing up, the court of Frederick II and that of his aunt, Princess Anna Amelia, provided a music-intense background for him. It is said that he frequently played his keyboard works on the Princess’ piano or organ. We shouldn’t forget that Anna Amelia was also a composer. His performing skills were what he was best known for; it was only later that his compositional prowess was recognized. His compositional output is numbered at 13 pieces, ranging from works for piano and orchestra, piano quintet, piano quartet, piano trio, and piano solo to a nocturne for flute, two horns and piano quartet. Only the Opus 1 Piano Quintet was published in his lifetime. Opp. 2-6 and 10-11 (piano trios, quartets, and a quintet) were published in 1806, op. 7 (a Fugue for piano solo) 1807, Opp. 8-9 and 12 (works for larger ensembles) in 1808, and his last work, the Rondo No. 2 in E flat major for piano and orchestra, appeared in 1823.

His works, such as the Piano Trio in A-Flat major, Op. 2 have a style and lightness that distinguishes him from being just any amateur player.


When he writes works for larger ensembles, such as his Rondo No. 1 for piano and orchestra, op. 9, he’s skillful at bringing out the characteristics of each part of the ensemble.


In writing his Nocturne, he was picking up on ‘party’ genres of his day – music written for evening parties. This isn’t the same as the new nocturnes created by John Field and popularized by Chopin.


This painting of the death of Louis Ferdinand in battle was probably commissioned by King George IV of England. The painter, Peter Edward Stroehling, was styled as ‘Historical Painter to the Prince of Wales’ between 1810 and 1820. He was killed in combat by Jean-Baptiste Guindey, quartermaster of the French 10th Hussars.