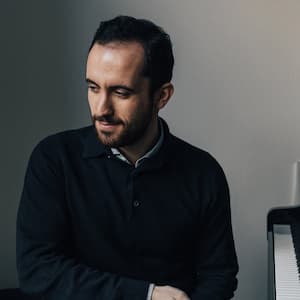 Empty concert halls. The idea of listening to and experiencing music together is gone – for now. It’s necessary, yet so sad. But it’s ok. Still: I’d like to continue sharing music with you. Listening. Experiencing. Whatever works. So I’m going to try something: private concerts.
— Igor Levit (@igorpianist) March 12, 2020

You’re the audience. Starting today, 7pm EST, I’ll play something for you from my home, here on twitter. Which repertoire? I’ve got no idea yet. We’ll see. It’s an experiment. Social Media House Concert until we meet again to do this in real life. So: tonight, 7pm.
— Igor Levit (@igorpianist) March 12, 2020

He then rushed out of his flat to purchase a cheap camera stand, returned home, then realised he also needed a stand for his phone, so he slipped out again. A friend was co-opted to help ensure the livestream was working. At 7pm Berlin time, Igor Levit gave his first livestreamed “haus konzert”.

Two days before, on 10 March, his birthday, Levit gave a concert in Hamburg; the next, in Cologne, the following day was cancelled, and it was now clear that live music, and similar activities, were being shut down, who knew for how long, in response to the global coronavirus pandemic.

And So It Goes (Billy Joel). Yoga performance by Igor Levit 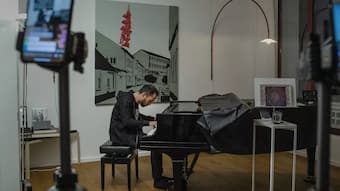 Levit gave 52 house concerts via Twitter, dressed casually and livestreamed from his flat, its minimalist decor interrupted only by the shiny grand piano and a striking painting on the wall behind. It became a nightly ritual, for pianist and audience. He performed whatever repertoire “felt right” – from Beethoven to Morton Feldman, Nina Simone to Schubert and Bach; it didn’t matter, for these performances were about being together when we were isolated in lockdown. Hundreds of thousands of people tuned in via Twitter every night and the livestream feed was crammed with comments, compliments, emojis; there was a potent sense of a shared experience, even though we were all listening on our own, separated by lockdown, yet together. Spontaneous and unplanned, these house concerts helped to alleviate Levit’s – and others’ – lockdown despair and isolation, a means of keeping live music going when it was unclear when we would be allowed back into the concert halls to enjoy live music again, together. The Observer (UK) chose Levit’s online recitals as number one in its top ten classical picks for 2020.

From a pragmatic point of view, the house concerts were also an incentive for Levit to keep practising, an impulse shared by so many musicians whose performing careers stopped dead in March 2020. Like many of his musician colleagues, in the months before the covid lockdowns, Levit was enjoying a busy career: without concerts, what was the point of practising?

Igor Levit’s new book ‘House Concert’ (published in the UK by Polity press in November) is about these Twitter concerts – the musician’s need to play, to express oneself through music, and the experience of playing in isolation to an unseen audience of tens or even hundreds of thousands – but it’s about much more than this too. 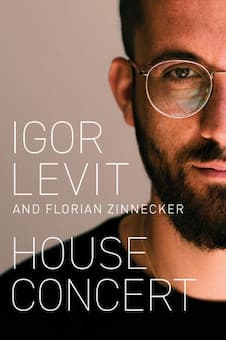 Organised in a series of conversations and diary-type entries between Levit and German journalist Florian Zinnecker, ‘House Concert’ explores what it is to be a professional musician in the 21st century, and charts Levit’s career from an unknown young pianist to an internationally-acclaimed performer who plays to sold-out houses around the world. It’s about the development of an artist; what it means to “be” a pianist and the need to perform, to share one’s music with others; the role and power of social media, in particular Twitter; the classical music industry; and wider issues of whether it is appropriate for an artist to engage in politics and other pertinent issues of our time – the pandemic, racism, climate change.

Levit’s path to international fame was not an easy one. As anyone who has attended one of his concerts will know, he is an uncompromising player who has a remarkable ability to create an intensity of sound and concentrated emotion when he performs (Alex Ross of The New Yorker describes him as “a pianist like no other”). His choice of repertoire may be considered “narrow” by some: eschewing the big showpieces or “top of the pops” of the pianist’s repertoire, he has instead chosen to focus on a handful of composers, recording and performing the complete piano sonatas of Beethoven, Bach’s Goldberg Variations, and Rzewski’s mighty ‘The People United Will Never Be Defeated’, together with lesser-known works by Busoni, Reger and Ronald Stevenson. As a young pianist at the start of his career, his uncompromising attitude and refusal to “play to the gallery”, as it were, to satisfy the whims of the market by including the popular classics in his programmes, meant that he was overlooked by artist managers and agents who felt he was not sufficiently marketable. This section of the book offers some really fascinating, honest and sometimes brutal insights into the workings and attitudes of the classical music “industry” today – where marketability is placed above artistic integrity. Levit didn’t fit the image that record companies were looking for and he was not willing to compromise; as a consequence, it was a long time before he was picked up by a manager who was sufficiently sympathetic to his way of doing things. (An indication of how the industry reacts to the maverick, when Levit recorded Beethoven’s last five piano sonatas for his debut disc, there were more than a few mutterings that he was too young, that it was an impertinence that he should record these works at his age. It was a risk, but it was a worthwhile one: as anyone who has heard Levit perform late Beethoven knows, he is a master in this repertoire.)

The Twitter concerts throw an interesting light on the ecosystem of the classical music business and the power structures within it. In his house concerts, Levit demonstrated that it was possible to reach an audience directly via social media, without the usual tools of the business – marketing, publicity, staging. The simplicity of the Twitter concerts made them special – and for Levit they made him feel strong, that he wasn’t a fake.

For the pianist, Levit makes some challenging assertions regarding interpretation, context, and the over-intellectualisation of music and its performance. He eschews the notion that music must have “meaning” or a distinct narrative, or that there is a “right way” to play it, and feels it is “just there to be experienced”. He sees the role of the musician as an “enabler”, one who brings the music to life from the page by making the piece his own.
“I’m telling my own story…the one that’s closest to my heart. The information about what happened to this piece one hundred, two hundred, three hundred years ago isn’t really my business.”

In the realm of classical music, with all its conventions and tradition, where fidelity to the score and an appreciation of the context in which the music is written is regarded as essential to any “authentic” performance, Levit bucks the trend. Because he’s not interested in tradition or convention; for him, it’s all about the music. He’s not interested in whether in his performances of Beethoven we hear the sound of Beethoven. For him, “it’s Beethoven, of course, but played by me.”

A keen activist, the book also explores Levit’s vocal opposition to German right-wing attitudes to immigration, anti-Semitism and online hate crime, and his advocacy for environmentalism, and the plight of Syrian refugees. He’s received abuse and even death threats for his views but he refuses to submit to “artistic neutrality”. Does he believe music can make a difference, shift attitudes and effect change? Absolutely not: “If you believe music will make fascists less fascist, then you’re just naive” – and for this reason, his music and his activism are kept largely separate, though his large social media following and reputation undoubtedly serve his activism.

This absorbing and highly readable book is neither diary nor straightforward artist biography. It shifts back and forth between periods in Levit’s life, from student days, to now, and explores a variety of themes, not all of them musical. It not only showcases the remarkable achievements of a charismatic classical musician, it also reveals their anxieties and doubts, strengths and weaknesses, and offers an important snapshot of the difficulties faced by professional musicians in a highly competitive industry riven with convention, power structures, and tradition. The success of Levit’s house concerts – and similar livestream projects from other musicians all around the world – perhaps prove that the industry does not necessarily need all the trappings of “the business” to communicate and share the power and joy of music with others.

The English-language edition of House Concert is published by Polity press in November 2022. The book is also available in German.