Ralph Vaughan Williams (1872-1958) took British music out of its German mindset and gave it its own voice. His 150th anniversary will occur on 12 October and a new version of one of his most famous pieces lets us hear him again in a new vein.

Vaughan Williams worked in all genres: opera and ballet; symphonies (he wrote 9); orchestral music, the most famous of which is his Fantasia on a Theme by Thomas Tallis (1910, revised 1913 and 1919); he wrote numerous concertos, including concertos for harmonica, for tuba, for piano, and for all string instruments, the most performed is The Lark Ascending (1914) for violin and orchestra; choral works, hymn tunes, carols, and vocal works; pieces for concert and wind bands, pieces for chamber ensemble, including two string quartets; works for keyboard, for piano and for organ; and film scores, radio scores. Few modern composers have worked across such a wide range of classical music.

In short, he touched so many aspects of music that little in British music was not affected by his presence. His greatest influence came from his 20 years at the Royal College of Music where his list of students includes others who would go on to define British music. 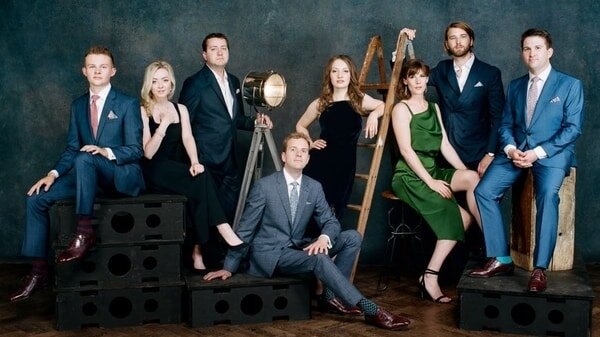 His works were not always appreciated at their first hearing but over the decades, have become familiar in the repertoire. Many of his works cross genres, such as his operas, which he variously described as ‘masque’ or ‘romantic extravaganza’. Only one opera was really labelled an opera (Sir John in Love, based on The Merry Wives of Windsor). Unfortunately, many of his operas were originally staged at the RCM in amateur performances that have largely kept them out of the professional repertoire. One of the elements of his operas that marked them as different was his preference for long tableaux scenes, where he let the music speak for itself. This predilection proved to be more successful in his ballets, where long musical scenes are more the norm.

Vaughan Williams regarded the human voice as the oldest and greatest of musical instruments and it is an honour of this and his anniversary that the English vocal group VOCES8 has combined with the violinist Jack Liebeck to create a new vocal take on Vaughan Williams’ masterpiece The Lark Ascending. The arrangement, by Paul Drayton, goes back to the original poem by George Meredith that inspired RVW, and uses text from the poem as part of the vocal setting.

Also in honour of RVW (as he’s usually known), VOCES8 will be broadcasting a LIVE from London online concert on 15 October that will include this new version of The Lark, and a new work by Christopher Tin, The Lost Birds, an elegy for the loss of birds and bird species due to human activity.

Meet the master of English music by hearing him in a different way.