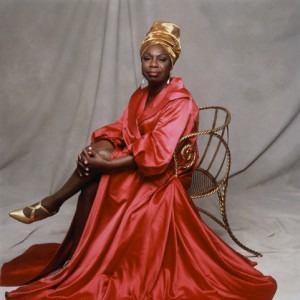 Can you be a true artist without reflecting the times, without a compelling message? Nina Simone, the “High Priestess of Soul,” was one of the first African American women who openly expressed her feelings and philosophy through her music during the volatile civil rights era. Pianist, composer, arranger and singer with a deep contralto voice, Simone was a spellbinding artist whose passionate musical storytelling was utterly unique. Simone wanted, “…to make people feel on a deep level…to shake them up …when you’ve got the audience hooked…it’s like electricity hanging in the air.” (From her 1991 autobiography, I Put A Spell On You.)

During her singular career, which spanned over four decades, she produced more than 40 albums, and sold over one million CDs in the last decade of her life alone, becoming known for her wide range of songs—her own compositions, new arrangements of existing popular tunes and music written especially for her—her personality sinuous, enigmatic, captivating.

She was born in 1933 in Tyron, North Carolina to an impoverished family. Her mother, a Methodist preacher and housecleaner, named her sixth child Eunice Waymon. Eunice started to play the piano by ear at the age of three and soon was performing at the local church. People came just to hear her play. When she was seven years old she accompanied the choir in a program that was attended by two white women who were so impressed with Eunice’s talent that one said to the other, “if you will teach her I’ll pay for it.” Despite the very real dangers of crossing the railroad tracks every weekend to the white side of the city, Eunice pursued her training, practicing seven hours a day. Falling in love with classical music, she reveled in the music of Bach, Beethoven, Rachmaninoff and Liszt and wanted to become one of the world’s greatest pianists. 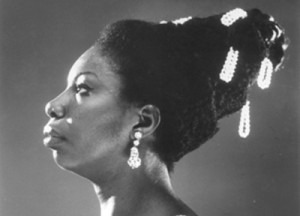 During a recital when she was twelve she had her first encounter with racial prejudice. Her parents had sat in the first row, as any proud parent would. Before the concert began they were forced to stand at the back of the hall to make room for white audience members. Eunice refused to play until her parents were allowed to return to their original seats.

The community skimped and saved so that Eunice would be able to travel to New York to study at the Juilliard School after high school. Money would soon run out. The entire family moved to Philadelphia so that she could attend the Curtis Institute of Music where tuition was free. Eunice was not accepted to Curtis because of her race. She never recovered.

Eunice was forced to go to work in a shabby bar to support her family. She was told she would have to sing as well as play the piano. She had never sung before. It was an isolated and lonely life playing late into the night, living in dilapidated dressing rooms. Eunice changed her name to Nina Simone because her fervently religious mother would never have approved of her playing “the devil’s music.”

Simone gradually developed her innovative sound. She had the skill and discipline of classical music and she wove classical techniques such as counterpoint into her compositions and improvisations suffusing spirituals, jazz, pop, folk and gospel songs with depth and originality. Her singular gravelly voice had the complexity of a baritone and transmitted deep emotional insights to her audiences. Nobody sounded like she did. 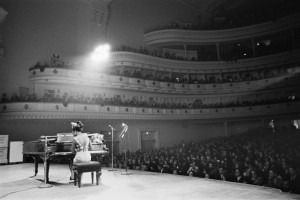 Her exquisite recording of I loves you Porgy led to instant stardom, breaking into New York’s classier venues in Greenwich Village in 1958, but she knew nothing about the business—she was only twenty-four—and signed away the rights to her first album for $3,000. which eventually grossed one million dollars.

Simone soon met and married a tough New York City cop, Andrew Stroud—a bully and opportunist. Stroud quit his job to manage Simone’s career. He booked Simone night after night, in country after country. It was draining to be on the road all the time but she was able to rub shoulders with the finest African American artists—poet Langston Hughes, author James Baldwin and Lorrain Hansberry, another young woman, the first successful African American playwright on Broadway.

Onstage Simone engaged with her audience establishing a special connection to them. She demanded the kind of respect and attentive listening that one expected of classical music audiences telling the audience to be quiet, to sit down. Simone’s hot temper and moodiness increased. She felt trapped by her unrelenting schedule and the abusive relationship with Stroud.

Simone fantasized about performing in Carnegie Hall. Stroud decided to fund it. “I’m in Carnegie Hall finally.” she said, “but I should have been playing Bach.” The concert happened to coincide with the arrest of Dr. Martin Luther King Jr. and other protesters on April 12, 1963.

The murder of Medgar Evers and four young African-American girls in Birmingham in 1963 transformed her career. Channeling her rage she wrote Mississippi Goddam in one hour—the first time anyone had used profanity publicly. Coming from an artist of her stature the song caused a furor. Boxes of her records were sent back to her cracked in two. Bookings fizzled.

In March of 1965 Harry Belafonte organized a concert outside of Montgomery, Alabama at the request of Dr. King during the culmination of the Selma-to-Montgomery protest march. Leonard Bernstein, Tony Bennett, Johnny Mathis, James Baldwin, Sammy Davis Jr., Anthony Perkins and Joan Baez appeared but Simone stole the show with Mississippi Goddam—an exceedingly dangerous and courageous undertaking.

She became a ferocious activist later composing what would become “The National Anthem of Black America” the song To Be Young, Gifted and Black inspired by Lorraine Hansberry.

To Be Young Gifted and Black with short interview

The civil rights movement was sidetracked at the advent of the Viet Nam War. Simone couldn’t carry the flag by herself. She became bitter and angry, slipping into depression and violent behavior, her mental health affected. Somehow she continued her great music making.

Few artists at that time were willing to risk their reputations. Nina Simone sacrificed her personal life for music that would affect social change.

She received fifteen Grammy Award nominations, influenced countless musicians and inspired several documentary films including the 2015 Sundance Festival film What Happened Miss Simone? Ironically, two days before she died in 2003 she received an honorary degree from the Curtis Institute.

Documentary on Nina Simone the Legend