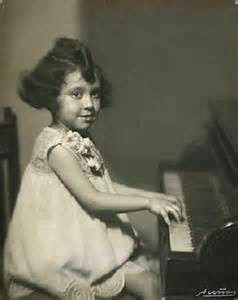 Spanish pianist Alica de Larrocha was a favorite artist at our home when I was growing up and not just because of her diminutive stature. (She was less than five feet tall—like me!) Later in my life I was privileged to perform with her when she appeared as soloist with the Minnesota Orchestra and what a dynamo. She performed a vast repertory with a large, beautiful sound that included romantic works—even Grieg, Liszt and Rachmaninoff as well as Mozart and Beethoven with pure, elegant playing interpretively as fine as lace. Her manager, Herbert Breslin, put it succinctly, “what I think makes her a phenomenon is that she doesn’t give the impression of being a great personality. She’s cool as a cucumber. Onstage, she doesn’t even like to look at the audience. So what the public is responding to is something in the music.”

One memorable concert broke my heart. The performance had received a less than enthusiastic review. None of us knew that Alicia, always the quintessential professional, had appeared for the evening performance just after hearing that her husband had been taken to the hospital in a very serious condition. Cancelling and disappointing the audience was not even a consideration.

De Larrocha was born in Barcelona, Spain in 1923. Ms. de Larrocha’s aunt happened to be a piano teacher at the Academia Marshall, a school founded by the pianist Frank Marshall. 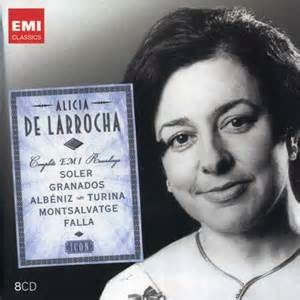 When de Larrocha was 3 years old she heard her aunt working with piano students. Alicia astonished everyone. Immediately after hearing these lessons she could reproduce the music by ear. When Alicia subsequently demanded piano lessons, her aunt took her to see Marshall. He was nonplussed, said it was much too early to start piano lessons, and instructed Alicia’s aunt to lock the instrument and keep Alicia away from the piano. Entirely unacceptable to the three-year-old, she banged her head on the floor until Marshall had to give in and accept her as a student.

Her concert debut included works by Bach and Mozart at the 1929 International Exhibition in Barcelona. She was five years old. By age eleven, her orchestral debut had occurred in Madrid. 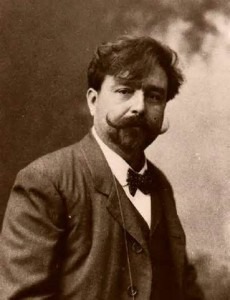 De Larrocha championed the music of Spain. Introducing the works of Spanish composers to the larger music world was her legacy. Alicia de Larrocha’s definitive interpretations of Albéniz, Granados, Mompou and other Spanish composers, are unrivaled.

Although Alicia’s mother and aunt studied with Granados and admired him, de Larrocha refused to play favorites. In the New York Times, of September 2009, she is quoted as saying,

“I don’t believe there is a ‘best’ of anything in this life,” she said in a 1978 interview with Contemporary Keyboard. “I would say, though, that Granados was one of the great Spanish composers, and that, in my opinion, he was the only one that captured the real Romantic flavor. His style was aristocratic, elegant and poetic — completely different from Falla and Albéniz. To me, each of them is a different world. Falla was the one who really captured the spirit of the Gypsy music. And Albéniz, I think was more international than the others.”


Albéniz indeed was a leading figure in the creation of a Spanish national style of composition. He is best known for his piano music most notably his final masterpiece Iberia of 1908—a suite of twelve piano impressions in four books. The work was not recorded in its entirety until de Larrocha recorded it in 1960. (Subsequently she recorded the work two more times.) Her interpretation is stunning and virtuosic—a synthesis of the dance rhythms of Spain, the deep profound singing style of flamenco, and exotic scale patterns. Several orchestral transcriptions were made of the piano work, which are enchanting, colorful and very popular with audiences and musicians alike.

Alicia de Larrocha made a huge contribution to music via her advocacy of Spanish and Catalonian piano music. Her interpretations of the music of Albéniz, Granados, de Falla, Mompou (who dedicated several works to her) and Motsalvatge are flawless, elegant and evocative.

Alicia was also a wonderful colleague and she was known for her collaborations with singers Victoria de los Angeles, Montserrat Caballé, and the Guarneri and Tokyo Quartets. She played Poulenc’s Concerto for two pianos with the composer at the second piano and she performed at the Mostly Mozart Festival over eighty times.

Eventually, she became the director of the Academia Marshall in 1959—replacing her old nemesis. Her recordings garnered many awards including Grammys, the Edison Prize, the Grand Prix des Disques, among others and Alicia performed and travelled worldwide until she retired at age eighty.

Ms. De Larrocha disliked being recorded on video. She felt that music must be heard and listened to, not watched. We are so fortunate to have several wonderful videos of her playing nonetheless. And she had a sense of humor as you can see in the video with Dudley Moore (pianist and comedian.)