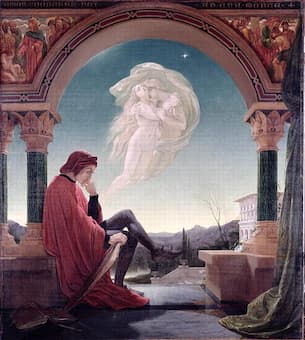 Dante Alighieri (1265-1321) was a keen observer of the human condition, and a number of his contemporaries become important characters in his “Divine Comedy.” One such contemporary was Francesca da Rimini, the daughter of Guido da Polenta of Ravenna. Francesca was forced into a political marriage to secure the peace between two feuding families. As it happens, Francesca falls in love with Paolo, her husband’s brother. Paolo is married as well, but they nevertheless manage to carry on a concealed affair for at least ten years. In the end, the lovers are discovered in Francesca’s bedroom and both killed by her husband. 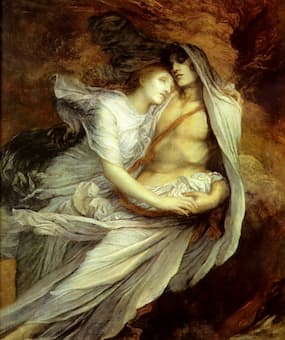 Literary speaking, we meet Francesca and Paolo in the first volume of Dante’s “Divine Comedy.” They are trapped in the second circle of hell, reserved for the lustful. Eternally confined, the couple is “doomed to be forever swept through the air just as they allowed themselves to be swept away by their passions.” Dante and Francesca have a conversation, and she explains what led to her and Paolo’s damnation. Her story is so powerful that Dante faints out of pity. 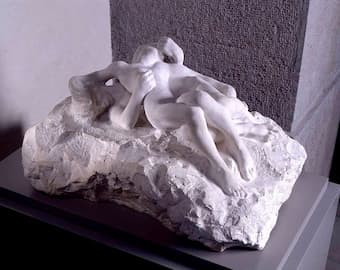 Rachmaninoff started work on his opera Francesca da Rimini in 1900 and completed it roughly five years later. The opera features a lengthy prologue and epilogue, which sets the scene in the second circle of Hell. Dante (tenor), is guided by the shade of Virgil (baritone), accosting the wind-buffeted spirits of Francesca (soprano) and her lover Paolo Malatesta (tenor). The opera was not a rousing success, and blame has always been assigned to the librettist Modest Tchaikovsky. 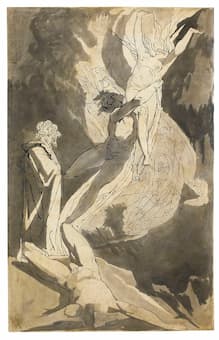 Since the story of Paolo and Francesca occupies only a dozen lines in Dante, and Modest also needed to invent a big part for the star singer Chaliapin, it never really worked on stage. Rachmaninoff’s music, however, is a different story. He composes a fine portrait of sorrowing jealously, and Francesca sings her vain plea for redemption with great passion. Francesca’s most famous lines “There is no greater sorrow than to recall a happy time in wretchedness; and this your teacher knows,” becomes the emotional center of the work. When the lovers are found out, Paolo is reading to Francesca of Lancelot’s infatuation with the married Guinevere. Francesca tells him “while their love is not for this world, eternal bliss awaits them in heaven.” As we all know, there is no such happy ending as the cries of Francesca and Paolo once again merge with the howls of the tormented. “For pity I fainted as if I were dying,” writes Dante at the end of Canto V, “and I fell as a dead body falls.” 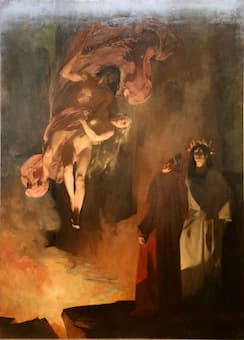 The American church musician and music teacher Arthur William Foote (1853-1937) was a leading member of a group of composers known as the “Boston Six.” He started music lessons only at the age of 12, but progressed rapidly to enter Harvard University to study both music and law. Foote opened a studio for teaching piano, which he maintained for fifty years. He also became the organist for the First Unitarian Church in Boston, and served on the faculty of the New England Conservatory teaching piano and piano pedagogy. Foote had a keen interest in German music, and traveled to the first Bayreuth Festival in 1876. A good number of his most popular works are influenced by his encounter with Wagner and Brahms, and that includes the symphonic prologue Francesca da Rimini. 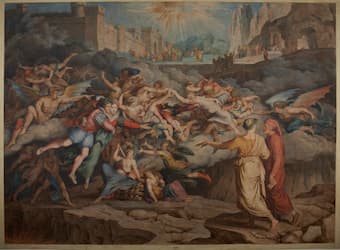 Joseph Anton Koch: Dante and Virgil in the Second Circle in Hell

Based on the fifth Canto of the Inferno, “it is a fine example of his command of broadly conceived structure as well as of his powerfully expressive musical language.” Foote willingly flouts conventional tonal schemes, and hurried sections are delightfully punctuated by forceful passage in recitative style. 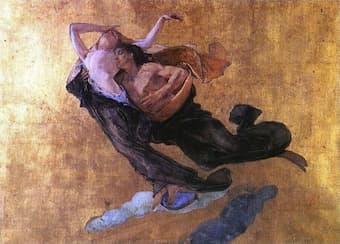 Saverio Mercadante (1795-1870) may not be a household name today, but he was a serious rival to Donizetti, Rossini, and Bellini. Furthermore, his development of operatic structures, melodic styles and orchestration established the foundation of Giuseppe Verdi’s dramatic technique. Mercadante composed more than sixty opera for some of the most illustrious opera houses in Europe. His opera Francesca di Rimini was composed for Madrid in 1830, but because of various misadventures and accidents it was never staged. It finally played 160 years later at the Festival della Valle d’Itria. This delightful bel canto opera is a tuneful and engaging melodramatic story that “puts vocal brilliance and endurance on display.” The text was compiled by Felice Romani, the outstanding librettist of his time. He constructed a plot that addresses themes still current in our time, “including marital deceit, sibling rivalry, and honour killing.” Mercadante, in turn, musically explores the juxtaposition of public obligation as represented by the marriage of warring families, and private desire such as adultery. “Mercadante’s music is melodic and artfully constructed with a high professional polish, which is perhaps why Mercadante was so popular in his time.” 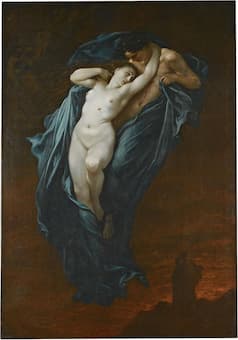 Scholars have suggested that Pyotr Ilyich Tchaikovsky “found the ideal musical form for the essential story, framing the long, unbroken line of Francesca’s sad tale with a vivid evocation of Dante’s infernal whirlwind, which never rests.” In fact, Tchaikovsky wrote out a detailed program at the start of his manuscript score of the fantasia. “Dante, accompanied by Virgil’s ghost, descends into the second circle of the Hellish abyss. Here the walls echo with cries of despair. In the midst of the Stygian gloom is a fantastic storm. Violent, Hellish whirlwinds carry away tormented souls. Out of the countless spinning earthly spirits, Dante notices two in particular: Francesca and Paolo, who are locked in an embrace. Dante calls out to these tortured souls, and asks them for what terrible crimes they were being punished. Francesca’s spirit, drenched with tears, recounts their pitiful tale. She was in love with Paolo, but against her will she was forced to marry the hateful brother of her beloved, the hunchbacked, twisted tyrant of Rimini. Despite his violent jealousy, he was not able to wrest Francesca’s heart from her passion for Paolo…”
Francesca da Rimini was performed for the first time with great success in Moscow in 1877, and initially Tchaikovsky thought highly of this composition. Although the composer subsequently changed his mind, Francesca da Rimini became one of the most celebrated pieces of Russian classical music. 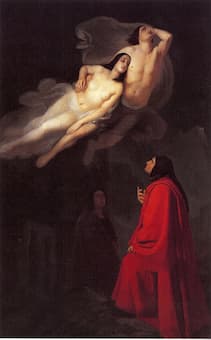 The drama Francesca da Rimini by Gabriele D’Annunzio caused a scandal in Rome in 1901. It had been written for his mistress, the actress Eleonara Duse, and it depicts Francesca as a deceived female lover who disregarded her arranged marriage. “She claimed her right to true love, and for this very reason is murdered.” D’Annunzio saw Francesca as a “woman who engages in morally ambivalent actions in politically dark times and follows her own desire.” The poet tellingly defined the play as “an epic of blood and lust.” The Ricordi publishing house saw an opportunity, and Tito Ricordi engaged the young composer Riccardo Zandonai (1883–1944). The libretto needed a good deal of adaption, but what emerged in the end was the story of Francesca as outlined by Dante but with “increased sensuality and darker, more amoral overtones.” Francesca da Rimini is widely considered Zandonai’s masterpiece, and “one of the most original and polished Italian melodramas of the 20th century.” The composer has a powerful gift for writing Italian melody and an exceptional command of orchestration. Critics have suggested, “Zandonai wrote inspired music with a magical effect not to be found in other contemporary composers. His evocation of atmosphere with some careful use of ancient instruments, and the delicate treatment of female choruses provides for a somewhat distant yet heavy and erotic atmosphere.” 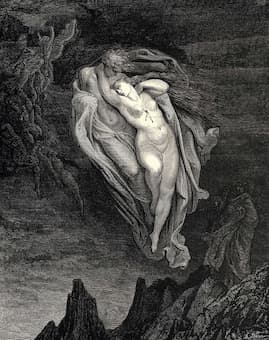 Luigi Mancinelli (1848-1921) established his early reputation in Perugia and Bologna, but mostly worked as a principal conductor in London, New York, Madrid, Rio de Janeiro and Buenos Aires. He was also noted as a composer of works for the stage, concert hall, church, and for early cinema. His Paolo e Francesca dates from 1907 and did initially not enthuse the audience. However, the music is both rich in texture and has moments of real inspiration. Mancinelli’s lack of success as a composer “was probably caused partly by a dramatic temperament strongly at variance with the dominating currents in Italian opera at the time, as manifested in the verismo school and Puccini. This is evident also in his rather abstract treatment of his character, a tendency emphasized by his lack of facility in creating memorable melodies.” Francesca da Rimini has continued to inspire countless interpretations, including an opera by Ambroise Thomas. Paul Taffanel (1844-1908), considered the founder of the French flute school, based his arrangement on the instrumental passages from the original opera score.