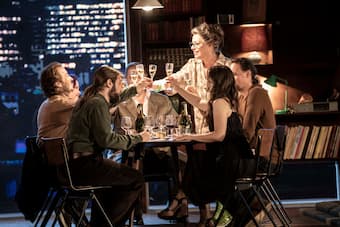 Aix-en-Provence’s longstanding summer music festival commands a somewhat inconspicuous position in the European landscape of music festivals. While the Festspiele dominate Salzburg during the summer months, the performances in the arena define Verona during their season, and Bayreuth pulsates during the Wagner festival, the festival in Aix-en-Provence seems a mere sideshow among the summer tourists and university students on break hanging out in the streets until the wee hours. The city also makes no allowances for festival visitors; no effort is made for easier transport access, and restaurants stubbornly stick to their usual opening hours and have little visible interest in entertaining pre-or post-performance supper guests. 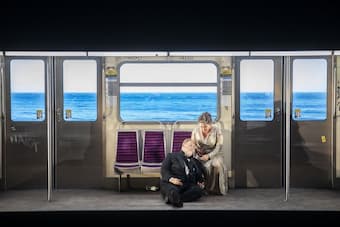 While the most inspired venue, the Courtyard of the Archbishop’s palace, is uniquely atmospheric, the same cannot be said of the Grand Théâtre de Provence. The theatre, opened in 2007, is bereft of any sense of arrival, with the entrance through a recessed pit that offers nothing of any interest, other than a lack of fresh air. The theatre itself is unimaginatively laid out, provides difficult access, and has some of the most inconvenient sanitary facilities this correspondent has ever encountered. While all seats have good visibility, the acoustics are pedestrian, something which was exacerbated by boxed-in stage sets. Notwithstanding any quibbles, the entire audience was visibly delighted to be back after a long Covid absence, and sat patiently and masked in a non-socially distanced and packed theatre. 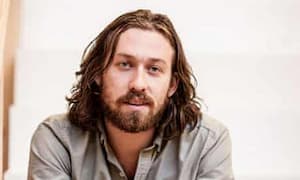 This new production of Richard Wagner’s seminal opera Tristan und Isolde, a co-production with the theatres of the city of Luxembourg, led by Australian director Simon Stone, was visually arresting (stage sets by Ralph Myers) and at times entertaining, but it had no seriously believable relationship to the text or the music, no matter how hard the director tried to explain his vision. His attempts to create a story within a story or an interpretation around passion, suffering and betrayal was consistently and irritatingly contradicted by Wagner’s music and lyrics. 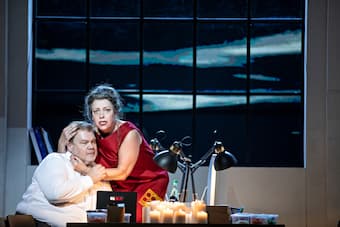 The opening sequence during the Vorspiel showed a party of friends, where Isolde spots a cheating Tristan. This led to a suggestion we would witness a promising dreamlike interpretation, but this was completely ruptured in the second act which was situated in a Parisian architect’s office. King Marke appeared as the office manager looking more like a zero-humoured Ricky Gervais, upset at the inter-office affair of his staff Tristan and Isolde. The final act, set in a grotty Paris metro carriage (though admirable in terms of authenticity) with all protagonists dressed up as revellers returning by train from some party, was particularly hard to stomach.

Nothing could diminish the ludicrousness of Kurwenal telling Tristan about their presence in Kareol (in Brittany), when Paris’ banlieue metro signs whiz by. Tristan surviving not one – but two – bloody knifing attacks further stretched credibility. Isolde’s angrily discarding her wedding ring and walking out on Tristan in the metro carriage might be the thread that should hold together Stone’s unique interpretation. But that thread is very thin indeed.

Wagner’s idiosyncratic harmonic suspension and the unresolved cadences which find their climactic release in the Liebestod sort of lose their lustre when Stemme is forced to sing it sitting in a crammed metro while surrounded by passengers, bums and her grumpy looking but quite alive husband. Stone’s interpretation might occasionally be fun to watch, but it is more often just distracting and irritating, and ultimately frivolous.

A totally parallel universe, however, could be found in the musical arena. While the singers good-naturedly play along with Stone’s vision, they deliver a gobsmacking performance. Nina Stemme clearly made the best of the Covid break to let her voice recover from some reported signs of wear and tear. She was absolutely roaring in this titanic role. Controlling her beautiful and warm voice, she elicited the most lyrical and delicate passages, while handily drowning out the formidable London Symphony Orchestra when appropriate. Witnessing a true Wagnerian soprano like Stemme at her prime is a privilege. Covid extended this privilege for all of us. 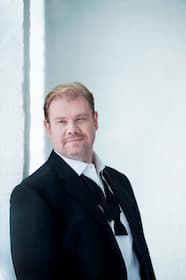 Stuart Skelton clearly also made use of the Covid break to cement his heavy Wagnerian credentials. He sounded tirelessly powerful and engaged, and in spite of occasional scooping delivered an impressive, believable and convincingly sung hero, even when dragging around the metro carriage in some of Paris’s least salubrious neighbourhoods. 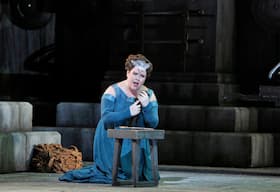 Jamie Barton was a slightly surprising Brangaene. Her background doesn’t seem to presage a Wagnerian career, yet she embraced the role of Isolde’s confidante with passion, dramatic panache and captivating vocal resources. Her famous warning (Einsam wachend in der Nacht), delivered from the orchestra pit for no obvious directorial reason, was nothing short of spectacular. 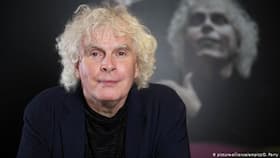 Franz-Josef Selig as King Marke, the only German in the cast, was a reminder of what a top tier Wagnerian bass sounds like. Noteworthy new voices were Josef Wagner as Kurwenal and Dominic Sedgewick as Melot.

Another superstar stood in the pit. Simon Rattle excelled at the helm of the London Symphony Orchestra which amazingly had never played this opera in its entirety. Rattle gave this very long opera the speed it needed, while generously working out the filigree passages. Unlike Stone, Rattle knew exactly on what track he was leading this sensational opera.