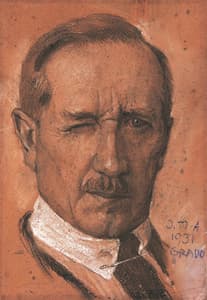 After the overwhelming flood of Beethoven during the 2020 Beethoven Year, it’s a pleasure to see a different view of the man’s works. Beethoven’s Pastoral Symphony was the inspiration for Viennese Jugendstil artist and Klimt colleague Josef Maria Auchentaller (1865-1949) to create paintings based on each of the symphony’s movements. This work took a decade, from 1889 to 1899, to complete and each family that has owned it moved it to each of their new properties.

Beethoven’s Sixth Symphony (Symphony No. 6 in F major, Op. 68) was completed in 1808 and received its premiere at the infamous 22 December 1808 concert at the Theater an der Wien in Vienna. This concert, a benefit for Beethoven, was 4 hours long and the audience froze in the cold hall as they listened to the premieres of Beethoven’s Symphonies No. 5 and 6, the Fourth Piano Concerto, and the Choral Fantasy.

Beethoven’s love of nature comes to the fore in his sixth symphony, and he made this explicit through his highly descriptive titles for each of the movements:

II. Szene am Bach (Scene by the brook) 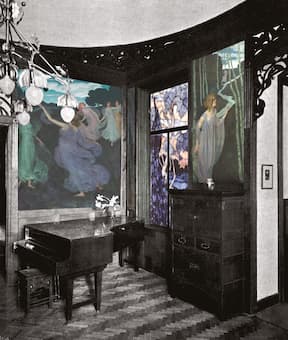 Auchentaller created his series of 5 paintings for the music room the Villa Scheid, owned by his father-in-law, the jewelry manufacturer Georg Adam Scheid. The work is unique in that it was the first artistic realization of a Beethoven symphony. The idea of the music room was one that was common to many homes at the turn of the 19th century. Middle-class ownership of a piano spurred people to build rooms for music making and sometimes these were quite elaborate.

For the artists of the Vienna Secession, Beethoven was the god of composers. In The Secession Building in Vienna, Gustav Klimt created the Beethoven Frieze, which carries the viewer from a ‘yearning for happiness’ to ‘the arts’ which ‘lead us to the ideal realm…’ to Paradise. Auchentaller created a now-lost counterpart to Klimt’s work entitled Joy, Fair Spark of the Gods. 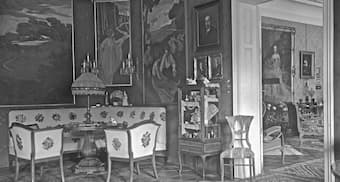 The original room in the Villa Scheid only held these paintings for 12 years. In 1911, the villa was sold and the pictures were moved to the Landhaus Scheide in Maria Enzerdof, to the south of Vienna. They were moved again in 1925 when they were in the possession of the Thonet family and moved to their house. Martha Thonet was a daughter of Georg Adam Scheid. The paintings were moved again in 1938 to a different Thonet house in upper Austria.

In the Villa Scheid, the pictures were built into the paneling, as shown in the photomontage recreating the original room. The stained-glass window in the corner, also by Auchentaller, was destroyed when the Villa Scheid was sold.

In the Villa Sheid, the paintings had been built into the paneling, now in the Thonet rooms, they have been separated and framed. This picture of the Thonet music room shows the pictures now in frames and gives a better idea of just how big these paintings were. There’s some idea that the pictures were shortened in their various moves and perhaps the bottom sections of these paintings, where the dresses are cut off, show this pruning.

Why the sixth symphony? Beethoven’s rare programmatic work was ideal inspiration for a painter who wanted to delve deeper into Beethoven’s sound world and the work was a favorite in the Scheid household. Everyone in the Scheid family could play the symphony on the piano. And, in its second ownership by the daughter, Martha Thonet, it was in the hands of skilled pianist. The Thonet family had had two grand pianos in their music room: a Steinway and a Bösendorfer.

Auchentaller put ‘elves’ into his first two movement canvases, the first with 5 elf girls, in actuality the 5 Scheid daughters: Emma, Ida, Martha, Else, and Minni. Emma married J.M. Auchentaller, Martha married Viktor Thonet, a furniture maker, and Else married Joseph Hackhofer, an architect. As we will see in all these paintings, Auchentaller keeps the light to the back of the image, drawing your eye up and back. The elves dance on a flowering meadow beside a stream. 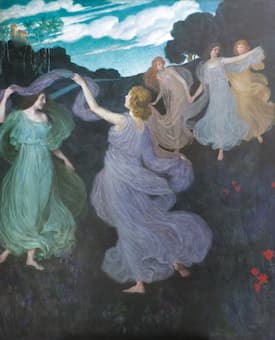 
In movement two, Elfen am Bach (Elves at the brook), we’ve moved to the left side of the first movement picture, by the stream in the birch trees, with two of the elf-sisters.


The third movement, Landleben (Country Life), shows the country folk dancing while two pipers play, sitting in the shade and refreshed by a jug of something. In the foreground, a young man looks intensely at a young woman – are they exhausted from dancing, or does he have something else in mind? The light in the background again draws our eye down the road to a cluster of houses and onward to a river and the mountains. 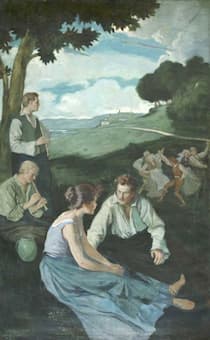 
The drama of the storm of the fourth movement comes out in Auchentaller’s two-part painting, Donner und Sturm (Thunder and Storm). Originally split over two canvases, it has been rejoined to show the storm in its fury. The birch trees bend in the wind, the rain descends in sheets, and we can see the flash of lightning in the clouds. Again, the light is moved to the back of the painting, as we imagine ourselves pelting down the road to find shelter. Even though Auchentaller is showing us lightning in the clouds, he’s called the picture Donner (Thunder), asking us to hear his painting. 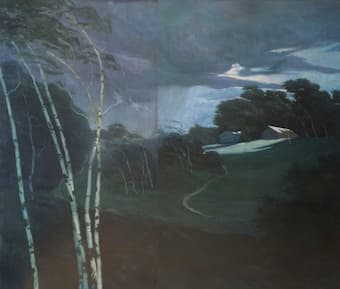 
Finally, the storm breaks and the fine weather returns. As evening falls, the farmers bring in their harvesting tools of a scythe and a rake, and, as the bells at the church sound for Vespers, one woman kneels in the lane. The sunset is in Beethoven’s music, but the church bells are Auchentaller’s own addition, as we can see from the title of this painting: Vesperläuten (Vesper Bells). As the sun sets, the clouds darken and, picking up the light, turn purple while the last blue sky signals the end of day. 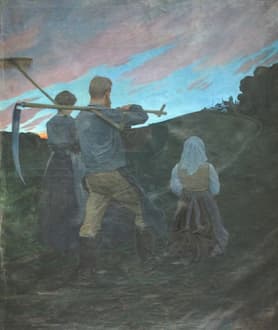 
We have to imagine elves in Beethoven’s music and imagine that we can hear the thunder of his lightning painting. We have to create stories for the couple in the third movement and imagine the sound of church bells in the last movement.

Fleshing out Beethoven’s movement titles by putting titles that caused listeners to hear sounds from his canvas and using his imagination about the action in the movement, Auchentaller created a unique monument to Beethoven, to music, and to imagination. Program music is written so audiences can follow the composer’s inspiration – in these paintings, we can follow one such audience member who summons up dancing elves, pipers, thunderstorms, and the sound of the evening bells to create his version of this symphony.

The Auchentaller paintings are currently being shown in Vienna at the Leopold Museums, in a recreation of the Thonet Musikzimmer as part of the Inspirational Beethoven exhibition, until 4 July 2021. 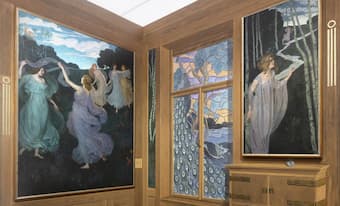 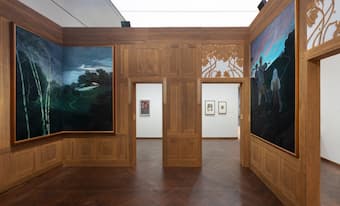