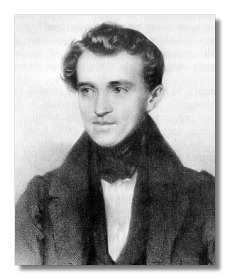 Johann Strauss II, or Junior, or the younger The Waltz King, (not related to Richard), composed over 400 of the world’s most beloved waltzes, polkas, quadrilles, dance music and operettas. These include the perennial favorites: An der Schonen Blauen Donau (The Beautiful Blue Danube), Tritsch-Tratsch Polka, Fruhlingsstimmen (Voices of Spring), Kaiser-Walzer (Emperor Waltz), and the comic operetta Die Fledermaus (The Bat). 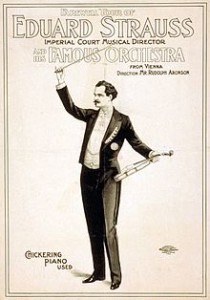 Johann Strauss was born in 1825. His father, Johann Strauss I, was the founder of the Strauss orchestra, and composer of the Radetzky March. This famous work, often featured as an encore piece, is infectious and inspires rhythmic clapping from the audience. Johann senior wanted his son to avoid the vicissitudes of life as a musician. He was determined that his son should become a banker—a respectable position. Johann Jr. was desperate to study the violin. He took lessons from a member of Johann senior’s orchestra in secret but one day Johann was discovered practicing the violin. Despite the severe whipping Johann received at the hand of his father it didn’t deter the younger Strauss. He continued his practicing. When he was ready to make his debut as a composer with his own orchestra, local establishments resisted employing him, afraid that they might anger Strauss I. Nonetheless, Dommayer’s Casino, the tavern where Strauss I had had many successes, decided to risk it and they invited Johann to perform. This sparked an intense rivalry between the two. Johann Senior was irate and he never performed at Dommayer’s again. Strauss II went on to become the more famous musical personality.

Johann Junior had many fans among the composers of the time including Richard Strauss who said, “How can I forget the laughing genius of Vienna?” 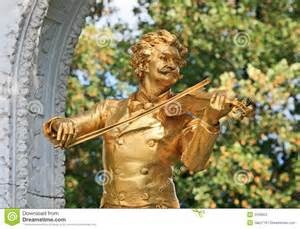 When the ladies in the audience were impressed with a performer or composer it was the custom to ask for their autograph. A fanciful fan was an important accessory for women in those days and the tradition was that the composer would scribble a few bars of one of their compositions as well as their signature on the fan. When Adele, Johann’s wife, approached Johannes Brahms for his autograph, Brahms immediately wrote out a few notes of The Blue Danube and added, “Unfortunately NOT by Johannes Brahms.”

Johann Junior had two younger brothers who were also amazingly gifted musicians—Josef and Eduard. Josef Strauss established himself as an architectural draftsman even though he excelled as a painter, poet, singer, composer, writer and inventor. Johann said of Josef, “He is the more gifted of us two; I am merely the more popular.” Johann was in constant demand both in Europe and overseas resulting in a nervous breakdown in 1853. Josef was the more introverted of the two, but it was he who was coerced by the family into taking over the Strauss orchestra and the family business while Johann recovered. Josef eventually gave up his career to compose over 300 dances and marches and 500 arrangements of music of other composers. One of the most loved polkas—the Pizzicato Polka for strings, which is plucked throughout— was a collaborative effort between Josef and Johann. Strauss Senior was right that music is a hazardous profession! Ironically, Josef died from a fall off the conductor’s podium. 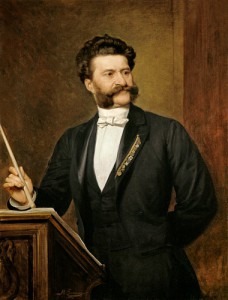 Eduard, the youngest brother’s first choice of a career was to serve in the diplomatic service as he was fluent in several languages. Eventually he joined the Strauss family orchestra as its harpist and then as conductor. Eduard was the least successful of the Strauss dynasty even though his output was prolific—over 320 dances, marches and witty polkas. It was as the conductor of the orchestra that he made his mark.

There is some discussion about Eduard’s behavior toward the end of his life. There had been considerable rivalry among the brothers. To his credit, Eduard did publish a catalog of the Strauss works, but in 1907 he had the Strauss collection incinerated. What were his motives? Had he made a pact with Josef that whoever outlived the other he would burn the family archives so that no other composer could claim any of their works, or was he embittered by his own lack of success as compared to the rest of the family? Fortunately, the collection was reconstructed some decades later.

Today the Strauss tradition continues in Vienna. A waltz orchestra performs in Stadt Park behind a huge golden statue of Johann, the Waltz King, conducting with his violin in hand. Each year on New Year’s Eve the Vienna Philharmonic performs these beloved works. The celebration, broadcast internationally, takes place at the Musikverein with its golden interior and frescoed ceilings. Next year don’t miss this fabulous presentation!

Orchestras everywhere perform the Strauss works as we did in the Minnesota Orchestra. During our annual “Sommerfest” each summer, we would play several sold out all-Strauss evenings. The works are as delightful to audiences today as they were when the Strauss family orchestra was at its epitome and the Strauss brothers were the darlings of Europe.