What do Kismet, Song of Norway, Gypsy Lady, and The Great Waltz all have in common? They were all productions using the music of long-dead composers with updated lyrics. 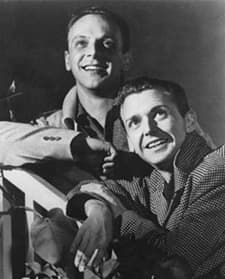 Robert Wright (1914-2005) worked with George Forrest (1915-1999) to bring classical music to the musical stage. Both men were credited as composer-lyricist, but George Forrest worked primarily on the musical side of things. Wright was born in Daytona Beach, Florida, and studied piano. He was active while in high school, working in vaudeville, played piano at a silent movie theater, and led his own orchestra. Together with George Forrest, they wrote the school song ‘Hail to Miami High’. This first collaboration would eventually lead to 16 produced stage musicals, 18 revues, music for dozens of films, and many club acts. After leaving high school the pair did a cross-country cabaret tour and eventually ended up in Hollywood, where they worked for MGM as songwriters for seven years. 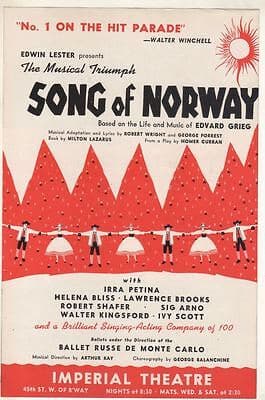 Their first Broadway production was Song of Norway in 1944, which took music from his piano concertos, from his violin sonatas, and many other sources.

Here’s Grieg’s Norwegian Dance No. 2, which was transformed into ‘Freddy and His Fiddle’. 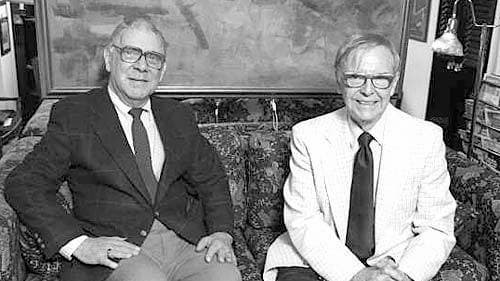 Wright and Forrest later in life

This 1944 operetta was a successful Broadway hit and was the first Broadway show to cross to London after the end of WWII, opening in 1945.

‘Romany Life’ from The Fortune Teller, with lyrics by Harry B. Smith, was one of the songs that was used in the Wright-Forrest work. 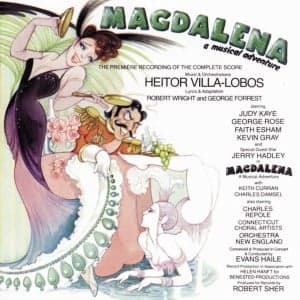 In a shift from their usual method, the duo worked with a living composer, Heitor Villa-Lobos, on Magdalena: A Musical Adventure. The original book was by Frederick Hazlitt Brennan and Homer Curran, and then was given new lyrics and musical adaptations by Wright and Forrest. The New York Times gave it a scathing review, praising only Villa-Lobos’ music. It lasted for 88 performances.

In 1949 came The Great Waltz, which adapted the music of both Johann Strauss Sr and Jr. The original production opened on Broadway in 1934, to a book by Moss Hart and lyrics by Desmond Carter. That, in turn, was based on a pasticcio (an unauthorized adaptation of the music of one or more composers) by Erich Wolfgang Korngold and Julius Bittner called Walzer aus Wien, first performed in Vienna in 1930. In 1949, Wright and Forrest were asked to make their own adaptation for the Los Angeles Civic Light Opera. This never opened on Broadway but went to London in 1970.

Finally, in 1953 came Wright and Forrest’s great hit: Kismet. This used the music of Alexander Borodin to create songs that entered the pop music world, including ‘Stranger in Paradise’, ‘Baubles, Bangles and Beads’, and ‘This is my Beloved’. 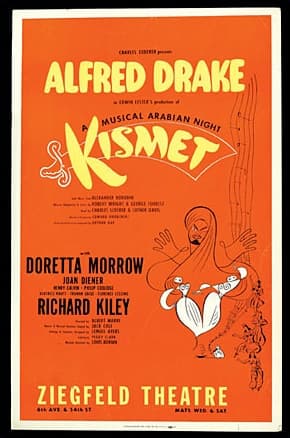 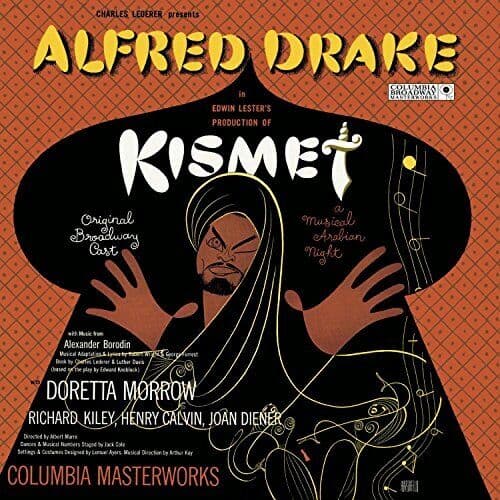 Borodin’s String Quartet No. 2 was used for two different songs.


The women’s dance scene from Act II of Prince Igor, the Polovtsian Dances, was the basis for no fewer than 5 different pieces, the most famous of which was Stranger in Paradise, based on the ‘Gliding dance of the Maidens’ from the dance sequence.


As testament to the popularity of Stranger in Paradise was that in 1955, no fewer than 5 versions made it to the UK pop charts, including versions by Tony Bennett (No. 1), The Four Aces (No. 6), Tony Martin (No. 6), Bing Crosby (No. 17), Don Cornell (No. 19), and an instrumental version by Eddie Calvert (No. 14). It also charted in France as Étranger au paradis that same year. Since then, versions have been recorded by everyone from Engelbert Humperdinck to Sun Ra. Neil Young has performed it live but has never recorded it.

Wright and Forrest’s last adaptation-musical was the music for Anya in 1965, adapting the music of Sergei Rachmaninoff. It closed while in previews when the critics denounced it as being too old-fashioned. It was a musical adaptation of the story of Anastasia, said to be the only surviving daughter of Emperor Nicholas II of Russia. The show was reworked many times, A Song for Anastasia (1967), The Anastasia Game (1989 and 1990), The Anastasia Affaire (1992), and Anastasia, the Musical (1998), but was never the international success that Kismet had been. 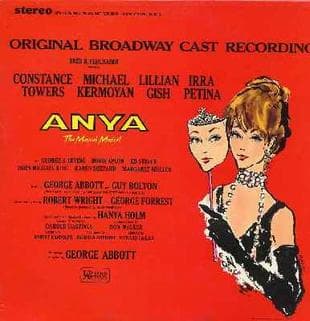 These shows are a testament to how differently classical music was heard in the early 20th century. We can see from various Warner Brother cartoons that classical music by Beethoven, Brahms, Chopin, Liszt, Rossini, Schumann, Smetana, Strauss II, and Wagner were all thought to be appropriate for cartoon usage as being known to the public. Wright and Forrest took their own knowledge of the by-ways of classical music and re-presented them with words and situations that perfectly caught the public’s taste in the case of Kismet.