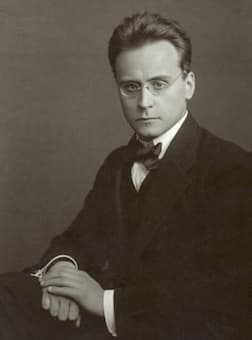 Anton Webern (1883-1945) is best known to us as part of the Second Viennese School with his teacher Arnold Schoenberg and fellow-student Alban Berg. Before he was a radical atonal composer, however, he was a nice Romantic composer whose idol was Wagner. Webern was born the year Wagner died and his graduation gift from gymnasium (high school) in 1902 from his father was a trip to Bayreuth where he saw and was overwhelmed by Parsifal.

Webern moved to Vienna in 1903 and there was struck by Richard Strauss’ works such as the tone poems Aus Italien (1887) and Tod und Verklärung (1890). These late Romantic works brought Webern out of his Wagnerian world and into the modern Romanticism. 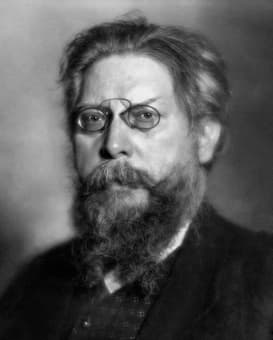 He started his work Im Sommerwind in 1904, when he was at his family’s country estate in Carinthia. He had been reading a poem by the novelist and philosopher Bruno Wille about the joys of a summer day. The poem was in Wille’s lyrical novel Offenbarungen des Wacholderbaums; roman eines allsehers (The Revelations of the Juniper Tree: The Novel of One who Sees All), published in 1901. Webern owned a copy of the second edition from 1903.

Book 6, Erkenne dich selbst (Know Thyself), starts with the poem describing a forest and the summer wind moving through the ferns and the pine tree, a resinous scent in the air, with the blackberry tendrils everywhere. The poem ends with a question “Do you know, pensive soul, what makes you happy?” and answers it with “Infinite Rest.” The poem as a whole is a paen to country life, with the wind bringing sounds and scents of summer. The wind roats and whispers, and ‘Frau Sonne,’ Madame Sun, appears and vanishes behind her clothes of clouds.

The work was Webern’s first full orchestral work, started when he was 19, although he had started composing 5 years earlier. The work is lush and full of pictorial effects that complement Wille’s poem. The end of the idyll, answering the poem’s call for “infinite rest,” has its final dynamic marking as “bis zu gänzlicher Unhörbarkeit” (Down to total inaudibility). And this is one of the innovations of the work – it uses sound as much as silence to bring forth the idea of the summer, the forest, and the invisible wind that moves though.


Webern never heard a performance of the work but would bring the score out to show his students how far he had come as a composer. For us, though, we can match it with Schoenberg’s equally Romantic, but more unsettling work from 5 years earlier, his string sextet Verklärte Nacht, Op. 4. Romantic but with a new vocabulary. Im Sommerwind gives us a more rounded picture of Webern, more than the later works we know him for.