Nineteen Movements for Unaccompanied Cello is a fascinating program-length collection that explore the vast expressive capabilities of the cello, while at the same time forming a powerful and cohesive narrative arc. It was commissioned by cellist Arlen Hlusko with support from the Tarisio Trust. 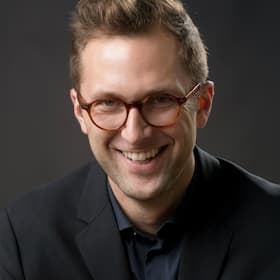 JH: Scott, tell us how your piece came about.

SO: Arlen approached me about writing for her. I conceived of the work as a kind of theater in music, a piece in which simple, human characters are introduced, developed, and transformed in the course of an evening.

AH: This was my first commission, my first time working closely with a composer, and my opportunity to explore the possibilities of creating together what we wanted to share with the world through the cello. I think the piece fuses aspects of both of our personalities, our values, our musical styles, and draws heavily from nature.

JH: Most people can’t imagine a collaborative process like this. Scott did you take notes? Arlen did you experiment on the cello?

SO: Normally when a commission comes about you are briefed about what the organization or musician wants, and then perhaps you’ll have a meeting. Subsequently you have to meet a deadline and you hand it in. You may have the opportunity to fix any glaring errors but most of the creativity occurs by yourself. In the case of Nineteen, I’d write a movement or two and Arlen and I would meet the next day. I would play it on the piano to indicate tempo and the general mood of the movement and then Arlen would play what I wrote approaching the movement with more cello-specific questions like timbre, or with questions like: should this movement be pizzicato or arco? Or she might have asked, “what if we tried another technique?” One of the movements is almost entirely col legno that is hitting the strings with the stick of the bow so there’s a percussive effect. Everything was on the table. As a result, many measures of the pieces are from Arlen’s ideas. The trading of concepts is why I love this piece so much. It’s much more collaborative than anything I’ve ever done.

AH: We worked very closely at Curtis. In the early days, we had a lot of brainstorming sessions and spent time getting to know each other. We discovered we’re both heavily rooted in nature, which became a main thread of the piece. An adventurous way of working we can’t do very often. Scott would sketch out ideas, and I would experiment to find different sounds and colours on the cello—a process of exploration and discovery. Scott drew inspiration from some of the great solo cello repertoire: Bach’s 3rd Suite for Solo Cello, and Britten’s 1st Solo Suite. You can hear influences from both of those pieces if you’re listening for them! I found myself exploring how one might capture the feeling of warm sunshine hitting one’s face. How we might simulate waves of the ocean crashing along the coast. Most of all we hoped to create a landscape or journey that was meaningful and sounded good. How fortunate we had the luxury of being in the same place and of taking as long as we needed! 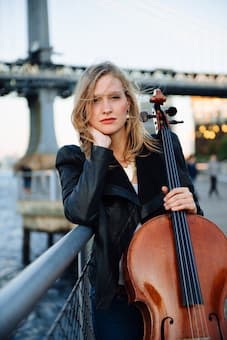 JH: I love the col legno movement. Later in the piece there is a plaintive adagio that you play non-vibrato and a movement featuring harmonics, which really feature all the capabilities of the cello! I read that the structure of the piece is a palindrome. Can you explain?

SO: With every piece, I try to come up with a structure that is clear and simple. A palindrome is a word, phrase, or sequence which reads the same backward as forward. I experimented with the idea of twins, which of course are closely related to each other, so many of the movements in my piece correspond to a “twin” later in the work in which fundamental musical ideas are reimagined and recast. In some instances, the transformation is significant; in others, material is repeated verbatim to create unmistakable narrative connections. For example, the 1st movement and the last are closely related but one is pizzicato and the other is arco (with the bow.) Movement 9 and 11 surround the pivot point of the piece, movement 10—the longest, most dramatic movement, and the center of the work. Movement 9 begins softly and grows to something impassioned whereas movement 11 starts with the same musical premise but stays soft and interior. Audience members don’t necessarily perceive this structure, but as you get more familiar with the piece, the second half is a different type of journey. I’d compare it to the archetypal journey of going into the forest and then coming back out. Everything has a different dimension on the way out.

JH: I found movement 10 mesmerizing and it would be a terrific single movement to have on a cello recital. The recording took place over two full days but months apart. How was that artistically?

AH: I think we still had a sense of the whole. Yes, there were several months between the two sessions for many logistical reasons one cannot control such as getting the hall—the recording took place in MGSA Rutgers’ main concert hall—and lining up the recording engineers to name two variables. But we have such a deep, personal connection to the piece, and what it should communicate, it was easy to pick up where we left off.

JH: Nineteen is about 50 minutes long. Do you have a set of selections that you recommend if someone isn’t able to program the entire piece?

SO: I do. The 10th movement is the longest, and I think it can stand alone nicely as an 8-minute single movement. I’ve also suggested a group of 3 movements and a group of 5 or 7, but I’m happy for a cellist to come up with their own sampler. One of my great dreams for this piece is that it would sit alongside the Bach Solo Suite No. 3 and/or the Britten Solo Suite No. 1, and cellists might play them in their own home for their own enjoyment.

Scott Ordway: Nineteen Movements for Unaccompanied Cello – No.7 and 8

JH: Arlen you programmed all three major solo works in one concert—a huge undertaking for the cellist as well as the audience. How did that feel?

AH: It was over two hours and I must admit, exhausting! When I was artist-in-residence at Rutgers University (where Scott is on faculty), in February 2019, I was able to present all 3 works—Bach, Britten, and Ordway. Before the performance we both spoke to the audience and pointed out what the audience members could listen for as they heard these pieces next to each other. Scott was so thoughtful in writing this piece and he does quote both the Bach and the Britten works in creative ways. Juxtaposing all three pieces was very illuminating for the listeners.

SO: Nineteen Movements for Cello Solo was the only piece on the program at the premier held February 3rd, 2018. The concert took place at a Quaker meeting house in Philadelphia, which has a notable square seating plan so the audience faced inward from three directions and they were very close to Arlen—ideal for the delicate sensibility of the piece.

JH: Several of your other works are also quite long. On an orchestral program, your pieces would take up the lion’s share of a program. Does this give you pause?

SO: I’ve thought a lot about it. I think it’s more difficult for the audience, especially someone new to classical music, to instantly grasp several pieces that aren’t connected in any way. Whereas one piece by a living composer, which has a story, is a lot easier to digest. One of my longest pieces The Clearing in the Forest is a 2-hour theatrical work for chamber ensemble where the musicians double as silent actors and convey themes of migration and refuge. It’s a staged work and is performed around a set made of botanical materials—evergreen, alpine, tropical. It’s a story and not about me. If you connect to the themes of migration and refuge, if you have a connection to human movement and landscape, it’s a piece for you. Then you can tweet about it, take photos of it, and market it in ways that have nothing to do with me and my musical language specifically.

JH: Tell us about your residency in Hong Kong.

The Intimacy of Creativity – 5 Year Retrospective (Hong Kong Philharmonic, Bright Sheng)
Scott Ordway: Let There Be Not Darkness But Light


SO: Bright Sheng invited me to his festival the Intimacy of Creativity in 2015 and then invited me back in 2016 when they did a five-year retrospective. My first recording was with the chamber players of the Hong Kong Philharmonic—an incredible experience—and I was blown away by the city and the people.

And after speaking with these two artists, I’m blown away by their innovative approaches as we emerge from the pandemic and explore new ways of making music and reaching audiences.