Quizzes
We’ll Be Impressed if You Can Guess the Composers of These Works!
Perfect for Smaller Ensembles
by Janet Horvath November 14th, 2020 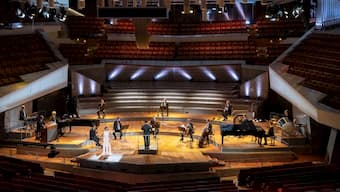 The music world has been drastically affected by the Covid pandemic, and orchestras are gingerly exploring options so as to return to performing live for audiences as soon as we can. The way forward seems to be socially distancing both the attendees and the performers, and performing works with smaller forces.

Any of Mozart or Haydn’s symphonies and other works from the classical era of music is certainly repertoire that might be played. But I’d like to challenge you with 5 pieces that are from the 20th century for reduced numbers of musicians and lend themselves to distancing. Can you guess the composers?

Our first composer, captivated by a 16th Century composer’s hymn, borrowed the melody and wrote this stunning piece, thereby linking composers 400 years apart. It is written for strings divided into three parts—orchestra I, a larger group of strings; orchestra II, nine players placed at a distance from the first, and a string quartet. The two orchestras echo each other, thus transporting us in space as well as time. Weaving folk song and hymnal music creates a mystical, lush, and hauntingly beautiful sound. Who do you think wrote this marvelous piece? 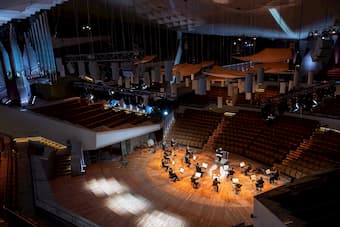 It’s logical to resort to the many pieces of music solely for strings, but here is a work for flute, clarinet (doubling on bass clarinet), oboe (doubling on English horn), percussion, two pianos, string quintet, and voice. The piece was transcribed for 12 players so it could be performed for the Society for Private Musical Performance established by Arnold Schoenberg in Vienna. Schoenberg’s intention was to present and promote contemporary music for sophisticated subscribers, but with his limited budget, he could only afford concerts featuring chamber orchestras. Like most of this composer’s works, the original is for a massive symphony orchestra. Lest you be offended, transcribing masterpieces for instruments other than what they were originally written for, has a long history. Bach wrote many transcriptions as did Ravel, who transcribed Modest Mussorgsky’s piano set Pictures at an Exhibition for orchestra. Franz Liszt arranged as many as 376 works, even music by Wagner, for solo piano. This 12-player rendition has all the music of the original, rewritten without bassoons and brass, but is still satisfying! Stumped?

Another work with unique instrumentation, which lends itself to today’s performance challenges is considered one of this composer’s greatest masterpieces. Written for strings, percussion and keyboards, the composer actually drew a diagram into the score to specify the seating—two string orchestras on opposite sides of the stage, and in the middle but further back on the stage, xylophone, snare drum, cymbals, tam-tam, bass drum, timpani, piano and celeste. A distinctive antiphonal effect is achieved as the sounds bounce across the stage. Best known for his Concerto for Orchestra, this music is also both primeval and refined, tranquil and chilling, and uses compositional styles such as fugues, folk music, and driving rhythms.

Let’s skip to one of my favorite pieces, which is quite delightful and wonderful to play. (His Romeo and Juliet is truly another of my favorites.) Scored for a bit larger group than the previous works mentioned, it includes pairs of woodwinds: flutes, oboes, clarinets, bassoons, and two horns, and two trumpets, timpani and strings. Concise, with impish humor, and virtuosic writing for all the musicians, the work is infused with modern-day bold harmonies. The composer explained, “It seemed to me that if Haydn had lived into this era, he would have kept his own style while absorbing things from what was new in music.” This work is particularly sunny and joyful with charming melodies. Any guesses?

Branching out a bit, is a work with truly atypical instrumentation, in eleven short movements, for violin, double bass, clarinet, bassoon, cornet or trumpet, trombone, percussion, and three actors, one of which is the narrator. Despite the small forces, this piece is usually done with a conductor due to the ever-changing time signatures. It might seem right that a composer who wrote ballet scores also wrote this theater piece. The story is a longstanding one—what happens when we sell our souls to the devil? Easy to keep one’s distance in this piece by—name the composer if you can.

1. Ralph Vaughan Williams: Fantasia on a Theme by Thomas Tallis

5. Igor Stravinsky: L’Histoire du Soldat (A Soldier’s Tale)
I. The Soldier’s March
VI. 3 Dances: No. 1. Tango and
VII. Dance of the Devil