In Tune Society
Truck Concerts, Drive-in Concerts: Creativity and Innovation in the Time of Covid
by Janet Horvath December 5th, 2020 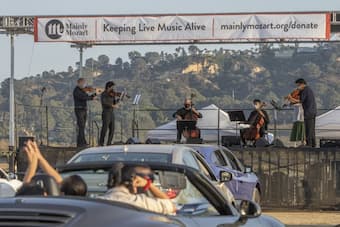 Symphony orchestras perform some of the greatest music ever created by mankind. Nonetheless, negative labels have been hurled at these bastions of classical music, accusations such as—they’re like an albatross, slow to embrace change; they uphold antiquated traditions and formats; they stubbornly maintain styles, repertoire, and music of dead people; they perform in locations out of reach of many members of the community. The devastating effects of the Coronavirus on the performing arts has necessitated a great deal of brain-storming. Creativity and innovation have been the result.

Several orchestras have tried drive-in concerts. The Mainly Mozart Festival based in San Diego, has for thirty years gathered concertmasters and principal players from orchestras all over the United States for a summer of music-making. This year, they held drive-in concerts at the Del Mar Fairgrounds and cars pulled into the massive lot parking distanced from one another. 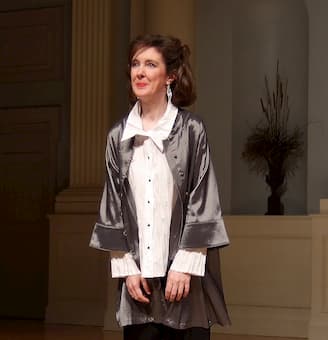 The programmes, conducted by music director Michael Francis had the performers and servers wearing masks. The music of Salieri, Mendelssohn, and Jazz Legends could be heard and some of the most beloved compositions: Beethoven’s Emperor Concerto, and Mozart performed by pianist Anne-Marie McDermott, Mozart’s’ Sinfonia Concertante performed by Los Angeles Philharmonic Concertmaster Martin Chalifour and New York Philharmonic principal viola Cynthia Phelps, and presentations of both Vivaldi’s Four Seasons and Piazzolla’s Four Seasons of Buenos Aires. McDermott has unearthed versions of several piano concertos that were written not only accompanied by full orchestra but also by a string quartet. This too is a great option for our times.

Free concerts with audiences in boats have also been popular. Small groups have performed on local lakes to entertain quarantined audiences and on larger bodies of water. A boat-in concert at Lake Windermere, British Columbia, Canada drew 3,000 people on their canoes, kayaks, motor boats, and even inner tubes, to hear Country singer Brett Kissel play his “dock-side” set. Amsterdam attracted a throng of boats on the Prinsengracht Canal for a free summer festival of classical music.

Professional orchestras have initiated special partnerships. The Toronto Symphony has recently commenced associations with the YMCA, the Art Gallery of Ontario (AGO) and theater groups. Toronto Symphony members are seen throughout the city playing in small groups in a massive hallway at the art gallery where the gorgeous sounds permeate the entire building. They’ve also played a new kind of water music—on the edge of the currently empty swimming pool, with the goal of reaching more communities of color. The YWCA’s forte has been implementing programs of inclusivity.

One of the TSO’s most exciting upcoming ventures is a reimagining of Handel’s Messiah—a 70-minute performance entitled Messiah/Complex. A daring collaboration with Against the Grain Theatre, and the Indigenous Arts at Banff Centre for the Arts and Creativity, filmed with Canadian panoramas in the background, the interpretation will feature a diverse cast singing in Arabic, Dene, English, French, Inuktitut, and Southern Tutchone languages, and the Toronto Symphony musicians. The virtual performance will be available free of charge December 13, 2020 – December 26, 2020 online.

Toronto Mendelssohn Choir recording their performance of “Hallelujah” for Messiah/Complex in Toronto, ON. Yes, those are clear shower curtains – safety first! November 2nd, 2020. 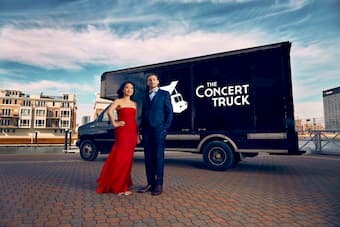 The Concert Truck, one of the most innovative ideas I’ve heard, was actually launched pre-Covid. The idea originated in 2016 with concert pianists Nick Luby and Susan Zhang who believe in the power of music and the need to foster more inclusivity. Both prize-winning performing artists, they had a 16-foot truck retrofit, converted into a mobile concert hall, complete with a piano, a sound system, and stage lights. They’ve presented concerts across the country in parks, playgrounds, at schools, and on city streets—wherever trucks can be parked. Their collaborations include with Kennedy Center’s Washington National Opera, University of South Carolina, Four Seasons Chamber Music Festival, and Charm City Night Market (a celebration of Baltimore’s pan-Asian community) and they have embarked on several residencies which include workshops and community events. Luby and Zhang have been featured on radio and television, and have received awards for creativity and innovation in music. 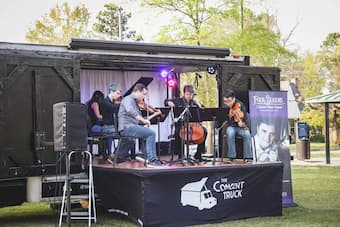 Since orchestras can’t have audiences come to their concert halls right now, the Dallas Symphony will haul concerts to their audiences. This month, from November 21, 2020, they’re beginning what I think is a brilliant partnership. The Concert Truck and the musicians of the DSO will team up with local arts organizations and artists to present concerts across the city. The one-hour concerts in the truck, which can accommodate 5-6 musicians, will be free and held at schools, gardens, hospitals, and church parking lots. Listen to the artists speak about their experiences. Live music reaches more people and brings them together, but it can also enhance the artists’ skills as they adjust to the circumstances, which improves their concentration despite the distractions that can happen outdoors, and cultivates their communication skills when they address the audience.

Despite the huge costs of lives and livelihoods lost in this pandemic, good has been fostered. Artists are redefining the concert experience, making music more accessible, supporting communities, and strengthening arts groups across genres by their unique collaborative approaches. Our survival depends on it.