During the opening measures of the famous chorus, members of the audience glanced around anxiously, checking to see who would be first to rise to their feet. Then someone in the balcony stood, and someone else, and suddenly the whole audience rose to its feet, as is traditional for the ‘Hallelujah’ Chorus.

The reasons for this tradition are somewhat apocryphal: one version is that at the first London performance in 1743, the audience “together with the King”, were so moved by the ‘Hallelujah’ Chorus that they spontaneously rose to their feet. An alternative explanation is that King George II was so tone-deaf that he thought the performance had finished, and the orchestra was playing the National Anthem: once the King stood, everyone present was obliged to stand too. Whatever the reason, there is something really special about standing for such an uplifting and triumphant piece of music. 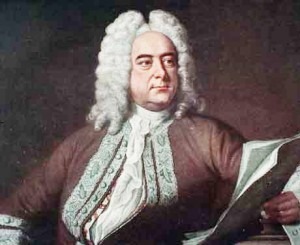 For me ‘Messiah’ will forever be associated with the beginning of the Christmas season. When I was at school, it formed an integral part of the concert which ended the Autumn term, along with the service of nine lessons and carols at the church next door to my school. I must have sung Handel’s ‘Messiah’ at least 10 times, for the tradition of performing it at Christmas continued when I joined my university choir.

‘Messiah’ was composed in 1741, with a text compiled by Charles Jennens from the King James Bible and the version of the Psalms included with the Book of Common Prayer. It was first performed in Dublin on 13 April 1742 and received its London premiere nearly a year later. Initially it received a modest public reception, despite Handel’s established reputation in England, where he had lived since 1712, but gradually the oratorio gained in popularity and it is now one of the best-known, much-loved and most frequently performed choral works in Western music.

Handel: Messiah, HWV 56
The work is organised in three sections: Part 1 tells the story of the birth of Christ and includes all the familiar elements of the Christmas story. Part 2 is concerned with Christ’s passion and death, his resurrection and ascension, and ends with the joyous ‘Hallelujah’ chorus. It is this aspect of the work which makes it just as applicable for performance at Easter as well as at Christmas (in fact, its premiere in Dublin took place 19 days after Easter 1742). Part 3 returns to the theme of resurrection and represents the real core of the work as Christ’s resurrection is connected to our own redemption and sense of hope, beautifully affirmed in one of the work’s most famous arias, ‘I Know that My Redeemer Liveth’. And I suppose the best thing about ‘Messiah’ really is all the memorable ‘tunes’ – from ‘Ev’ry Valley Shall be Exalted’ to ‘The Trumpet Shall Sound’, ‘I Know My Redeemer Liveth’ to the charming duet between tenor and alto ‘O Death Where is Thy Sting’. Then there are the choruses: ‘And the Glory of the Lord’, ‘All We Like Sheep’, ‘For Unto Us a Child is Born, ‘Hallelujah’, and the wonderful fugue of the final chorus. In between all this are some beautiful solos, recitatives, which serve to move the narrative forward, and delightful orchestral interludes. Handel brings the text to life with light and shade, storms and sunshine, fugue and counterpoint, and a huge variety of textures and “word painting”, the technique of having the melody mimic the literal meaning of the libretto. Because of the skilful way in which Handel organises the material, and the universal, redemptive message of the text, Messiah remains a work which is uplifting and life-affirming, regardless of how it is performed.