Wolfgang writes to his father from Paris on 5 April 1778. “I MUST now explain more, clearly what mamma alludes to, as she has written rather obscurely. Capellmeister Holzbauer has sent a “Miserere” here, but as the choruses at Mannheim are weak and poor, whereas here they are strong and good, his choruses would make no effect. The Director of the Concert Spirituel requested me therefore to compose others, with Holzbauer’s introductory chorus being retained… I have added a short recitative with hautboy and bassoon, for here recitative is much liked. I must say that I am right glad to have done with this task, for it is really detestable not to be able to write at home, and to be hurried into the bargain; but now, God be praised! It is finished, and I hope it will make some effect. M. Gussec, whom you no doubt know, when he saw my first chorus, said to Le Gros that it was charming, and could not fail to be successful, that the words were so well arranged, and, above all, admirably set to music.” 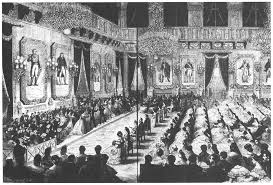 Mozart and his mother had arrived in Paris, and he quickly wrote compositions for the Concert Spirituel, and for the theatre. Regrettably, none of the substitute music for Holzbauer’s “Miserere” mentioned above has survived. His mother writes to her husband, “I cannot describe to you how much Wolfgang is beloved and praised here.” They had rented a very small apartment, so Mozart composed at the Director Le Gros’ house. And it was Le Gros who asked for a work expressly designed for four of the leading wind players of the time. Mozart continues:

“Gros is a kind friend of mine, but very reserved. I am not merely to write an act for an opera, but an entire one in two acts. The poet has already completed the first act. The ballet master Noverre, with whom I dine as often as I please, managed this, and indeed suggested the idea. I think it is to be called “Alexander and Roxana.” Madame Jenome is also here. I am about to compose a sinfonie concertante; flute, Wendling; oboe, Ramm; French horn, Punto; and bassoon, Ritter. Punto plays splendidly.”