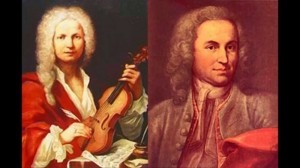 Vivaldi and Bach never met! While the Italian master led the life of an international jetsetter, racing from one lucrative appointment to the next, Bach never strayed far away from home. Although Vivaldi came in contact with a variety of national musical styles, his music was little affected by his travels. On the other hand, Bach was content to live and work in his native community, and never ventured beyond North-German borders. This self-imposed isolation meant that Bach had to patiently wait until a particular repertory or musical style, originating in different European regions, became available at his place of work. When Bach moved to Weimar in 1708 to take up the position of organist at the court of Duke Wilhelm Ernst, everything was abuzz with the music of Antonio Vivaldi. Always an enthusiastic student, and eager to please his employer, Bach went to work and transcribed at least nine concertos of Vivaldi, three for solo organ (BWV 593-4, 596), and six for solo harpsichord (BWV 972-3, 975-6, 978, 980).

The importance of Bach’s confrontation with Vivaldi’s music should not be underestimated. In fact, scholars have suggested that it presented the strongest single development towards Bach’s personal musical style. His musical language acquired its enduring quality and unmistakable identity through the careful blending of Italian mannerisms with complex counterpoint. In simple terms, Bach saw music as an intellectual pursuit, while Vivaldi was primarily concerned with how the music sounded. Counterpoint and all-pervasion motivic relationships in the service of god on one hand, and aural surfaces that conveyed vivid emotionality on the other. However, both men acquired great fame for their mastery of their favorite instruments. Bach was considered an incomparable organist whose improvisations were celebrated beyond German borders. And although Vivaldi was internationally known as a composer, his enduring fame came from being a violin virtuoso. When Bach went to work on the “Vivaldi Transcriptions,” he fully respected the original compositions. Reluctant to introduce any structural alterations, he even literally transferred passages idiomatic to the violin. However, by filling out the parts with small canons, motivic references and rapid bass passages, Bach made sure that his personal musical signature would be instantly recognizable.

While the Vivaldi organ transcriptions are clearly not Bach’s greatest works for keyboard, they give testimony to the composer’s heightened interest in the Italian style. And when he accepted an appointment as Kapellmeister at the court of Anhalt-Cöthen, he finally had the opportunity to put Vivaldi’s influence to practical use. In the Brandenburg Concertos, for example, Bach could have adopted the Corelli model by stringing together a number of short movements of contrasting characters. Instead, he elected to appropriate the compact and symmetrical model, including the idiomatic ritornello scheme practiced by Vivaldi. Take the Violin Concerto in E major BWV 1042 for example, with the ritornello to the opening movement immediately disclosing Vivaldi’s influence. The opening hammer strokes give rise to a clearly defined rhythmic and melodic contour that seamlessly leads into a delightful sequence of harmonic modulations. Retaining the sharp outline of outer parts, the ritornello concludes with a playful and dynamically contrasting cadential section. If ever there was any doubt, the E-major Solo Concerto provides the sounding testament to corroborate the assessment of Johann Nicolas Forkel—Bach’s first biographer—that Vivaldi taught Bach to think musically!