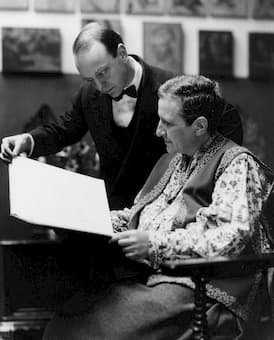 Taking up the genre of musical portraits as had been done by earlier composers such as Couperin, Schumann, Anton Rubinstein and Elgar, American composer Virgil Thomson (1896-1989) began composing his portraits in 1928 and completed his final one 60 years later. In those 147 musical works, he captured an art world that often escaped the regular literature.

As a student in Paris in the 1920s, he saw his many painter friends do quick sketch portraits of their friends and tried to do the same in music. His subjects sat for him and could do anything they wanted: sleep, read, or daydream, but not talk to him as that disturbed his musical thoughts. The next day, he’d return to his sketch and edit it (or dispose of it) as necessary. Some of the portraits are short, less than a minute in length, while the largest, a flute concerto dedicated to his friend Roger Baker, lasts 15 minutes. His subjects included instrumentalists in his circle of friends; muses, such as Dona Maar who was the companion of Pablo Picasso from 1936-1945; writers, such as Jane Bowles; and his composer friends, such as the portrait he did of Aaron Copland in 1942.

The collection 5 Ladies assembles violin and piano portraits he has written between 1930 (Anne Miracle, Alice Toklas, and Mary Reynold), 1940 (Yvonne de Casa Fuerte), and Cynthia Kemper (1982). The pieces had gotten forgotten in Thomson’s files and were only drawn together in the mid-1980s as a collective work. The brief comments about each subject were made by Thomson in the mid-1980s.

The first lady in this collection is Cynthia Kemper, described by Thomson as ‘From Kansas City, Missouri, a mother, a hostess, and something of a grand dame.’ Her piece carries the subtitle of “A Fanfare” and it seems to convey both a hominess and a grandeur that’s very appealing. She was married into the banking and railroading Kemper family, for which the Kemper Museum of Contemporary Art is named.


Anne Miracle, ‘French, beauteous and sweet’ is the second subject and she’s written as a simple work that carries a kind of French beauty in it. 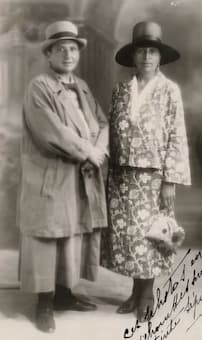 One of the muses he captured in sound was Alice Toklas, companion to the writer Gertrude Stein. Although composed in 1930, this work for violin and piano lay neglected in Thomson’s files until it was resurrected in 1982. Thomson noted this about his subject: ‘Secretary, hostess, and for forty years devoted companion to Gertrude Stein.’

Alice Toklas (1877-1967) was born in San Francisco and moved to Paris in 1907 following the devastating 1906 San Francisco earthquake. She met Gertrude Stein the day after she arrived in Paris and their relationship only ended 39 years later with Stein’s death in 1946. She was Stein’s support as she built her salon in Paris that attracted the best in the arts. She’s best known as the subject of Stein’s 1933 book The Autobiography of Alice B. Toklas. Thomson, who knew both women well, felt the book captured Alice’s style of storytelling and her voice.

Those who knew Alice Toklas and heard this piece found in its wandering and disquieting sound an echo of Alice Toklas’ own style of very amateur piano playing.


The fourth subject is Yvonne de Casa Fuerte, ‘Violinist, Marseillaise by birth, Spanish by marriage, Franco-American by long musical experience.’ In 1921, Yvonne Giraud married Illan Alvarez de Toledo, marquis de Casa Fuerte and in 1931, she founded the Sérénade concert series. She had extensive correspondence with not only Virgil Thomson but also Francis Poulenc and she is the dedicatee of Darius Milhaud’s Third Chamber Symphony, Op. 71. 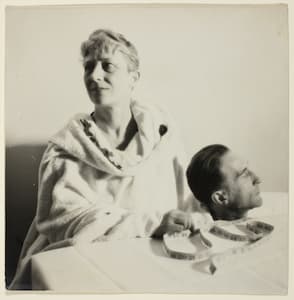 The final friend is Mary Reynolds, ‘From Minneapolis, friend of artists, and a bookbinder, inveterately Parisian. To avoid wartime arrest she walked over the Pyrenees.’ Reynolds was also known for her romantic partnership and artistic collaboration with Marcel Duchamp. As a bookbinder, she was very much in the Surreal tradition and as an artist, she was one of the central figures in the movement. After her escape from France over the Pyrenees, she and Duchamp lived in New York until the end of the war, after which she returned to Paris. She died in Paris of cancer in 1950, with Duchamp at her side.


Few of the names may mean anything to us today, except, perhaps, for Alice B. Toklas. Remembering the people who are important to us becomes more difficult over time and in memorializing these women, Thomson brings them back to life again for us.