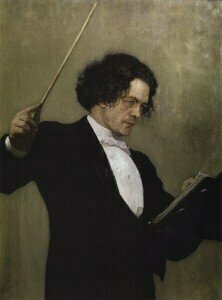 Starting in 1848, Anton Rubinstein was in great shape musically. He had an attentive patron in the Grand Duchess Elena Pavlovna, sister-in-law to Tsar Nicholas I. In addition to his teaching and performing careers, he also composed 3 symphonies, 5 operas, 3 piano concertos, nearly 50 songs, and innumerable works for solo piano. Among those works were the 24 musical portraits, published under the name of Kamennïy-Ostrov. The Kamennïy-Ostrov, ‘Rocky Island,’ of the title, was the palace of the Grand Duchess.

Kamennïy-Ostrov is a collection of 24 musical portraits of people at the Grand Duchess’ court. One writer noted that ‘These genial genre pictures reveal the luxury and refinement of elegant society, but the impressions, thoughts and passions kept in check by good manners retain the glow of the fire which is merely covered with ashes.’

At the same time as he was making these portraits in music, Rubinstein was also making them using the music styles of the popular composers of the period: Mendelssohn, Schumann, and Stephen Heller, Ferdinand Hiller, Joachim Raff, Ignaz Moscheles, John Field, Mikhail Glinka, and others.

Listen, for example, for the traces of Schumann in the 3rd work.

Rubinstein: Kamennïy-Ostrov: III. Con moto (Joseph Banowetz, piano)
The sixth piece seems to take us to the world of Mendelssohn.

VI. Moderato
Into this world of the wealthy, we have a rustic Russian dance.

VIII. Moderato
The most famous work of the entire collection of 24 portraits is No. 22. Later publishers gave it the nickname of “Rêve angélique” (Angelic Dream), complete with an accompanying fairy story: “We are told that this piece pictures the romantic attachment of Rubinstein for a lady of noble birth, probably Mlle Anna de Friedebourg to whom the work is dedicated, and that the music was suggested to him during a walk by the river at sunset. The bell of a neighbouring convent was ringing, the waters were aglow with the setting sun. There Rubinstein walked with his love.” Dreams, indeed! This note appeared on the Ampico piano roll but has never been substantiated.

XXII. Andante
The portraits are flattering, the atmosphere is happy, and in them we can see Rubinstein as a beloved musician, doing the kind of composition he loved best – simple piano works that have so much more than the surface reveals.