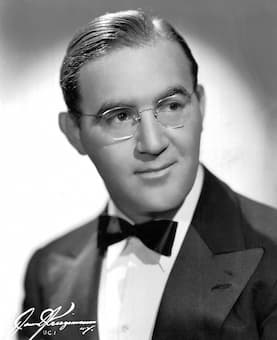 After having made his name in jazz, clarinetist Benny Goodman set out to make his name in classical music, feeling that he was likely to leave a longer impression in classical music than in jazz. To fill that need, he started commissioning works, with the net result being a body of modern music for clarinet that is unmatched. 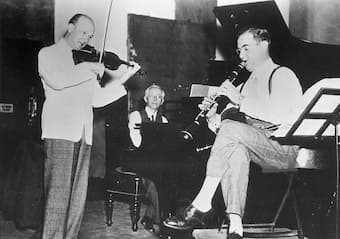 Szigeti, Bartók and Goodman in rehearsal

His first commission was undertaken to help a music who was having financial problems. In 1938, at the instigation of the violinist Jozsef Szigeti, Benny Goodman commissioned Béla Bartók for a double concerto for clarinet and violin. Bartók, Szigeti, and Goodman made their premiere at Carnegie Hall in January 1939 with a work entitled Rhapsodies for Clarinet and Violin: Verbunkos and Sebes. The trio recorded the work in 1940 after Bartók had written a new middle movement. It had a new title: Contrasts, based on Bartók’s feeling that the trio did not employ instruments that had sonorities that would easily blend. Through the work, the violin and clarinet trade fragments of melodies, with one instrument supplying a rhapsodic accompaniment to the other. 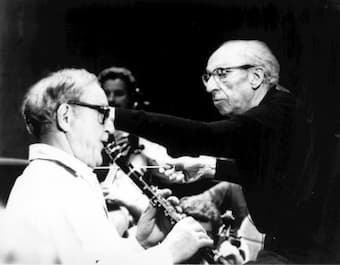 With that start, Goodman continued to meet composers and commission works. Sometimes it worked and sometimes it didn’t: his commission of a clarinet concerto from Benjamin Britten in 1942. Only the first movement was completed and it was filled out and orchestrated much later by Colin Matthews, being published under the title of Movements for a Clarinet Concerto only in 2008. The composer Ingolf Dahl started a double concerto for Goodman and seems to have nearly completed it, but the work has vanished. A concerto was commissioned from William Walton but nothing is known about it.


Prelude, Fugue, and Riffs by Leonard Bernstein (1949) had been written for the band leader Woody Herman but he was between bands at the time and Goodman played the premiere, gradually being identified with the work. 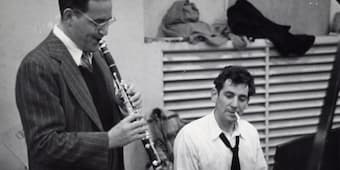 Bernstein and Goodman in rehearsal, 1951

Composers were faced with a quandary in their writing – do they do something that’s purely classical or do they consider including anything from Goodman’s jazz side in their writing? For Morton Gould in Derivations for Clarinet and Band, the jazz side pulled strongly, resulting in a final movement that, as the composer says, is ‘…meant to go like a shot. Its accumulating barrage of jazz-oriented ostinatos and motifs attempts to give the drive and feel of jazz improvisation.’ 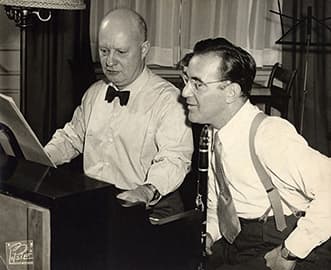 The fact that he commissioned a work did not guarantee that he would play it. He pushed Darius Milhaud for a clarinet concerto and exclusive performing rights for 3 years, but in the end never performed or recorded the work. It was given its first performance in 1946 by clarinetist Richard Joiner with the Marine Band at the Marine barracks in Washington, D.C.

Hindemith and Goodman started meeting in 1941 but because of the war, Goodman suspended all activities, including commissioning German composers until much later. It wasn’t until 1947 that the commission discussions were renewed. The first performance didn’t go well and Goodman didn’t play the work again until 1955, where critics said they would have liked the work better if Goodman had been free to improvise that than tie himself to the work. In the end, however, perception of the work has changed to recognize its value.


Of all the work that Goodman commissioned, three works stand out: Bartók’s Contrasts, Copland’s Concerto, and Hindemith’s Concerto. All are significant contributions to the clarinet literature and to the music of the 20th century.