The world of opera is a world of fantasy – people fall in love just by hearing the other person, all rumours are instantly believed, and miscommunication rules. 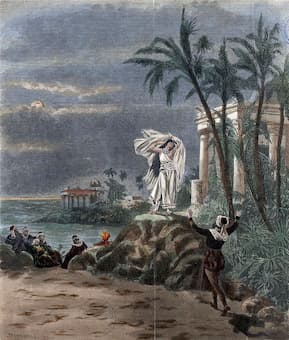 Detail from the final scene of act 1 (duet of Leïla and Nadir)
in the opera Les pêcheurs de perles, as produced at La Scala
on 20 March 1886, the Milan premiere

Bizet’s Les pêcheurs de perles (The Pearl Fisher) begins with the renewed friendship of two old buddies who had divided over a woman and ends with a funeral pyre where that same woman, now a priestess who dared love and the man who loved her are condemned to death. A diversionary fire in the fishermen’s camp enables our hero and heroine to make their escape. Later versions had more dramatic endings with the hero dying after being stabbed or dying on the funeral pyre. Each element adds to the dislocation of the story from that of its audience. Funeral pyres and priestesses were the least of it.

The setting of the opera is Ceylon (now Sri Lanka), apparently a random last-minute change from its first setting, Mexico. Hot weather, minimal clothing, and we have this final scene for the La Scala premiere in 1886. The heavy jewelry, the transparent body covering, the exposed shoulder, and the unbound hair all speak to a world that isn’t that of Paris, let alone the setting with palm trees, the foliage, and the temple.

The great duet from the opera isn’t that between the lovers, but between two friends, swearing eternal friendship and setting aside that woman from Kandi who drove them apart. Leila, the priestess who has been brought to prey for the fishers’ safety, of course, turns out to be the woman from Kandi and so the whole story is set up.


Bizet was only 25 when he brought out Les pêcheurs de perles and it wasn’t a success. He died 10 years later, only 5 days after the disaster of Carmen (another exotic woman who wasn’t French). Now, Bizet’s mastery is recognized and it’s only our current problems with how to play characters that are exotic other that restrict productions of his work.

Léo Delibes’ Lakmé (1883) is another opera that takes advantage of the orientalist aspects that were currently popular: an exotic location, a fanatical priest, mysterious Hindu rituals, and the juxtaposition of Eastern and Western morals.

Two different songs, one a duet, are the best-known pieces from the opera. In the ‘Flower Duet’, Lakmé, the daughter of a Brahmin priest, and Mallika, her servant, sing as they gather flowers by the river. Each has an introduction and then, under the canopy they sing, each with slightly different words, about their surroundings and their fears for the future.


The delicacy of the duet was unmatched in opera at the time, with most duets bringing together people of different viewpoints or declarations of love, but few with this kind of descriptive music and writing about the beauty of the river and the flowers that surround our singers.

Later in the opera, Lakmé’s father forces her to sing a song that will bring out the man he suspects is her lover. And when the English soldier Gérald appears, he is wounded by Lakmé’s father before being hidden and nursed back to health by Lakmé.


The song is a tour-de-force for coloratura sopranos and has long attracted sopranos to its 8-minute verbal fireworks. Here’s a combination of 10 different sopranos’ versions:

Gérald, the cad, is called back to his soldierly duties by his friend Fréderic and leaves Lakmé who then commits suicide by eating the leaves of a poisonous tree. 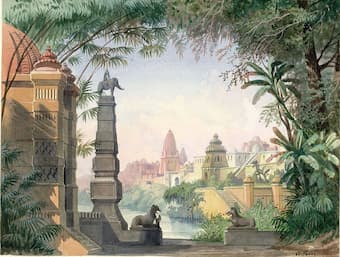 Set design by Augusto Ferri for Act One of the Italian production,
1878 (Archivio Storico Ricordi)

Sitâ, the priestess of the temple of Indra, is found to be in love with an unidentified stranger. Scindia, the king’s minister, is in love with Sitâ and wants to overthrow the king. Forced by her uncle, the high priest of the temple, to lure the stranger out Sitâ sings and the stranger, of course, turns out to be Alim, the king of Lahore.

In a twist to the usual opera story, the hero, Alim, is killed by Scindia at the end of Act II. This lets Act III be set in Paradise where Alim is in a world of beauty but can only sigh for Sitâ.


The god Indra takes pity on him and sends him back to earth, with the caveat that his life is tied to Sitâ’s. If she dies, he dies. He’s reincarnated as a seemingly crazy beggar. On the way to her wedding with Scindia, Sitâ flees to the sanctuary of Indra’s temple and Alim joins her. They are discovered by Scindia. Sitâ kills herself and is reunited with Alim in paradise. 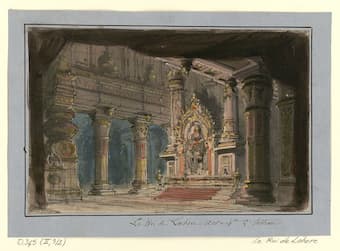 Set design by Philippe Chaperone for the Temple of Indra, Act V, 1877

This is French Grand Opera at its not-so-grandest, but it was the opera that established Massenet’s name. It was an immediate hit and after 2 years on the stage in Paris, traveled to the rest of Europe and to South America.

Rodney Milnes summarized the ‘popular operatic preoccupations in 19th-century Paris: an exotic oriental setting, a virgin priestess loved by both tenor and baritone, a thundering bass High Priest, and so on’. Bizet, Delibes, and Massenet each took this charge in a different way, sometimes presenting us with works that exoticize the other and sometimes with works that seem to be normalizing the exotic. Lakmé was in the repertoire of the Opéra-Comique for some 80 years and still has productions done around the world. Le roi de Lahore had an international run, but Les pêcheurs de perles had a hard path. After its initial failure in the press (the audience was enthusiastic) at its opening, it was not played again in Bizet’s lifetime. Its revival 30 years after its premiere has led to its gradual acceptance of the work. It is of note that a performance of the full reconstruction of the work didn’t happen until 2002.