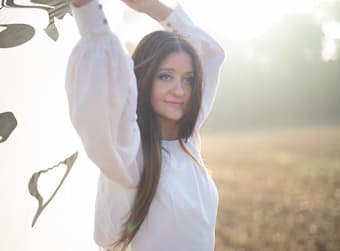 “The act of listening can be transformative. It can introduce a change of perspective, heighten our perception of sound, space, time, spirituality. Our intuitive intelligence knows there is more beyond the images we see, the sounds we perceive. Just sit in silence for a few minutes to begin to recognise this. In this age of overwhelming distraction, we have to be intentional about where we place our attention. Distraction is everywhere – it’s persistent and attractive. The alternative path is powerful, rewarding and lasting, offering the substance and connection we’re likely all searching for.” – Christina McMaster, pianist, wellbeing advocate and founder of Lie Down & Listen

In her Lie Down & Listen concerts, launched in 2018, British pianist Christina McMaster encourages her audience to listen to and engage with music in a different way. The clue is in the title – this is a concert where you are invited to lie down, comfortably and casually on a yoga mat, rather than sitting upright in a concert seat, and enjoy music in an unusually relaxed setting. Using a pioneering combination of music, meditation, Virtual Reality technology and restorative yoga, Lie Down & Listen concerts create a deep sense of relaxation. Inspired by the downtown New York lying down concerts of the 1960’s, the concept blurs the boundaries of performance art, music and healing, creating a truly immersive and experiential sound therapy.

In her new album ‘Inner Landscapes’, Christina McMaster invites you to experience deep listening, to “‘Seek within yourself’ to uncover a deep sense awareness of sound, music and resonance through a sumptuous progression through sound worlds, offering the potentiality to change perspective and perceive what was previously unheard.” (Christina McMaster) 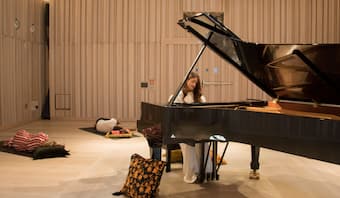 The album contains thirteen tracks of 20th and 21st-century music, mostly minimalist in mood or genre, including works by Philip Glass, Arvo Pärt and John Cage.

The album opens with Meredith Monk’s ‘Ellis Island’, an upbeat, twirling melody which repeats and doubles-back on itself. The piece suggests movement and transition, as it portrays the arrival of Irish immigrants to Ellis Island and the hope of a better life in New York City. The melody has an Irish lilt to it and the overall mood is optimistic. It’s followed by Terry Riley’s Keyboard Study No. 2, another piece seemingly full of energy, yet its repeated figures soon feel more like the mantras used in meditation (Riley himself used this piece as a meditation at the piano).

A sense of stillness comes in Für Alina by Arvo Pärt, and here we are encouraged to listen to the resonances of the notes, the sounds between the sounds, as it were.

Satie’s Gnossienne No. 1 follows, another piece which relies on repetition with a simple treble melody and repetitive bassline, with just the hint of a dance rhythm. It’s deliberately anti-virtuosic: Satie was reacting against the superfluous and excessively extravagant in music, which had become a feature of the high Romantic movement of the latter part of the nineteenth century. The score is littered with enigmatic directions, such as “on the tip of one’s tongue” and “see within oneself”, which is what Christina McMaster is inviting us to do in this section of the album.

In Fratres by Arvo Pärt, she is joined by violinist Lana Trotovsek, in a performance which combines energy and stillness, from the frenetic violin line to the plangent bass notes of the piano. A sense of infinity pervades the end of the piece, taking us into the calming world of Philip Glass’s Etude No. 2.

This is followed by three very slow, simple pieces by Satie and Harrison Birtwhistle, and now we are getting deeper into a place of meditation. By the time we reach Pärt’s Spiegel im Spiegel and Cage’s In A Landscape, we are fully immersed, carried away on these delicate and beautiful sounds. These pieces are followed by Debussy’s Étude Pour les sonoritiés opposes, and finally the spacious, spiritual louange from Messiaen’s Quatuor pour la fin du temps.

McMaster really capitalises on the resonance of the piano, its harmonics, and the “spaces” in between the notes – as much her skill in this repertoire as the instrument and recording process. The result is a much more colourful and involved rendition of these pieces, which I am sure is her intention. You are being asked to listen carefully, and to listen between and beyond what one hears initially in this music. It’s a very interesting exercise and something I believe we should do more of, allowing us to take time out of our busy schedules to fully appreciate what we are hearing.

The accompanying booklet offers listening notes written by Christina McMaster which encourage engaged listening with the music, rather than simply giving a potted overview of each piece and its composer. For the newcomer to classical music, this is very appealing, and also offers an entry point for less familiar or more unusual repertoire.