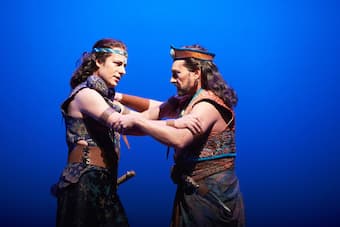 When talking about operas, we mostly focus on arias, those glorious moments where all time stops and the hero or heroine tells us of their hopes and their dreams, or their disappointments and anger. Duets, however, have their own strength. Often, they are between the hero and heroine, or two lovers, or a person of power and a person of little power. Sometimes, however, when the duet is between equals, the result may be as strong as an aria.

In Georges Bizet’s 1863 opera Les pêcheurs de perles (The Pearl Fishers), two friends who have long been separated meet again and pledge their friendship. A long time ago, in Kandy, Ceylon (Sri Lanka), the two had fallen in love with the same woman, a priestess of Brahma. However, recognizing that this competition for her love would destroy their friendship, they both foreswore her to keep their relationship.

Nadir (tenor) and Zurga (baritone) sing of their history and their decision in their Act I duet, “Au fond du temple saint” (“At the back of the holy temple”). The blending of the tenor and baritone voices adds to the depth of feeling. 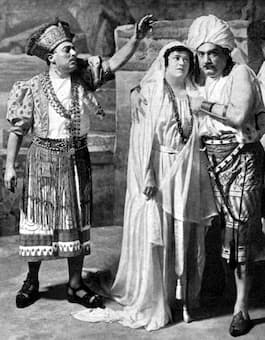 This kind of declaration, of course, causes its own complications in the opera as the priestess, Leila, comes to their village to bless the fishermen in their dangerous work – and Nadir falls in love with her again. Zurga, who has just been elected Fisher King, must uphold the rules that prevent a priestess from sullying herself with Nadir and, in the end, choses to sacrifice himself to ensure their successful escape.

The men’s duet reappears in the final moments end of the opera – now sung in unison by Leila and Nadir – as Zurga bids them adieu. Now the lyrics have changed – instead of the two friends looking back on their decision of years ago, the two lovers are looking at the state of their journey in life together: no more sadness, only happiness ahead.


This change of meaning from a statement of men’s solidarity to a declaration by two lovers permits the listener to appreciate the depth of feeling that Bizet put in the aria at its first iteration and how that shifts through the opera as discoveries deepen our knowledge of the characters.