Guest Posts
In Touch with Richard Stoltzman, guest performer at The Intimacy of Creativity
by Cathy Hung May 27th, 2011 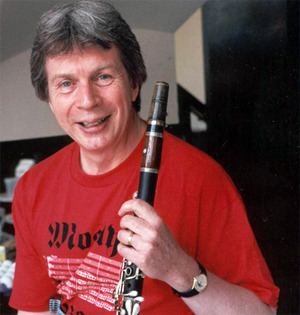 “Usually I don’t like to think that I’m a clarinettist,” stated the Grammy Award-winning clarinet soloist. It may all seem surprising for Richard Stoltzman to have said so. But when you actually hear it, you know there is a profound wisdom within. “Because if I don’t think, I’m free. Just like what I always say to my students, ‘Please, please don’t sound like a clarinet! What’s your voice?’ Having your own voice is very important because people who listen to you don’t care about the correct sound or technique at all- they just want to be touched!” Simple as it may seem, it is perhaps one of the most forgotten basics of the musical world. Indeed Richard had similar enlightenment as he recalls his first performance at the Carneige Hall with Benny Goodman for Eric Copland’s 70th birthday concert- that all his nervousness was swept when Eric Copland came by and pat his shoulder with encouragement, “You should play in a jazzy way! Don’t analyse everything!” Being inspired by great musical minds, Richard would like to give his very best to help younger musicians in turn. “I feel that my part is to help music to exist; to be inspired and then to inspire others.”


Having watched Richard perform on stage, one can feel the artist’s passion on musical performance as natural as an inborn trait. Without any explicit showiness, the soloist focuses on bringing the very best of music in each of his appearance. “I love music; being on stage simply makes everything easier for me. I don’t have to be the centre on stage- I feel I’m very lucky to be able to perform.” It is this modesty and innate enthusiasm that earned Richard the utmost respect.

Aside music, Richard is also a deep meditator of life. All the time he emphasizes the long-lasting spirit of music that can possibly break through the passage of time. As he takes a long pause, his mind searching for the greatest teaching he finds in life, one can feel his respectable seriousness. “I’d say, ‘Nothing lasts forever’. Music exists in time. After a certain piece is finished, music is gone. But the only place where it lasts is in our memory. People remember your music. Of course you and I will die someday- so after you die, those whom you are connected with will remember you,” Richard reveals his long engagement of thought. Indeed, mortals can never resist the passage of time but be remembered through their achievements. How would Richard Stoltzman like himself to be remembered as a clarinet soloist in history? His answer is, “I would rather like my sound to be remembered instead of me as a clarinettist.” Again, music is all about the art of sound.

The Intimacy of Creativity: Richard Stoltzman