Artists Behind the scenes
Behind the Curtain
Glenn Gould Driving Under the Influence of Mahler
by Georg Predota December 17th, 2016
Tags: Mahler 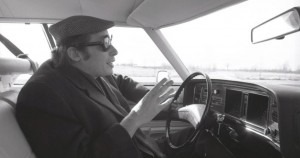 It all started with Hector Berlioz and his Evenings with the Orchestra! A group of bored musicians are stuck in a small town playing overrated operas. With nothing else to do, they tell tales, read stories and exchange gossip about the world of music and musicians. And that’s the idea “Behind the Curtain!” In short, humorous and entertaining tales, we’ll discover the “human side” of famous composers and performers!

When it came to bizarre routines, petulant attitudes and obsessive personality traits, no rock star could hold a candle to Canadian pianist Glenn Gould. As we all know, the eccentric and reclusive genius left a fascinating legacy of recordings ranging from brilliant Bach, to his willfully idiotic Mozart and tortuous Beethoven. He steadfastly refused to play Chopin, Schumann, Liszt and Debussy deriding their compositions as empty theatrical gestures, and insisted that Orlando Gibbons was the greatest composer of all time! This peculiar keyboard wizard was rumored to be one of history’s worst drivers.

One evening he was speeding his Lincoln Continental through the Canadian countryside, waving his arms wildly inside the car. When a policeman pulled him over, Gould told him that he was driving under the influence of a Mahler symphony that had so consumed him that he was conducting it with both hands as he drove. But his odd behavior did not stop there. Throughout his performing career, he sat on the famous low chair his father had built, and after the original padding had worn away, it became a medieval torture device with a single narrow beam running down the middle back to front. And I am sure you have seen his mouth and face contorted in constant expressive motion! Gould spent most of his time in a dreary suburban hotel because it offered 24-hour room service and he wore heavy sweaters, scarves, gloves and overcoats during the hottest months of the year. Always in “horror of catching colds,” he was terrified of germs and even refused to go to the hospital to visit his dying mother. In later years he became addicted to antidepressants and anxiety-suppressing medication that undoubtedly hastened his early demise. Gould had a natural sense of the dramatic, and he got a lot of mileage out of being a mad artist. And while pop culture elements fueled his almost mystical fame, he was a phenomenally gifted, yet fragile and fearful man who was only at ease when making music.