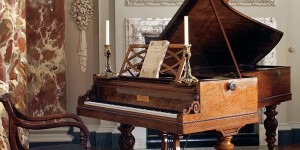 Chopin’s ‘own’ grand piano at the Cobbe Collection
Credit: http://www.cobbecollection.co.uk/

Some years ago I heard two performances of Chopin’s Piano Sonata No. 3 in the same day: the first was on an 1848 Pleyel from the Cobbe Collection at Hatchlands, UK, a piano said to have been used by Chopin when he visited England in 1848. The second was at the Royal Festival Hall on a modern concert Steinway model D. It was almost as if I’d heard two completely different pieces of music. If I had to pick one performance, I would probably say I enjoyed the concert at Hatchlands more – the setting which harked back to Chopin’s Parisian salon and the culture of concerts amongst friends, and the more limited dynamic range of the instrument (without loss of pianistic colour), which seemed appropriate for the music. The performance on the modern Steinway seemed more seamless, the sound somehow “smoothed out”.

Pianos are now bigger and louder than ever: the invention of the iron frame in the 1820s and the introduction of steel wire strings allowed manufacturers to create much stronger and therefore bigger and noisier pianos. Designed to project in the biggest venues, the largest grand pianos are now over 3 metres in length (the standard Steinway Model D – still the most popular piano in modern concert halls – is 2.74 metres) and modern manufacturing techniques and materials give these instruments immense power. In addition, contemporary taste and trends, in part driven by the wide availability of very high-quality recordings, mean that modern pianos are often voiced in such a way that the sound is very bright, particularly in the upper register.

I have been lucky enough to play Schubert and Chopin-era fortepianos and pianos (including the aforementioned 1848 Pleyel), an instructive experience for it tells one a great deal about the possibilities – and limitations – afforded by the instruments of the day and the kind of soundworld these composers might have known. I’m no period instrument crusader, but I do think it is important to understand that an 1826 Graf fortepiano, such as Schubert would have known and played, or an early twentieth-century Bechstein (such as the one I own), does not sound like a modern piano, and we should carry this appreciation into our playing and the sounds we strive to make. (It is reported by those who heard Chopin perform that he never played louder than mezzo-forte, even if he had written forte in the score.). Not all fortes are equal (nor all pianissimos for that matter!), and a forte or fortissimo in Schubert should not be played with the same volume as the equivalent dynamics in Rachmaninov or Stravinsky, for example. Schubert’s dynamics tend to be introspective and intimate, and his fortes generally lack the declamatory nature of Beethoven’s or Rachmaninov’s.

An appreciation of “psychological dynamics” is also important: dynamics should be nuanced to suit the genre, period, mood, key and character of the music. The word “dynamics” does not simply mean “loud” or “quiet”, and a whole host of adjectives and metaphors can be applied to suggest a particular sound and mood – vibrant, angry, energetic, lethargic, distant, lonely…. I have noticed a tendency amongst certain performers, who shall remain nameless, to offer very literal interpretations of dynamics. Add to this a very large grand piano in a medium-sized venue such as Wigmore Hall and one can feel as if one is being constantly hit over the head with sound, even in the back row of the hall where I usually sit. 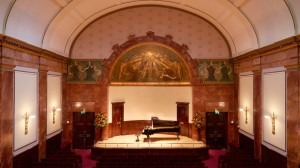 And here is another issue concerning the sound of the modern piano – performers need to make adjustments to their sound according to the size of the venue. A skilled pianist playing a properly set up modern piano can adjust his or her sound according to venue, acoustic, genre of music. Thus, a pianist such as Richard Goode, whom I heard in Schubert’s last three piano sonatas recently, can bring a richness to the fortes and fortissimos without a loss of beauty of tone. His sound was warm and orchestral, rather than simply loud. Equally, in the piano and pianissimo passages he created an incredible sense of intimacy which seemed to shrink London’s vast Royal Festival Hall to the size of Schubert’s salon. Such skillful, controlled and sensitively nuanced playing is of course the result of many years of experience, an understanding of each composer’s distinct soundworld, and the ability to judge the volume of sound one is going to make before the finger reaches the key.

Paul Badura Skoda plays Schubert on an 1826 Graf fortepiano, a 1923 Bösendorfer and a modern Steinway