In Tune Society
Bösendorfer
Carrying the Coat of Arms of Austria
by Georg Predota April 29th, 2015 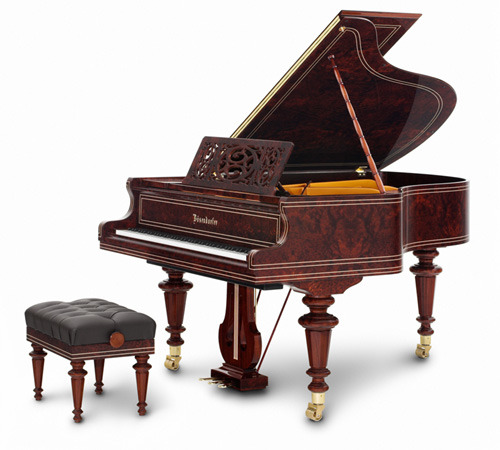 Every pianist knows that the standard grand piano has an 88-key keyboard! And in general, this assumption is certainly correct. However, if you stumble across the Bösendorfer Imperial Model 290 or the Bösendorfer Model 225, you will notice that these exceptional pianos sport 97 and 92 keys, respectively! This extension of the regular piano keyboard was the result of a request from Ferruccio Busoni in 1901. The famed pianist was looking for a custom-made piano that would allow him to faithfully transcribe some Bach organ works that originally called for a 32-foot bass pipe. To everybody’s surprise, the addition of the extra 9 bass notes had far-reaching consequences on the sonic characteristics of the instrument. Even when these extra notes are not directly struck, they richly resonate with the rest of the keyboard to produce a full-bodied richer and darker sound. 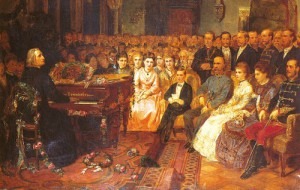 It all started on 25 July 1828, when Ignaz Bösendorfer registered his business as a piano maker in Vienna. Bösendorfer was the son of a carpenter who had studied at the Academy of Fine Arts. After completing an apprenticeship with the well-known piano builder Joseph Brodman—one of about 150 independent piano builders making their living in the city—Bösendorfer established his own workshop. He immediately went to work on improving the instrument. Above all, he wanted to maintain the mellow string sound while increasing the volume and sustaining power of the instrument, particularly in a powerful bass register. Bösendorfer’s effort quickly paid off as the Bösendorfer piano won a number of gold medals at industry exhibitions. And Emperor Ferdinand I granted the piano builder the title of “Imperial and Royal Forte piano Purveyor to the Court” in 1839. But it was the testimonial of Franz Liszt that really got the piano off the ground. After trying out a number of instruments, Liszt writes, “The perfection of a Bösendorfer exceeds my wildest expectations… In my opinion his pianos are the most perfect ones, sonorous and pleasing to the touch.”

When Ignaz Bösendorfer died in 1859, the company was taken over by his son Ludwig. Ludwig took the business to new heights, expanded the production facilities, and the Bösendorfer-Saal became one of the premiere performing venues in the city. However, Ludwig also affected exports into all corners of the globe. To celebrate the establishment of diplomatic relations between the Austria-Hungarian and the Japanese empire, an ornate Bösendorfer grand piano was presented to the Japanese emperor. And if you win the “Bösendorfer Piano Competition,” established in 1889 and still going strong today, you could take home a “premium piano” as your reward. By the turn of the 20th century
“Bösendorfer had taken the music-making voice of Vienna, extracted it out of the air, from the hearts of its people, from the depth of his own being and captured it in the ebony shrine of his pianos so that, enclosed within, it could be transported throughout the entire world.” Bösendorfer pianos had become the quintessence of the Viennese musical sound. 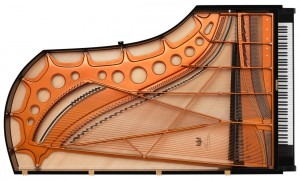 With the creation of the “Imperial,” sporting the extra 9 bass notes, Bösendorfer had created its flagship piano. Special pianos were designed by the most prominent architects of its time, including Theophil Hansen, Anton Grosser, Hans Makart and Josef Hoffmann. Following the devastating conflicts in the first half of the 20th century, however, Bösendorfer found it difficult to compete in the realities of the modern marketplace. Despite continuing the excellence of craftsmanship, the company was eventually sold to Kimball International, parent company of Kimball Pianos in 1966. The company returned to Austrian hands in 2002, but by 2007 all stock in Bösendorfer was sold to the Yamaha Company. Bösendorfer pianos are still exclusively built by hand. The wood is harvested during winter months and aged for 5 years in order to achieve the correct humidity and stability. The rim is made of solid sections of spruce—rather than bent veneers—all contributing to the instrument’s singing and sustained sound that has been the hallmark of the company for the last 180 years. Yet, the 21st century has come to Bösendorfer as well, as it has developed a digital grand piano reproducing system. Easily fitted to most Bösendorfer pianos, it allows for the direct recording and playback of pieces, digitally encoding all nuances of the performances.