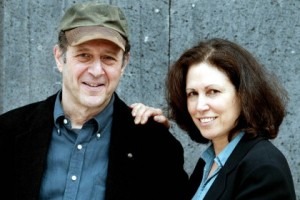 Working on tape-based techniques of looping and phasing by using recordings of fragments of speech, Steve Reich created a compositional process involving structures of minimalist art and musical technique. Simultaneously, Beryl Korot was working along very similar lines in the area of video art. As the editor of the journal Radical Software, Korot explored the technical and artistic possibilities of the new medium. “I was attracted to video art because it allowed me to combine a strong sense of content with formal innovation,” explains Korot. “The field was wide open and allowed for a great deal of experimentation for creating new forms.” They first met in 1974 at the “Kitchen,” New York’s premiere performance space during the 1970s. Since Reich was part of the German academic Exchange Service stationed in Berlin, Korot went for a visit. And in October of 1974 she visited the Nazi concentration camp at Dachau to explore themes of history and memory.

Once Korot returned to New York, she combined the video impressions into a twenty-four minute, four-channel video installation in black and white, with sound. Dachau 1974, a recognized classic of the genre, presents a sequence of images from the walls outside the camp to the barracks, sleeping quarters, the ovens, and a stream. Korot had learned to weave in early 1974, and “thinking of each channel as a single thread, she created a non-verbal narrative based on two sets of paired channels, with each set assigned identical images but in different rhythmic relationships to one another.” Steve Reich explains that the “timings between the channels are intrinsically worked out—four channels where the first and third and the second and fourth would be interlocked—a very musical-type structure.” Reich himself would musically encode his artistic response to the holocaust in his three-movement piece Different Trains for string quartet and tape in 1988. Given their similar artistic approaches in different mediums and profound interest in their shared Judaic backgrounds, the couple was married on 30 May 1976 in a traditional ceremony in Lower Manhattan conducted by Rabbi Ephraim Buchwald. Their son, Ezra Reich was born on 13 August 1978, and he is active as a singer/songwriter in New York City.

Bringing video art into a theatrical context, Korot began a collaborative period with her husband in 1989. The Cave, a video opera in three acts exploring the Biblical story of Abraham, Sarah, Hagar, Ishmael and Isaac, premiered at the Vienna Festival on 15 May 1993. Jewish mystical sources believe the ancient site in the town of Hebron to be a passageway to the Garden of Eden. “It is the only site in the world where Jews and Muslims worship in the same place, though not at the same time. To the extent that Christianity is the dominant religion in the West, The Cave is dealing with a root story that leads to the forefathers of Christianity and Islam.” Critics have described the opera as a “powerful and imaginative work of high-tech music theater that brings the troubled present into resonant dialogue with the ancient past, and invites all of us to consider anew our shared cultural heritage.” In 2002, Korot and Reich introduced their second collaboration, the documentary video opera Three Tales. Reflecting on the growth and implications of technology, the three parts engage with the crash of the German zeppelin Hindenburg in 1937, nuclear testing at the Bikini atoll between 1946 and 1954, and the cloning of Dolly the sheep in 1997. Historical film and video footage, video taped interviews, photographs, text, and specially constructed stills are recreated on computer, transferred to video and projected on a large screen. Sixteen Musicians and singers take their places on stage along with the screen, presenting the debate about the physical, ethical and religious nature of technological development. Three Tales, according to Korot, “is really about human beings and how we deal with the powers that are given to us.” And Reich, critics have suggested, has written some of his finest music. “Totally in control of the structure via a rigorous ground plan of tonality and tempo, he contributes tellingly to the evolution of each tale’s dramatic shape.” According to Reich, “the use of sampling and video in opera and music theatre is clearly growing. It’s simply an honest expression of the life we are living now. Music theatre has in fact, always reflected its time and its place.”