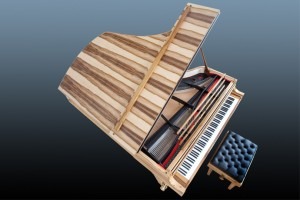 If you’ve been reading my column on instrument makers over the years, you certainly must have noticed that I am highly critical of the huge number of mass-produced and bland pianos that are being churned out by established brands every year. It’s really good for business, but it has done little to alleviate the all-pervasive sonic boredom. Luckily, as we have seen, there are some notable exceptions! And that includes one of the youngest piano makers on the planet! Stuart & Sons started handcrafting pianos in New South Wales, Australia in 1990. They produce only two basic models—a Studio Grand and a full Concert Grand Piano—available in an endless variety of exotic finishes that include the rare 2000-year old Tasmanian Huon Pine! But what is most remarkable is the fact that over the last 25 years, Stuart & Sons have handcrafted a mere 60 instruments! 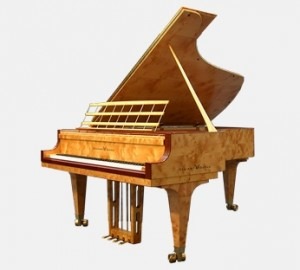 Stuart & Son believe that “the instrument is the voice through which the player communicates the emotional and intellectual fabric of the music.” If the piano is to remain a vital force ”it must continue to evolve.” As such, Stuart & Son have significantly extended the design and performance boundaries of the acoustic piano. For one, they have extended the frequency limits by offering instruments with 97 or 102 keys. That means, that a performer now has a full 9-octave range for the chromatic scale at his or her disposal. To subtly deal with this expanded tonal range, the Stuart & Son pianos feature four, rather than the customary three foot-pedals. The left pedals modify the dynamic and textural aspects of the sound by shortening the travel distance of the key and hammer, and reducing the number of struck strings. According to Stuart & Son, “these pedals can be used independently or simultaneously. Neither of the dynamic control pedals require full depression but should be applied and operated as the ear and taste of the performer dictates.” 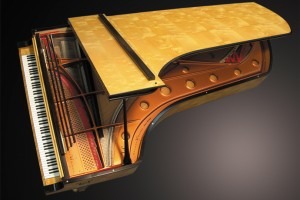 One of the key innovations of the Stuart & Son instruments concerns the bridge “agraffe.” This oddly named device¬¬—usually made of solid brass—anchors the strings and thereby determines the speaking length of each string. Traditionally, the strings are held horizontally against the hammer strike. The newly designed agraffe now holds the strings vertically, lining up in the same direction as the hammer strike. According to Stuart & Son, their scientifically designed device encourages the strings to vibrate in a more controlled manner, “providing outstanding dynamic range, longer sustain and greater clarity sympathetic to the entire piano repertoire.” In addition, since 2007, the laminated soundboard contains carbon fiber, improving sound radiation and disbursement while adding rigidity and reducing weight. Technical innovations aside, the Stuart & Son pianos are visually stunning! The company uses timbers from ancient forests preserved for eons in the peat and humus of the forest floor. Some of these timbers, like the Tasmanian Huon Pine, are up to 2000 years old! Before you rush out to get your very own Stuart & Son piano, be aware that the price is quoted according to individual requirements, and that it will take at least 12 months for your instrument to be hand built and ready. Judging from the sound and the looks, it’s worth the wait!