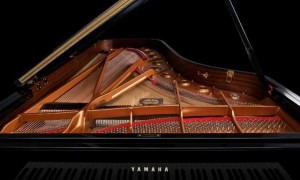 In my youth, I spent countless Saturday and Sunday afternoons playing for weddings until I was finally able to buy my own wheels. Since playing for weddings does not really pay all that well, I had to settle for two wheels in the shape of a Yamaha motorcycle.
One of the reasons I decided on a Yamaha bike—all other things being equal—was because I was fascinated by their brand logo featuring three interlocking tuning forks. Mind you, I only later came to understand what a bunch of tuning forks had to do with a blazingly fast motorcycle. It really is rather simple, because Yamaha Corporation was first incorporated on 12 October 1897 as a piano and reed organ manufacturer. Originally, the company was named “Nippon Gakki,” which simply translates to “Japan musical instrument,” and it produced reed organs. When the popularity of the reed organ was gradually replaced by upright pianos in the 1890’s, Torakusu Yamaha saw his opportunity and the first upright Japanese-made piano rolled off the assembly line in 1900. By 1902, they had added their first grand piano to the product line. Torakusu took his pianos to select international exhibitions and managed to win honors at the St. Louis World’s Exposition in 1904. 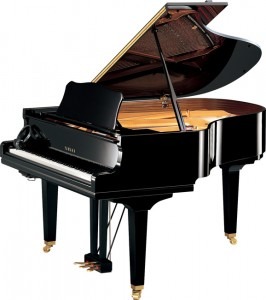 With much of the world embroiled in the First World War, Japan saw a flowering of its industries. Yamaha established a significant footprint in Asia, and by 1920 the company employed 1,000 workers and produced 1,200 pianos a year. A number of production facilities were established and quickly pressed into military service during the tumultuous years of the Second World War. Although all piano factories were thoroughly destroyed, in the years following the war the company decided to put their metallurgical technologies to use in the production of motorcycles. However, they also put their knowledge into the casting of unique metal piano frames, achieving a unique timbre and assuring that the instrument stayed in tune longer. They also instigated a specific conveyor belt system that significantly decreased the amount of time spent on the production of the instrument. Most significant was a revolutionary kiln drying technique that enabled the drying of the wood in pianos, reducing the production time of an instrument from 2 years to 3 months. By 1966, Yamaha produced 100,000 instruments a year, making it the world’s largest piano manufacturer at that time.

The company produced its first concert grand in 1967, and won a contract to provide 53 grand pianos to the Los Angeles Board of Education. Over the years, the company has created an extremely broad spectrum of different piano models at different price points for buyers of all needs and budgets. The acoustic piano range includes the premium piano CF Series, and as of 20 December 2007, Bösendorfer of Vienna as well. Many pianists feel that the CX Series of Grand Pianos best represent the piano maker’s art, and countless upright models are scattered throughout educational facilities around the world. Yamaha Corporation has also heavily invested in new technologies, introducing a long line of digital pianos. Most significantly was the introduction of a hybrid piano line that includes the Disklavier—a modern version of the “player piano,” and the “Silent Piano.” Employing new engineering technologies, a sophisticated sensor captures all the movement of the keys and sends them to a digital tone module. The instruments plays like a regular acoustic piano, with the pianist able to listen to the sound through headphones. Classical pianists Frederic Chiu, David Kaplan, Anne-Marie McDermott and Vassily Primakov, among numerous others, have exclusively relied on Yamaha pianos, as have popular bards James Blunt, Elton John, Alicia Keys and Paul McCartney. And let’s not forget the jazz mastery of Chick Corea, Hiromi and Jamie Cullum! On a Yamaha piano, everything from Bach to Zappa is possible!