Features
On This Day
29 May: Erich Wolfgang Korngold Was Born
by Georg Predota May 29th, 2022
Tags: Korngold 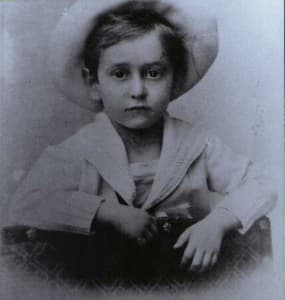 Erich Wolfgang Korngold, possibly the most phenomenal musical prodigy of all time was born in Brünn, currently Brno, on 29 May 1897 to Julius Korngold and Josefine née Witrowsky. His older brother was named Hans Robert, with their middle names chosen to pay homage to Julius Korngold’s favorite composers, Robert Schumann and Wolfgang Amadeus Mozart. Julius Korngold had studied to become a lawyer at Vienna University, and concurrently he studied music with Anton Bruckner. Julius Korngold went on to succeed Eduard Hanslick as the most influential music critic in town, working for Vienna’s prestigious “Neue Freie Presse,” (New Free Press). That newspaper was the progressive voice of 19th century Liberalism, supporting the equality of all communities and cultures within the Austro-Hungarian Empire. The publication featured the greatest writers of the day, ranging from Theodor Herzl to Winston Churchill. For Julius Korngold, and much of his generation, music was the “most important cultural aspect of existence and not to be toyed with.” 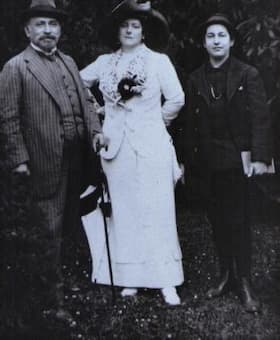 Julius Korngold quickly realized that his younger son had remarkable talents. It is reported that he could beat time with a wooden kitchen spoon at the age of three, and that he was picking out tunes from Don Giovanni at the piano by five. He also joined his father for informal recitals of two-and four-hand duets, “and in his sixth year, he was jotting down musical ideas in a small notebook. One of the great questions in Erich’s biography is the manner in which he started to compose. A critic writes, “Mozart and Mendelssohn were able to inject their youthful brilliance into the ambient music of the day. Korngold appears to have inhabited his own harmonic environment from his earliest years.” 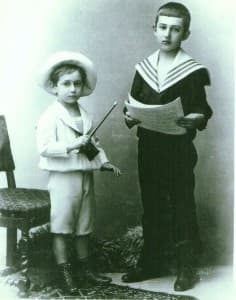 Father Julius reports that Erich’s first compositions “did not display the influence of the music he would have been exposed to at home.” Erich’s wife later wrote in her biography “Erich had heard the music of Richard Strauss since suckling at his mother’s breast and was able to play Elektra from beginning to end on the piano from memory.” In the event, young Erich received keyboard lessons from a distant relative, but his father quickly determined that the boy needed more systematic training. As such he sent him to Robert Fuchs, a composer, conductor, and professor of music at the Vienna Conservatory. 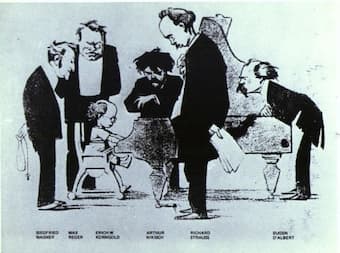 Some of Erich’s first compositions were privately published by his father, and distributed to a number of musical authorities. In his memoirs Julius claims that he sent them without identifying the composer “and offering no information beyond the fact that he was a young boy.” 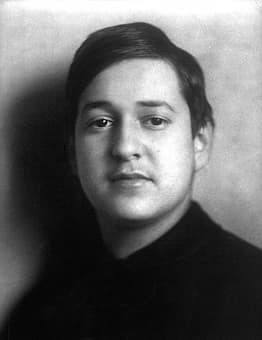 Today we know this claim of anonymity to be untrue, but word of the young genius started to spread rapidly. It seemed incomprehensible that a mere boy was capable of writing exquisite lyrical melodies, rich textures, virtuoso orchestration and display a strong sense of theatricality that was already fully developed. Erich played his cantata Gold to Gustav Mahler, who pronounced him a genius. Mahler also recommended that Erich continue his studies with Alexander Zemlinsky, known as a composer and pedagogue, and as the principal conductor at the Vienna Volksoper. Julius Korngold was shocked, as Zemlinsky “was the brother-in-law of Schoenberg, the maddest of all Viennese composers in Julius’ view.” Julius habitually trashed Zemlinsky in his reviews for sacrificing “old-fashioned melody on the diffusive French altar of Impressionism.” 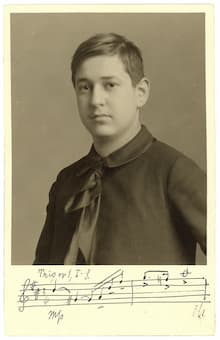 The lessons started in mid-1907 and ran until 1911, with Zemlinsky providing Korngold “with a solid grounding in harmony, form, voice-leading and orchestration, as well as the opportunity to improve his already impressive keyboard skills.” Zemlinsky wrote that Erich admired Puccini “to the point of near obsession,” while Korngold relates that his teacher merely “improved his piano technique.” Differing accounts none withstanding, Erich’s period of study produced a number of works for solo piano, including two large-scale sonatas, a suite of six character studies based on scenes from Cervantes’ Don Quixote, and seven fairy tale pictures inspired by children’s stories. He also wrote his first chamber composition, an ambitious four-movement piano trio published as his Op. 1. His ballet-pantomime Der Schneemann (The Snowman) was presented in a four-hand arrangement at a charity gala in Vienna in April 1910, and the orchestrated version—fashioned by Zemlinsky—premiered under Felix Weingartner in October. It caused a sensation, and Richard Strauss tellingly wrote, “One’s first reaction that these compositions are by a child are those of awe and concern that so precocious a genius should follow its normal development…This assurance of style, this mastery of form, this characteristic expressiveness, this bold harmony, are truly astonishing!”