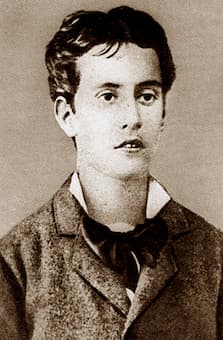 Giacomo Antonio Domenico Michele Secondo Maria Puccini was born in Lucca, Italy, on 22 December 1858. He was the sixth of nine children by Michele Puccini and Albina Magi, and his birthplace was on the second floor of the historic family home in Corte San Lorenzo, not far from piazza San Michele in Foro. The birth was difficult, and his parents feared that the boy’s life was in danger. As such, they applied for a special permit to have Giacomo baptized the very next day. The Puccini family was an important local musical dynasty having occupied the position of maestro di cappella for 124 years. His great-great-grandfather, also named Giacomo, had studied music in Bologna and became the organist of the Cattedrale di San Martino and Master of the cappella of the Dome of Lucca. His son Antonio Puccini followed in his father’s footstep, and the grandson Domenico composed primarily chamber music and opera. Giacomo’s father Michele was also the organist and the choirmaster at the Duomo, and it was assumed that Giacomo would take over that position in time. However, Michele unexpectedly died when Giacomo was only six years old. 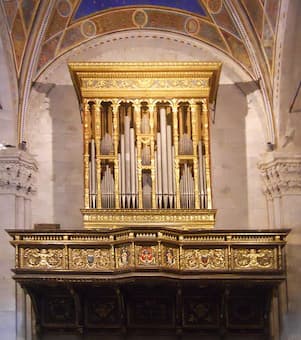 Young Giacomo did participate in the musical life of the Cathedral as a member of the boy’s choir. Following the death of his father, Giacomo was sent to study music with his maternal uncle Fortunato Magi. Magi wasn’t particularly impressed, as he claimed that his nephew “lacked talent and was not a very diligent student.” In addition, there were persistent rumors that Giacomo was a bit of a lad. Supposedly, to earn a bit of cash he stole and sold some of the organ pipes from the Dome, and he was found guilty of faking the suicide of one of his friends. Puccini did eventually receive a diploma from the Pacini School of Music in Lucca in 1880, having furthered his studies with Carlo Angeloni. Angeloni introduced him to the scores of Verdi, and Puccini enjoyed first success as a composer. He secured financial backing, and was sent to the conservatory in Milan for further study. 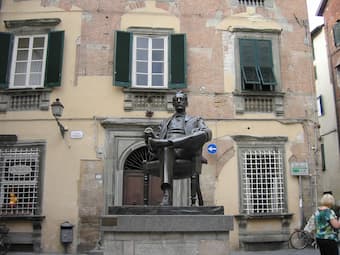 Statue of Puccini in Lucca

Puccini studied composition with Stefano Ronchetti-Monteviti, Amilcare Ponchielli, and Antonio Bazzini, and he shared a room with Pietro Mascagni. At the age of 21 he composed his Mass, “which marks the culmination of his family’s long association with church music in his native Lucca.” During his first three years in Milan “Puccini laid the foundations for his future success.” In addition, he attended performances of all the major operas of Bizet and Gounod at La Scala and other theatres. The conservatory orchestra performed his graduation project, the Capriccio sinfonico on 14 July 1883. The work not only impressed his teacher, but also received praise from the critic Filippo Filippi, one of the foremost champions in Italy of German Romantic symphonic and lyric music. His review ran in the Milanese publication “La Perseveranza,” and established Puccini’s reputation as a young composer of promise in Milan. 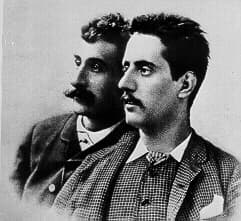 Having scored a hit with his Capriccio Sinfonico, Puccini was starting to discuss an opera project with his teacher Ponchielli. He was put in touch with the young journalist, dramatist and poet Ferdinando Fontana, and they agreed to collaborate on an opera. Le Villi (The Fairies) was entered into a competition sponsored by the publisher Sonzogno, but it failed to make an impression with the judges. Puccini, however, was thrilled to see it performed in public, and he wrote to his mother on the night of the premiere at the Teatro dal Verme on 31 May 1884, “Theatre packed, immense success; anticipations exceeded; eighteen calls; finale of first act encored thrice.” 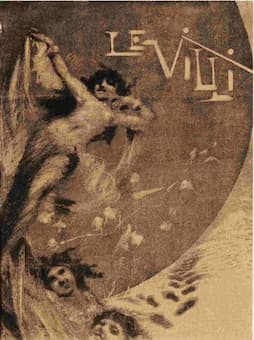 The success of this performance prompted the publisher Giulio Ricordi to purchase the opera for publication. Ricordi urged Puccini to expand the work, and the composer produced a new and revised version later that year. Puccini made additional modifications to the score in 1885 and for first printing in 1887, with the final version reaching the public in 1889. Scholars have suggested that the “most original music in Le Villi is given to the tenor…with Puccini displaying gifts which he was to develop fully in the next few years: melodic originality, harmonic delicacy, dramatic intuition and flexibility in the orchestra.”