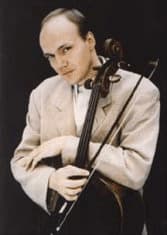 Known for his “compelling performances, combining fierce intensity and passion with integrity and grace,” Norwegian cellist Truls Mørk has long taken audiences on compelling musical journeys. One of the pre-eminent cellists of our time, he was the first Scandinavian to be a finalist and prizewinner in the Moscow Tchaikovsky Competition in 1982. He was also a prizewinner in the Naumberg Competition in New York in 1986 and the Cassado Cello Competition in Florence in 1983, and received the UNESCO Prize at the European Radio-Union competition in Bratislava. Born on 25 April 1961 in Bergen, Norway, his parents were professional musicians; his father John Fritjof Mørk was a cellist and his mother Turid Otterbech a pianist. “My mother began teaching me the piano when I was seven years old,” he writes, “but it didn’t work out because my progress did not keep up with her great ambition for me.” Truls tried his hands on the violin, but eventually his father decided that he should play the cello. “I was happy to play the cello because… I felt a certain affinity for the cello since my father played so beautifully; I knew how it was supposed to sound.” 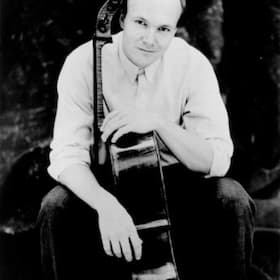 Mørk received his first cello lessons from his father, who told him “don’t practice too much. If you do, you will become a musician.” Truls progressed quickly but his father still did not want him to take music too seriously. Nevertheless, at the age of seventeen Mørk began his studies with Frans Helmerson at Edsberg Music Institute. Since Helmerson was frequently on tour, he only gave lessons every few weeks. “Between lessons, his students, six of us at the time, would stay at school from seven in the morning until eleven at night, practicing, discussing music, and listening to records. It was a very inspiring environment.” Helmerson, according to Mørk, had a philosophical approach to music. “He rarely discussed fine technical details, like which fingerings or bowings to use, but he did talk about how one should play music from the different periods. In Beethoven, for instance, he would emphasize the importance of articulation, especially with the smaller valued notes. He felt that overlooking the small notes was a sign that we were thinking of the music in terms of long lines, which he considered to be an overly Romantic approach. When playing Bach he had a more Romantic view; he insisted that we play Bach in a fairly strict tempo. He also emphasized articulation, like he did with Beethoven.” 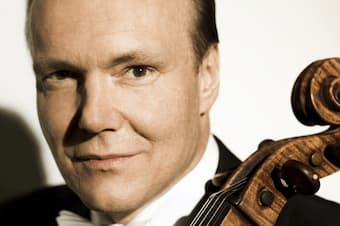 Fascinated with the Russian School of cello playing, Mørk continued his studies with Russian cellist Natalia Schakowskaya. Truls writes, “I was a great Rostropovich admirer in those early years. I loved his ability to create so many different combinations of dynamics and colors on the cello. Schakowskaya was a student of Rostropovich, so I was extremely happy to work with her.” 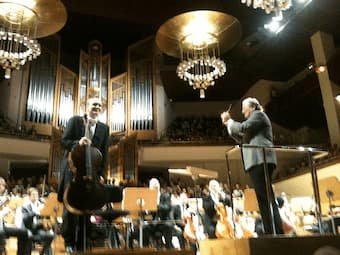 Mørk was particularly fascinated by a whole range of vibrato that was being taught to him. “Some argue that an even vibrato helps establish a sense of longer line, but I don’t agree with this approach. Music is not composed of smooth lines. It is composed of individual notes that are strung together. Just because notes are connected does not mean they all have to sound alike. Some notes are more important than others and therefore deserve special treatment, warranting a different color and intensity.” Schakowskaya was also fundamentally responsible for elevating Truls’ playing to the highest technical standard. “She had me work very hard on scales and etudes,” he explained. “She also demanded incredible precision and expected, no matter what I played, whether a scale, etude, or concerto, that it be played on a high level. She had an extremely high standard and pushed me very hard, for which I am very grateful.” 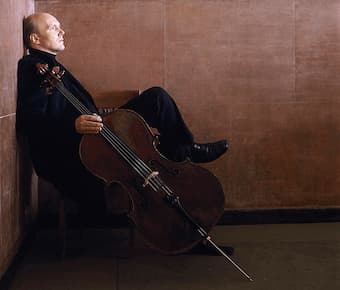 In his performances, Mørk strives for maximum intensity and musical input with a minimum of risk. “I don’t want to risk messing up the passage or losing my sound, so I spend a lot of time in my practice sessions going to the edge and over it. I try over-pressing with my bow or playing softer than the cello can speak, since I think it’s important to know where the limits really are and how far I can go. It’s crucial that you know your instrument by feeling or even by look so that you can compensate for the fact that things sound much differently on stage. I want to do as much as I can on stage while still playing in control… I play a wonderful instrument, but I always want more than it is able to give.” Mørk is adamant that music can be performed in many different ways. “You are free to play however you wish. You can be cerebral, emotional, spontaneous, or whatever works for you. Everybody’s approach is unique, and that’s what makes music so fascinating.” Truls Mørk is a great champion of contemporary music, and he has played well over 30 premieres, including works by Victoria Borisova-Ollas, Esa-Pekka Salonen, Rautavaara, Hallgrimsson, and countless others. In 2009, a tick bite led to a potentially career ending infection of the central nervous system, but after 18 months away from concert activity, he was able to resume his career.