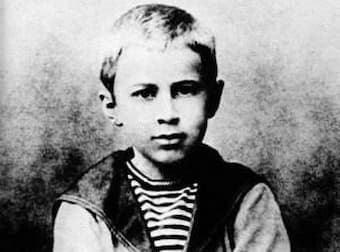 Sergei Prokofiev was born on 23 April 1891 in Sontsovka, now located in Ukraine but then a remote rural estate of the Yekaterinoslav Governorate of the Russian Empire. His father Sergey Alekseyevich Prokofiev was an agronomist and managed the estate of Sontsovka, where he had gone to live in 1878 with his wife Mariya Zitkova, a well-educated woman with a feeling for the arts. She was described by Reinhold Glière, Prokofiev’s first composition teacher, as “a tall woman with beautiful, clever eyes…who knew how to create an atmosphere of warmth and simplicity about her.” 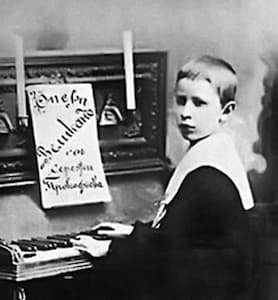 The couple had married in the summer of 1877, and Sergei Alexeyevich found employment as a soil engineer, employed by one of his former fellow-students, Dmitri Sontsov. Prokofiev was the last of their three children, but his two older sisters had died in infancy, so that to all intents and purposes “he grew up as a much indulged and pampered only child.” His father supervised his general education in the natural sciences; a French governess and also, at various periods, “two German governesses were engaged to teach him foreign languages; and his mother provided his early education in the arts.” 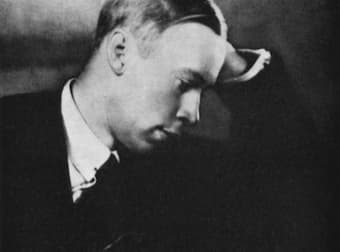 Prokofiev started taking first piano lessons from his mother at the age of four, and his earliest attempts at composition also date from this period. The “Indian Gallop,” which was written down by his mother, was followed by various waltzes and marches and other small piano pieces written between 1896 and 1901. His mother took him to the opera in both Moscow and St Petersburg, and Sergei became acquainted with the standard stage repertory of Russia at the time. Greatly inspired, ten-year-old Sergei started to compose his first opera “Velikan” (The Giant). It is scored in three acts and six scenes, and it was performed for his family “with his playmates taking the parts.” Shortly thereafter he was busy with his second operatic project “on a subject of the Robinson Crusoe type ‘On Desert Islands’ of which only a few pages survive.” It speaks to Prokofiev’s self-confidence that already at this early age he began planning a thematic catalogue in which to enter the titles and melodic incipits of his works. When the family stopped in Moscow on their way back from St Petersburg in January 1902, they made contact with Sergei Taneyev, director of the Moscow Conservatory. Taneyev suggested that the young Prokofiev “study theory with Pomerantsev, and a few lessons did take place; in addition he suggested that one of his own students, the pianist Aleksandr Goldenweiser, should tutor Sergei in composition.” 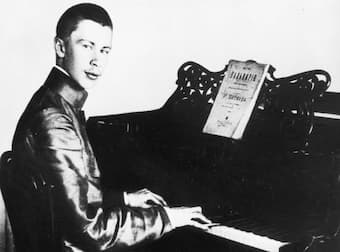 When Goldenweiser declined, Taneyev recommended the young composer and pianist Reinhold Glière. As such, Glière spent the summers of 1902 and 1903 at Sontsovka, instructing Prokofiev in theory, composition, instrumentation and piano. During the winter months, when Glière was engaged otherwise, the instruction continued via correspondence. “A phase of intensive and extremely productive activity as a composer dates from this point, and it is clear that even as a boy Prokofiev was developing the habit of working on several pieces at once.” The 11-year-old Sergei insisted on taking a stab at a symphony, and the first movement was completed in full, with the other movements drafted in piano score. Glière asked him to write short pieces built into the structure of a cycle, and Prokofiev responded with a number of “Little Songs,” five series each of 12 pieces. The following year Prokofiev wrote a violin sonata, and “encouraged by Glière, he set to music Pushkin’s little tragedy ‘A Feast in Time of Plague’.” Cesar Cui had previously set that particular text, and when Glière sent the score to Prokofiev, the buddying composer was racked by jealously. Apparently, he regarded the rival opera with outright hostility, but he nevertheless “tried systematically to learn from his more mature model.” In 1904, Prokofiev began work on his fourth opera “Undina,” and he completed a vocal score in 1907. 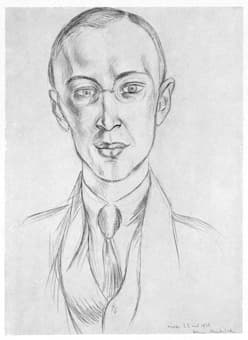 Prokofiev did write about his lessons with Glière several decades later. He gave due credit to his teacher’s sympathetic method but complained that “Glière had introduced him to square phrase structure and conventional modulations, which he subsequently had to unlearn.” However, it was becoming apparent that Sergei had a unique musical gift and his mother was exploring educational options in Moscow and St Petersburg. In the spring of 1903, the 12-year-old Prokofiev was introduced to Glazunov, then a professor at the St Petersburg Conservatory. With the help of Mikhail Chernov, a senior student, Prokofiev passed the entrance examination to the St Petersburg Conservatory in the autumn of 1904. He studied piano with Alexander Winkler, conducting with Nikolai Tcherepnin, and theory with Anatoly Lyadov. He described Lyadov as “dry and sparing of words,” and as a teacher “who took no interest in his student’s creative development.” Prokofiev had nothing nice to say about his study of orchestration with Rimsky-Korsakov, yet he did express his utmost admiration for his later operas. Since Prokofiev was several years younger than most of his class “he was viewed as eccentric and arrogant, and annoyed a number of his classmates by keeping statistics on their errors.” However, during his student years he also met Nikolai Myaskovsky, ten years his senior. “A lifelong friendship between them developed, and was maintained even during Prokofiev’s years abroad. It was a relationship allowing room for frank and critical discussion of both men’s works.”