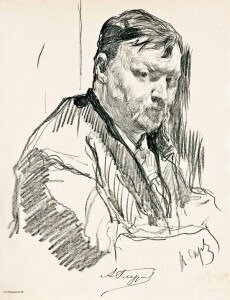 The saxophone was a relative latecomer to the family of woodwind instruments. Developed in Paris by Adolphe Sax in the 1840’s, the instrument features a single reed mouthpiece like the clarinet, a conical brass body like the ophicleide—the bass member of the bugle family—and the acoustic properties of both the French horn and the clarinet. With the projection of a brass instrument and the agility of a woodwind, the saxophone quickly found favor among French composers and secured an early place in French military bands. Gradually it was making appearances in French opera, and it was also used for special effects and for adding orchestral color. In America, the March King John Philipp Sousa extensively used the instrument in the 1890’s, before it became an essential member in jazz ensembles and swing bands. Yet there is also a substantial repertoire of concert music in the classical idiom for the members of the saxophone family, among them the Concerto for Alto Saxophone and String Orchestra by Alexander Konstantinovich Glazunov (1865-1936).

Glazunov was one of the leading Russian composers in the generation immediately following Tchaikovsky. A prodigious musical talent, he began his studies with Rimsky-Korsakov at age 15, and in short order, composed his first symphony. Premiered by Balakirev in 1882, this work practically established Glazunov’s reputation overnight. Conducting engagements in Weimar, Paris and London soon followed, as did a number of highly successful symphonies and the ballet Raymonda. In 1905, Glazunov was appointed director of the St. Petersburg Conservatory, navigating the venerable institution founded by Anton Rubinstin through the tumultuous times of the 1917 Revolution. By all accounts, Glazunov was categorically opposed to government interference in cultural and musical matters, and felt compelled to leave the Soviet Union in 1928. He restlessly traveled the globe for several years before eventually settling in Paris.

Glazunov had always been supremely interested in the distinctive musical characteristics and versatile tone color of woodwind instruments. So it came as no surprise when he announced to his friend Oseevich Shteinberg on 21 March 1932, “I have an idea to write a quartet for saxophones. These instruments are distinctively audible; in the orchestra they even cover regular woodwinds by their sound. The novelty of this work really thrills me, because I have formerly writing only string quartets.” Premiered in a private concert in 1932, the composer was most pleased, specifically commenting that “the performers are such virtuosi that it is impossible to imagine that they play the same instruments as we hear in jazz. What really strikes me is their breathing and indefatigability, light sound, and clear intonation.” After hearing a performance of the Saxophone Quartet on 14 December 1933, the Danish Saxophonist Sigurd Rascher approached Glazunov with a request for a saxophone concerto. Initially hesitant, Glazunov eventually agreed, and by 4 April 1934, the work was nearly completed. Rascher, who was living in exile in Copenhagen, traveled to Paris to view the score with the composer, and they agreed on specific tempi and a new cadenza. The world premiere took place on 26 November 1934 in Nyköping, Sweden, with the Norrköping Symphony Orchestra conducted by Tord Benner and Sigurd Rascher as soloist.

Unlike other composers of his day, Glazunov seemed entirely immune to the already well-established role of the saxophone in the world of jazz. His Concerto is entirely classical, focusing on the instrument’s capacity for lyrical expression. Unfolding in a single, continuous movement, the work is essentially a free rhapsody contrasting expressive lyrical melancholy with a number of extroverted interjections. Frequent tempo changes demand the highest technical and musical skills from the performer. “Smooth, cantabile playing in the many slow sections; tonal control across a wide dynamic range as the melody winds up and down the scale; and, in the most intricate, animated passages, nimble fingering and effective glissandos.” Glazunov did provide a long and increasingly agitated cadenza, but most soloists today prefer to substitute their own. No matter whose cadenza is actually played, it structurally separates the restrained opening section from an energetic, dance-inspired finale. Consummate craftsmanship and the skillful exploration of the sonorous possibilities of the saxophone have significantly contributed to establishing the Glazunov Concerto as the most famous work for saxophone ever written in the classical context.