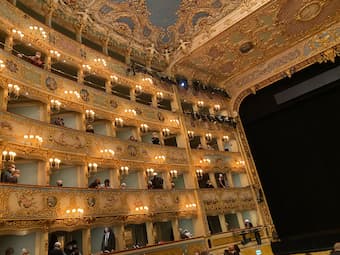 For the music obsessed, no visit to la Serenissima would be complete without an evening at the opera. Venice’s legendary Teatro La Fenice opera house, reopened in 2004 after the catastrophic fire of 1996, was resplendent with its riotously colourful and mildly kitsch auditorium. The theatre was sold-out with a crowd of mostly locals. This was still a few weeks before the opening of the Biennale when all hell breaks loose, hotel prices can triple, and the blight of tourism becomes unbearable.

Giuseppe Verdi’s fourth opera, I Lombardi alla Prima Crociata, performed in its first modern-day staging at La Fenice, proved an unexpected gem. For a stage not generally known for cutting edge and innovative performances, the Venetians put on an impressive and satisfying performance, daring to present a critical edition (David R.B. Kimbell) that more closely follows Verdi’s instructions than the version commonly seen in theatres. 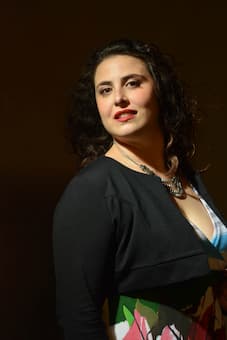 The cast was completely Italian and strong throughout but Roberta Mantegna delivered a veritable tour de force as Giselda. She dominated the stage throughout the evening with her powerful, precise soprano and brought down the house with her Act 4 “Qual Prodigio.” She also was a forceful actor, portraying a confident heroine who furiously rages against the senseless wars in the name of religion.

Vocally, she blended stunningly with Antonio Poli as Oronte, the son of the tyrant of Antioch, with whom Giselda enjoys a short-lived but consequential romance. Poli’s voice has grown significantly and developed beautifully since this reviewer first saw him as Fenton in 2013 at la Scala in Milan. His slightly veiled voice is luscious and carrying.

The role of Arvino, the other tenor and good Folco brother, was convincingly portrayed by Antonio Corianò whose tenor is clear and pleasing though occasionally forced. 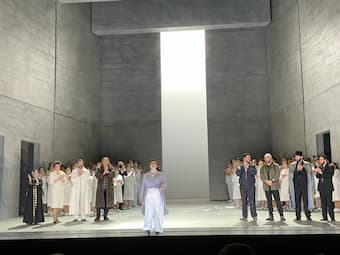 The chorus held their own despite being fully masked in this opera that demands their presence in every act.

Sebastiano Rolli led the orchestra with spirit and energy, though occasionally he let the volume from the pit overflow without discipline. But he clearly proved why this underappreciated opera is worth discovering anew.

I Lombardi is widely acknowledged to be an immature, imperfect, even experimental work of the young Verdi, and one that is best performed with period sets and costumes. Director Valentino Villa clearly had other ideas, though they were not consistently or always convincingly applied.

The director veered between the traditionally rooted story and the use of the Crusades as a metaphor for more contemporary religious conflicts. The Crusaders at one point vengefully ransack a magically inserted Arab convenience store and even waterboard one of the staff in an apparent nod to US wartime excesses, but this message was haphazard, much as the odd choice of costumes (Elena Cicorella). Pre-crusading Lombard women were dressed in Nurse Ratched uniforms and waved machine guns, while the male Crusaders looked like orderlies from One Flew Over the Cuckoo’s Nest. Commentary on the insanity of the Crusades, or just a coincidence?

A symbolic and murderous dance of two nearly nude male dancers accompanied the stunning violin solo and was principally an unnecessary distraction from this most unusual operatic interlude that sounds more like Paganini than Verdi.

The minimalist stage set (Massimo Checchetto) was a sepulchral and cavernous cement grey with back and side panels occasionally opening to let in light suggesting their surroundings, and occasionally manipulated to reveal the all-important cross in whose name the Crusaders are fighting.

The singers clearly thrilled the audience which was tempted but not quite convinced to stand for an ovation. La Serenissima never ceases to amaze.