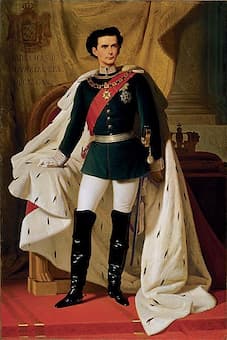 Ludwig II ascended to the throne of Bavaria in 1864 at the age of eighteen. By that time, he was already demonstrating signs of mental illness, and he frequently heard voices. Eventually, Ludwig would be deposed based on a report by four psychiatrists, who declared that the King suffered from paranoia and concluded, “suffering from such a disorder, freedom of action can no longer be allowed and Your Majesty is declared incapable of ruling.” 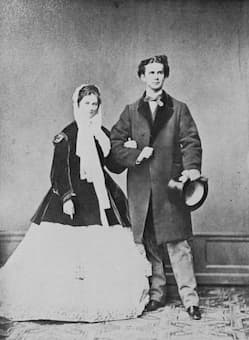 The question of his clinical insanity remains unresolved, but most commentators today agree that Ludwig was gay. He was engaged to his cousin, Sophie Charlotte, but the proposed union seemed to have been a source of great distress. Under pressure to produce an heir, Ludwig repeatedly postponed the wedding date and eventually called it off. As he wrote to his former fiancée, “My beloved Elsa! Your cruel father has torn us apart. Eternally yours, Heinrich.” As you might have noticed, the names Elsa and Heinrich originate from characters in Wagner’s opera Lohengrin. As Ludwig subsequently added in his letter to Sophie, “The main substance of our relationship has always been Richard Wagner’s remarkable and deeply moving destiny.” 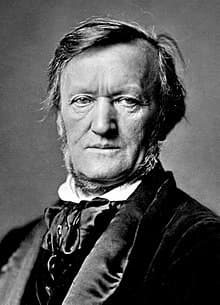 Ludwig had a succession of close friendships with men, but his infatuation with Richard Wagner is perhaps the most intriguing. At age 15, Ludwig had first seen Lohengrin followed quickly by Tannhäuser. In 1864, Wagner was given an unprecedented audience with Ludwig in the Royal Palace in Munich, and Wagner reports, “Alas, he is so handsome and wise, soulful and lovely, that I fear that his life must melt away in this vulgar world like a fleeting dream of the gods.” Ludwig became a patron of Wagner, and some would say it salvaged Wagner’s career. “Without Ludwig, Wagner’s later operas are unlikely to have been composed, much less premiered at the prestigious Munich Royal Court Theatre.” After the premiere of Tristan and Isolde, political intrigue forced Wagner to leave Munich for six months, and Ludwig writes to Cosima, “I tell you, I cannot bear to live apart from him much longer. I suffer terribly… this is no passing, youthful infatuation…” Ludwig might not have been fully aware of the relationship between Cosima and Wagner, and in the end, Ludwig heeded Wagner’s advice and stayed in Munich. 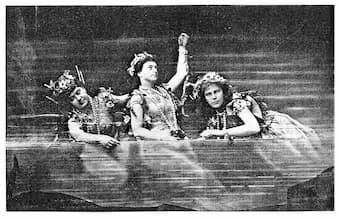 Wagner was shrewd enough to play on the infatuation of the King and used his most flirtatious language in his letter to Ludwig. After spending some time together at one of the royal estates, Wagner wrote, “What bliss enfolds me! A wonderful dream has become a reality! How can I find words to describe to you the magic of this hour? I am in your angelic arms. We are near to one another.” Wagner, of course, was primarily concerned with retaining the steady flow of funds, “and may not have fully understood the harm this may have done for a fragile young man such as Ludwig.” As Wagner proudly proclaimed to a friend, “He, the king, loves me, and with the deep feeling and glow of first love; he perceives and knows everything about me, and understands me as my own soul. He wants me to stay with him always.” Ludwig’s enormous fairy-tale castles virtually bankrupted the country, “but having failed in the political and domestic realm, he made his dream reality in art and music. He certainly spared no expense in the staging of Wagner’s operas, which were often, as has been reported, “performed with Ludwig the sole member of the audience.” 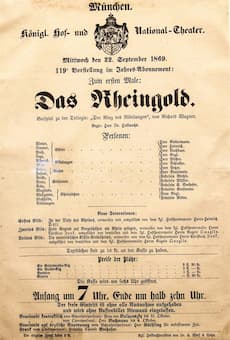 However, Ludwig and Wagner had a tremendous falling out over the first performance of Das Rheingold. Ludwig was eager to have the premier performance in Munich, but Wagner wanted to wait until the entire Ring Cycle had been completed. Being King and the holder of the copyright, Ludwig insisted that the opera was to be produced at the Munich Hofoper without further delay. Wagner was furious because they had markedly different visions as to the function of theatre. Ludwig loved the theatre for the creation of a fictional magical world on stage that involved the most advanced stage machinery available. For Wagner, on the other hand, acting and singing were the most important vehicles of the performance. As he wrote to Cosima, “I look forward to dreaming myself into a different, more beautiful world; because the world, the spirit, the times, that rule today, is horrible, the people so awful, diseased by the pestilent ideas of the New Era.” 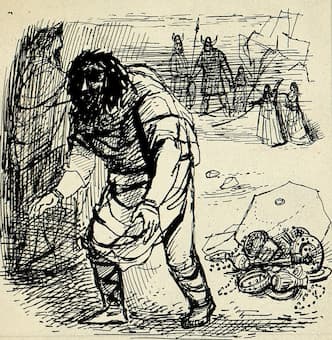 As such, Wagner did everything in his power to sabotage the production scheduled for August 1869. For one, after a troublesome dress rehearsal, Wagner urged the conductor Hans Richter to resign. Ludwig was not amused as he sacked Richter and appointed another conductor in Franz Wüllner. The premiere was rescheduled for 22 September 1869, and Wagner refused admission to the rehearsals at the theatre. Opinions differed on the success of the premier, with Cosima writing in her diary “that the performance was portrayed in the Munich press as a lavishly decorated, boring work.” The audience, in turn, appears to have been enamored by the novel scenery and the stage effects.

Richard Wagner: Das Rheingold, “Entry of the Gods into Valhalla”