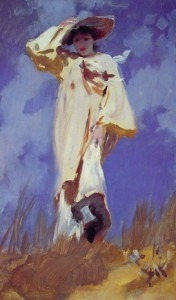 Cosima Liszt was the illegitimate daughter of the Hungarian pianist and composer Franz Liszt and his mistress, Marie, Comtesse d’Agoult. In order to continue his independent lifestyle — he also forbade contact between mother and daughters — Franz placed Cosima, together with her sister Blandine, in the care of his mother Anna. Liszt’s relationship with his children remained formal and distant, and he eventually moved them to Berlin and into the care of Franziska von Bülow. Franziska’s son Hans was one of Liszt’s best students, and he took charge of the musical education of the two girls. The piano bench, once more, became the matchmaker and Hans fell in love with Cosima. Daddy Liszt approved of the union, and the couple was married on 18 August 1857. During their honeymoon they visited Richard Wagner in Zürich. According to Wagner, “she fell at my feet, and covered my hands with tears and kisses…I pondered the mystery, without being able to solve it.”

Not much of a mystery, really, as Hans had seduced the teenage Cosima to the strains of Wagner’s Tannhäuser. Since Hans became one of the most ardent advocates of Wagner’s music, a social relationship quickly developed, and Richard was able to spend plenty of time in Cosima’s company. In 1862, Richard and Hans shared conducting duties in Leipzig, and Richard reports, “I felt utterly transported by the sight of Cosima…she appeared to me as if stepping from another world.” One year later Wagner visited Berlin, and while Hans was rehearsing a concert, Richard took Cosima on a long carriage ride. “We gazed mutely into each other’s eyes. A fierce desire to acknowledge the truth seized us…with tears and sobs we sealed the pledge that we belonged to each other alone. It came as a relief to both of us.” Nine months later Cosima gave birth to Wagner’s daughter Isolde, and Hans seemed initially flattered that the great composer was sharing his wife. Richard hired Cosima as his secretary, and she gave birth to another daughter, christened Eva. Minna Wagner died of heart failure in 1866, Sigfried Wagner was born, and Cosima obtained a divorce from van Bülow in 1870. Cosima confides in her diary, “My love became for me a rebirth, a deliverance, a fading away of all that was trivial and bad in me, and I sealed it through death, through complete devotion.” (By the way, Bülow never again spoke to Wagner and began instead to champion the music of Johannes Brahms!) Richard and Cosima married in Lucerne on 25 August 1870, and immediately scouted for a location to build a theater, where Richard could exercise complete artistic control. They selected the small town of Bayreuth, and the first Festival was held in 1873. 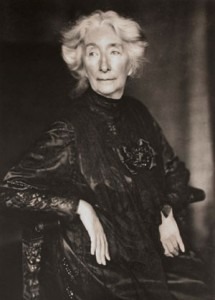 Cosima began to devote herself completely and exclusively to Richard’s causes, in a sense becoming his “spiritual nurse.” She decided which friends he should have, and “sought to protect him from the vulgarities of criticism, and the demands of other people.” She was not, however, successful in protecting Richard from the arms of Judith Mendès-Gautier, daughter of the poet Théophile Gautier. “Her nose continues the line of her brow, as in the days the gods walked the Earth, and her complexion was dark ivory…every feature could have been taken from a god-like Sphinx or a female warrior of Thyatira.” Richard’s correspondence certainly provides insight into his infatuation with Judith. “How I long to kiss you once more, dearest sweetheart…love me and let us not wait for the protestant kingdom of heaven…I embrace you, my beautiful love, my precious adored soul, my child, my Judith.” Initially, Cosima ignored the affair, as she was clearly aware that Richard was not really a chaste choirboy; after all, he had seduced her sister Blandine in Paris. But when talk turned towards eloping, Cosima resolutely stepped in and put a quick end to it. In 1883, it was rumored that Richard had a passionate affair with the soprano Carrie Pringle, which led to a furious row between Cosima and Richard in the morning of 13 February. At noon of that day, Richard suffered a fatal heart attack and died in Cosima’s arms; she continued to embrace his dead body for the next 24 hours. It has often been suggested that the marriage between Richard and Cosima was “a sublime union of the master and his muse, that comes around once every 5000 years.” However, there are reports that Richard “lashed out more and more often at Cosima with uncontrollable fits of rage, and that she cried a great deal.” Supposedly, he once jumped out of bed and shouted furiously at her “You think you are virtue incarnate!!!” For 47 years after his death, Cosima perpetuated Richard’s memory, and with the help of her son Siegfried and his English-born wife Winifred — who was a close personal friend of Adolf Hitler whose correspondence with the Führer has never been released by the Wagner family — turned the Bayreuth Festival into a centre for the cult of German purity. Eva Wagner-Pasquier and Katharina Wagner currently manage the Festival, and waiting time for tickets is estimated to be between 5 and 10 years.