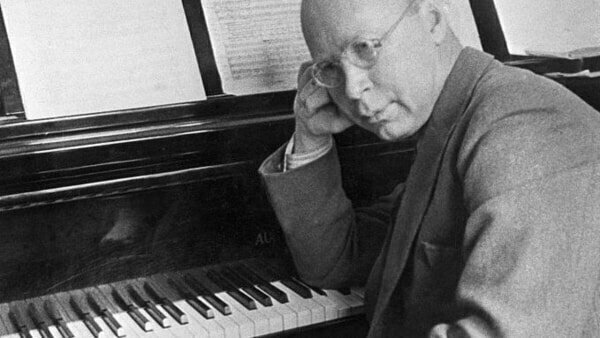 Having recently given a performance of Prokofiev’s Symphony No. 5, I was reminded how lyrical, intense, and downright wonderful this piece is. With that said, Prokofiev’s music can take some getting used to. I speak from personal experience: it took me a while to really get into Prokofiev’s symphonies, but there is some amazing music to be discovered within.

I’m here to make a case for this great piece, and to lift the lid on some of the things that make it so memorable. Plus, there are a good handful of clarinet tunes, which is never a bad thing, right?

Prokofiev conducted the premiere himself in 1945, in the Great Hall of the Moscow Conservatory with the USSR State Symphony Orchestra. He stated that the symphony was ‘a hymn to free and happy Man, to his mighty powers, his pure and noble spirit’, and we get this idea right from the opening of the symphony.

The piece begins simply, with a flute and bassoon setting out the main theme which quickly develops and turns into something grand and optimistic. This whole movement is full of contrast: simplicity versus grandeur, calmness against agitation, open space battling claustrophobia.

Prokofiev maintains this sense of contradiction throughout the symphony. It is precise and angular, but also intensely expressive. This is evident in the second movement, a Kafka-esque soundscape, conjuring images of characters turning down endless corridors, unable to escape.

There are, however, moments of respite from this manic world. The sunshine pokes through with a jolly fanfare-like motif in the woodwinds, making the surrounding material, by contrast, seem even darker, almost comic. The sound of low trumpets cackling away ratchets the scherzo up to a frantic finale.

Prokofiev: Symphony No. 5 – Opening of the Second Movement

The third movement is the dark, rich, gooey centre of the symphony. The opening of the movement is quintessential Prokofiev – something seems unsettled behind the apparent normality of what’s going on. The music is tonal, but something rocks and sways. Taking a closer peek shows an undulating, uneasy-yet-settled contradiction between F major and F minor. The bass line, instead of moving up a simple F-A-C arpeggio, raises its eyebrow with a B natural instead of an A.

This sets the tone for the rest of the movement, moments of intense lyricism bristling against foreboding moments of terror. The climax has the most painful, tortured screams from the strings and high winds, which are followed a few minutes later by some of the most tender and haunting music of the symphony: a beautiful key change underneath a plaintive piccolo melody. It’s easy to hear so many emotions and experiences in this movement, made arguably even more poignant knowing that this symphony stood against the backdrop of the still-ongoing Second World War.

After a brief interlude, featuring the warm sound of divisi cellos, the final movement begins. Memories of the second movement are stirred here, the music offering moments of respite that are interrupted by a frantic thumbing of the nose.

The climax of the movement, while awe-inspiring and menacing, also retains a touch of humour. Images are conjured up in my mind of an old machine that is out of control. You can hear the sparks flying off the sides and the motor continuing relentlessly, the orchestra threatening to collapse under its own weight. Over this driving rhythm soar the brass, trumpet melodies and trombone glissandos contributing to this bizarre atmosphere somewhere between fear and laughter.

The ending of the symphony catches us by surprise (does that count as a #spoileralert?) – at the very top of the climax, instead of crashing to a finish, most of the orchestra melts away and leaves us with an unhinged string sextet going full pelt, wrong notes and all. We sit in this sound world for just a moment; before we have time to realise what’s really going on, the trumpets interrupt and bring the symphony to a close.

Prokofiev’s Symphony No. 5 was incredibly well-received at both the USSR premiere in 1945 and, later that year, the USA premiere, given by Serge Koussevitsky and Boston Symphony Orchestra. It is a firm favourite to this day, and it’s not hard to see why. If Prokofiev’s music seems a little impenetrable and angular, then, well… that’s kind of the point. But looking beyond the surface gives you a glimpse of some incredibly beautiful musical moments.

It is an ode to the spirit of humanity, and the sense of optimism it inspires will hopefully live on for many years to come. And I didn’t even get onto the clarinet tunes… This piece is so fantastic that the clarinet moments aren’t even the best bits. How’s that for a ringing endorsement?