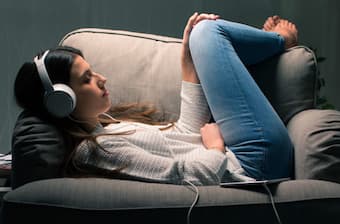 A few weeks ago, a good friend of mine invited me to play some lullabies for her baby shower. She collected lullabies from different parts of the world and transcribed them for guitar, piano, and violin. I am very much inspired by her collections of lullabies and want to find out more to share with our readers here. A lullaby or cradle song is described as a delicate piece of vocal music that lulls the baby or child to sleep. There are lullabies from all over the world. Similar to folk music, traditional lullabies are written according to the cultures and languages they are from.

I want to start with this article by sharing the Cantonese lullaby I grew up with. It is called 月光光 (Bright Moon). It is originally a children’s folk song that appeared in the Ming dynasty. Due to its popularity, it has been arranged into different styles and formats, including a choral setting sung by the Vienna Boys Choir.

In the classical music world, many composers were inspired by lullabies. Perhaps one of the most famous pieces is the lullaby by Johannes Brahms (1833-1897) Wiegenlied, Op.49, No.4. It was initially written for voice and piano in 1868. Brahms dedicated this piece to his friend Bertha Faber to celebrate the birth of her second son. Brahms later used the lullaby tune as the second theme of the first movement of his Second Symphony (1877).

The following piece is written by Evelyn Chang, a Taiwan-born composer who is currently based in Hong Kong. Her work, Partita’s Lullaby for piano, was written to celebrate her friend’s newborn grandchild, Partita, who was born in December 2021.

Rebecca Clarke: Lullaby for Viola & Piano and Lullaby on an Ancient Irish Tune

Known as a viola virtuoso, British-American composer Rebecca Clarke (1886-1979) composed many pieces for viola that became standard viola repertoire, including her Sonata. She also composed two lullabies for viola. Lullaby for Viola & Piano was written in 1909, and the Lullaby on an Ancient Irish Tune was composed in 1913.

Grazyna Bacewicz’s Lullaby is the fourth piece of her Suita dziecięca (Children’s Suite) for piano. Grazyna Bacewicz (1909-1969) was a Polish composer and violist who was the second Polish female composer to be internationally recognized (the first being Maria Szymanowska). Suita dziecięca was composed in 1933 during her study with Nadia Boulanger.

The following two pieces come from the Spanish-speaking world. The first one, Drume Negrita, is a famous Cuban lullaby originally written by Ernesto Grenet Sánchez (1893-1950) and was first recorded and released by Miguelito Valdés in 1942. World-famous composer, conductor, and guitarist Leo Brouwer (1939-) rearranged Drume Negrita for solo guitar work, which has become a staple of guitar repertoire.

The second piece, Assim Ninava Mamãe (Lullaby), belongs to the second piece of Petizada (Troupe of Naughty Boys) written by legendary Brazilian composer Heitor Villa-Lobos (1887-1959). This short miniature, along with five other short pieces in the book, was composed in 1912 for solo piano. As one of Villa-Lobos earliest compositions, Petizada showcases some nineteen-century-European musical elements as well as the indigenous and popular cultures in Brazil.

“Sleep” is associated with death, and a lullaby can be related to music mourning someone’s death, such as Maria’s Lullaby in the opera, Mazeppa. Written in 1883 by Pyotr Ilyich Tchaikovsky (1840-1893), Mazeppa is set in Russia in the early 1770s, and it was inspired by a poem by Alexander Pushkin. In the opera, Mazeppa was a Cossack chief. He was much older than his lover, Maria, who was loved by Andrey. Maria was deeply in love with Mazeppa and wanted to marry him, but Maria’s father refused their marriage. Mazeppa later ordered the execution of Maria’s father. He also shot Andrey. Maria sings this lullaby to Andrey as he dies in her arms. What a tragedy!

Berceuse is a composition genre that is considered to resemble a lullaby. It is a familiar genre used by many composers in the 19th and early 20th centuries, including Frédéric Chopin (1810-1849). His Berceuse in D-flat major, Op.57, was written in 1943-44 as variations on a theme.

Italian composer Ferruccio Busoni (1866-1924) turned a lullaby into a sad piece of music. Berceuse élégiaque was initially written in 1909 for solo piano as the seventh piece in his collection Elegies. The same year he adapted the work for orchestra. I personally enjoy the solo piano version.

Whether a lullaby is used to lull someone to sleep or mourn someone’s death, the hallmark of a lullaby is its soothing and charming melody, including this last piece I will share in this article. Lullaby for String Orchestra was written in 1919 by George Gershwin (1898-1937). Originally written for solo piano, this single-movement work was later scored for string quartet. Gershwin adapted the melody of this piece in his opera Blue Monday.