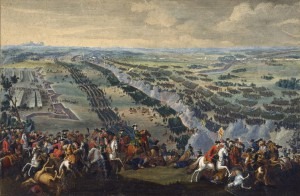 “It is forbidden to kill; therefore all murderers are punished unless they kill in large numbers and to the sound of trumpets.” Voltaire was certainly right on the money about warfare and humanity. And he was also right about the long and close association of music with warfare. Whether in imitation, celebration or actual battle, music has long played an important role in state-sanctioned aggression and violence. Given that some parts of the globe have been in almost perpetual turmoil—with current troubles in the Ukraine a sad but apropos example—it’s hardly surprising that poets and composers have risen to all kinds of nationalist causes. In 1828, Aleksandr Pushkin penned his narrative poem Poltava, about the Ukrainian Cossack Ivan Mazeppa’s support of Sweden in his quest for Ukrainian independence from Poland and Russia. Although Pushkin did take some artistic licenses, there was indeed a battle fought in the hilly terrain near the Ukrainian town of Poltava over 300 years ago. In the history of warfare it does not rank as an outstanding example of bravery, generalship or brilliant tactics. However, Peter the Great’s victory over Charles XII on 27 June 1700 signaled the end of Sweden’s long period of domination of the Baltic, and the emergence of Russia as a major European power.

Victor Hugo and Lord Byron initially versified the legend of Mazeppa in the early 19th century. It tells the morbid tale of the Ukrainian page caught seducing a noble Polish lady. As punishment for his indiscretion, Mazeppa is tied naked to a wild horse and chased into the Ukrainian steppes. The horse eventually dies of exhaustion and Mazeppa, close to death, has visions of Ukrainian independence. Eventually he is found and released by the Cossacks and becomes their leader. Franz Liszt certainly liked the story enough to use it as the program for his Transcendental Étude No. 4 in D minor. A highly virtuosic staple of the Romantic piano repertoire, the galloping work is aptly subtitled “Mazeppa.” Liszt returned to the same subject for his sixth symphonic poem, composed during his tenure in Weimar in the beginning of the 1850s. 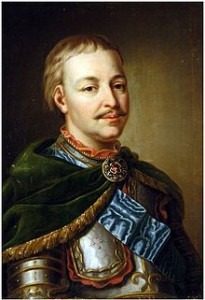 Pyotr Ilich Tchaikovsky first mentioned the idea of an opera based on the Mazeppa legend to his publisher in the summer of 1881, and Viktor Petrovich Burenin adapted Pushkin’s Poltava for the operatic stage. This tale of crazy love, abduction, political persecution, execution and vengeful murder begins after Mazeppa’s equestrian adventure. Marija, daughter of the wealthy Cossack Kochubey declares her love for the aging Mazeppa, who is also her godfather. In turn, her childhood friend Andrei passionately loves her. When Mazeppa asks Kochubey for his daughter’s hand, he is ridiculed and calls for his personal guards. Marija barely manages to separate the feuding faction, and when Mazeppa calls on her to make a decision, to everybody’s surprise and distress, she opts to elope with Mazeppa. Kochubey hatches a scheme to reveal Mazeppa’s anti-tsarist intrigues to the Tsar; however, Peter the Great eventually sides with Mazeppa and Kochubey is thrown in jail and awaits execution. Marija rushes to the prison in order to save her father, but arrives moments after his beheading. During the Battle of Poltava, when Peter the Great defeats Mazeppa and Charles XII of Sweden, an enraged Andrei ambushes Mazeppa. Andrei is mortally wounded and dies in the arms of Marija, while Mazeppa flees from the approaching Russian troops.

The third act of the Tchaikovsky’s Mazeppa is introduced by music representing the battle of Poltava. In this graphic and patriotic depiction of Russian triumph over Ukrainian separatists, Tchaikovsky incorporates the traditional song “Slava” known from the Coronation Scene in Boris Godunov, as well as the Russian hymn “God Preserve Thy People.” In present-day Ukraine, Mazeppa is still regarded as an honored and heroic fighter for Ukrainian statehood, and his image even graces the local currency. On 27 June 2014, Ukrainian patriots rallied in Poltava and unfurled a gigantic Ukrainian flag in his honor. For Russia, as you might well imagine, Mazeppa is still Public Enemy No. 1. Having betrayed Peter the Great, Orthodox Christianity and the unity of the Slavic people, Mazeppa is classified as a bona-fide traitor. The Russian Orthodox Church excommunicated him, and in recent ceremonies of the Poltava battle, Russian demonstrators have burned him in effigy. In a perfect example of history repeating itself, the three-hundred-year old Mazeppa once again takes center stage in all manners of nationalist lunacies. With civilian airliners becoming legitimized targets for rightist extremism, one has to wonder how far humanity has really progressed in the last three centuries?

Pyotr Il’yich Tchaikovsky: “The Battle of Poltava” from Mazeppa