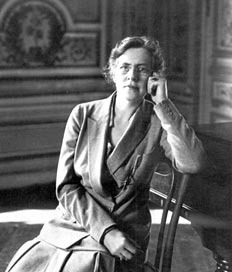 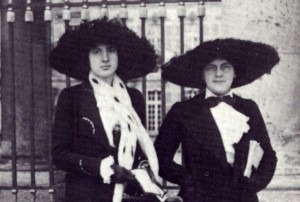 But her beginnings did not bode well. “I couldn’t bear the least note of music. I was almost ill, I yelled. People could hear my sobs in the street”—a challenge for the musical household. Her father Ernest Boulanger, was a respected composer and professor at the Paris Conservatory, her Russian mother, Raissa Myschetsky, was a remarkable singer. Nadia’s attitude towards music took an about-face when she was five years old. She heard an emergency vehicle pass by their Paris apartment. Surprising everyone, she picked out the note of the siren on the piano. She payed more attention to the music around her and by the time she was twelve she had memorized Bach’s entire Well-Tempered Clavier.

Boulanger became a student at the Paris Conservatory in 1897, where she studied composition with the renowned composer Gabriel Fauré, completing her conservatory studies in 1904. Four years later, her cantata “La Sirène” took second place in the Grande Prix de Rome competition.

3 Pieces for cello and piano 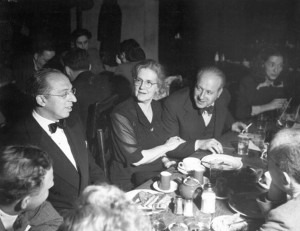 Nadia’s younger sister, Lili, manifest extraordinary talent in composition as well. Outdoing her older sister, she was the first woman to receive the Grande Prix de Rome. Their father had passed away in 1900 leaving the family destitute. Nadia became her sister’s mentor at the tender age of twelve. In order to help support the family, thinking that her own compositions were useless, “useless!” (I would disagree hearing her Three Pieces for Cello and Piano and Fantasy for Piano and Orchestra!) Nadia focused on her life’s calling—that of being a musical visionary, teacher and pedagogue. Her strong will served her well in later life. 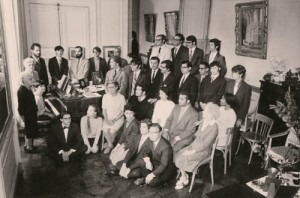 Boulanger sought students who had not only talent and technique but also unwavering character. Aware of the sacrifices necessary to become an excellent musician, she would ask, ”Can you live without music?” Without that compulsion, pursuing music would be like marrying somebody you don’t love. Boulanger believed that students who had to be pushed would never accomplish anything.

Boulanger’s Rue Ballu Paris apartment was her teaching studio, crammed full of furniture, pianos, photos, and memorabilia, much of it from her grandmother’s era. Although she dressed conservatively in black or grey, seemingly suspended in time, she was open-minded, ready to accept new ideas and concepts. Her home became a Mecca for students and musical luminaries. Weekly Wednesday afternoon Soirées offered her students the opportunity to mingle—Stravinsky, Paul Valéry, Igor Markevich, Eliot Carter, Walter Piston and others. They studied a Bach Cantata each week intensely focusing on the music itself, to discover how a composition communicates something unforgettable. 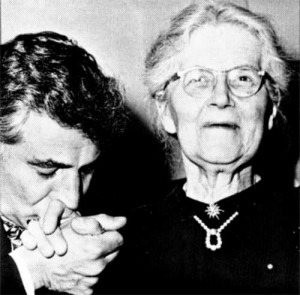 She sat very close to her students at the piano ready to play, conduct and sing along, and if necessary, grab the student’s arm in mid-phrase stopping them abruptly to make a point. Intense focus was always on the music itself, her philosophies transformative—“I have always preferred the word ‘transmit’ to ‘interpret’. It seems to take better account of the attitude necessary to those whose job it is to shed light on a work…A sublime interpretation is essentially one which makes me forget the composer, forget the interpreter, forget myself, forget everything except the masterpiece…I think the highest praise is to say that the supreme interpreter becomes invisible.”

Ruthless discipline, absolute attentiveness, artistic rigor and above all order were expected of each student—without which the quality of the ideas could not shine. “One can never train a child carefully enough. If you take general education, one learns to recognize color, to recognize words, but not to recognize sound… most people hear nothing because their ears have never been trained and many musicians hear very badly and very little.”

The uncanny discernment of her ears and prodigious memory of the repertoire astonished her disciples. When Leonard Bernstein first met Boulanger he was already fifty-eight years old. She made him feel like a 21-year-old beginner!

Boulanger nurtured her students’ unique voices and encouraged individuality. When a frustrated Astor Piazzolla decided to become a “classical” composer and came to work with her, Boulanger urged Piazzolla to play some of his own music. “I play tango,” he admitted. Afterward Boulanger responded, “This is Piazzolla.”

Although Nadia focused most on her teaching, as a conductor she led many world premieres including of the works of Stravinsky, and Copland and featured the music of Monteverdi, Fauré and her sister who, plagued with ill health, passed away at the tender age of twenty-four.

Boulanger toured the U.S. in 1924 performing solo organ works including the premiere of Aaron Copland’s Symphony for Organ and Orchestra, which was dedicated to her, but it was not until 1935, the year Boulanger’s mother passed away, that she was free to travel to engagements becoming the first woman to conduct both the London Symphony and Royal Philharmonic Society Orchestra. Subsequently, in 1938, she embarked on a longer tour to the United States making her debut with the Boston Symphony, the first woman to do so, and to present over 100 lectures at prestigious colleges including Harvard, Radcliffe, Wellesley and the Longy School of Music in Cambridge MA.

Once World War II was imminent she returned to Cambridge. There she gave lessons in composition until the war ended making a huge impact on American composers. Boulanger was also associated with The American Conservatory of The Fontainebleau School. She taught there every summer from 1921 until 1979.

Nadia Boulanger won the admiration of a century of outstanding musicians, receiving countless awards. Today her influence and complete dedication to the transcendent meaning of music is still felt.