French composer Charles Koechlin (1867-1950) started life as an engineering student but poor health and poor grades made him give this up at age 22, he entered the Paris Conservatoire. He studied composition with Jules Massenet with his fellow students George Enescu, Ernest Le Grand, Reynaldo Hahn, Max d’Ollone, Henri Rabaud and Florent Schmitt. From 1896 he studied with Gabriel Fauré, working alongside Maurice Ravel and Jean Roger-Ducasse. 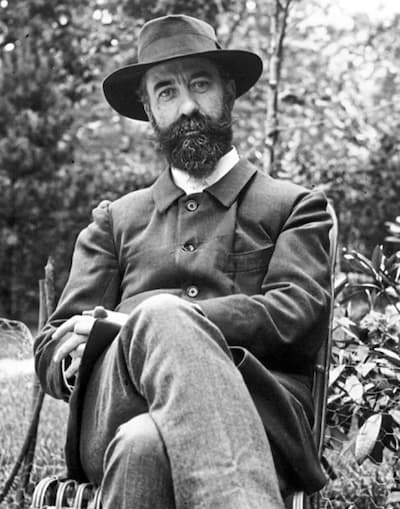 He was active in music not only as a composer but also as a critic. He was a founder, along with Ravel, of the Société musicale indépendante, and was a member of the International Society for Contemporary Music, serving at one time as President of the French section. His interest in contemporary music and young composers did not lead to a teaching position at the Conservatoire, and, in fact his application to teach counterpoint and fugue at the Conservatoire was defeated by a vote of 20 to 2.

Koechlin was a very prolific composer, but without institutional support, many of his performances had to be self-funded. This was made more difficult by much of his private fortune having gone after WWI. He wrote 5 symphonies, at a time when few French composers were working in the genre, and his Seven Stars’ Symphony, written in 1933, highlights another of his interests. It’s not about the celestial bodies but about the stars that live on our firmament: movie stars!

His first movement takes the original all-action hero for its subject: Douglas Fairbanks, and in particular, his role in The Thief of Bagdad. Fairbanks plays the common thief Ahmed who falls in love with the unattainable princess, daughter of the Caliph of Baghdad. With the help of his magic rope, a cloak of invisibility and some magic powder, he wins in the end. The critical scene where Ahmed sees The Princess for the first time takes place in her rose garden and it is this, rather than Fairbank’s athleticism that seems to be the core of this movement. 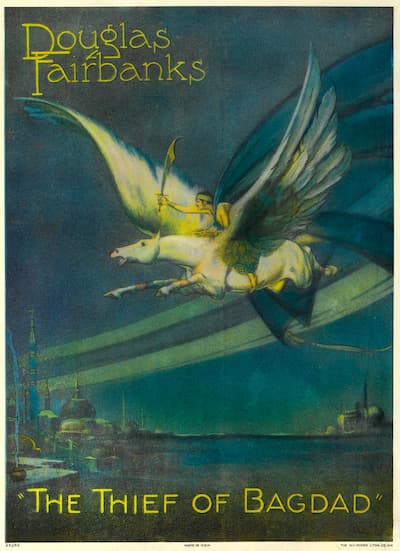 The Thief of Bagdad film poster, 1922


Koechlin was an infatuated follower of the English-born German film star Lilian Harvey (1906-1968). He dedicated works to her and wrote many ‘imaginary’ film scores for her, eventually writing over 100 pieces for her. The second movement Menuet fugue is in her honour. 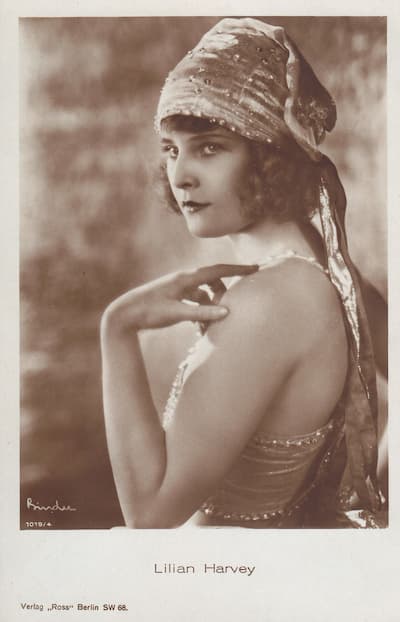 
Greta Garbo (1905-1990) was one of the great stars of Swedish then American film. From her first silent film in 1924 to her final film in 1941 before her retirement, she always sought solitude, with her line from Grand Hotel (1932), ‘…I just want to be alone’, symbolizing that desire. Koechlin, with the aid of the ondes martenot, captures the star’s aloof and austere essence. 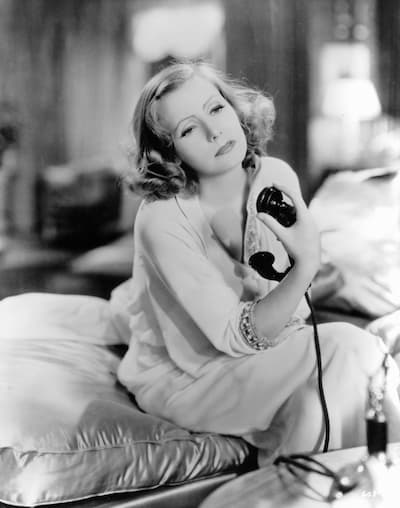 Greta Garbo as the Russian ballerina Grusinskaya in Grand Hotel, 1932

Invented in 1928, the ondes martenot was one of the earliest electronic musical instruments, played with either a keyboard (as shown here) or a ring on a wire. The inventor, Maurice Martinot, wanted to create an instrument that sounded like a cello. French composers such as Koechlin and Messiaen were advocates of the instrument with some of Messiaen’s pieces requiring up to 6 instruments, other composers who wrote for the instrument included Arthur Honegger, Darius Milhaud, Edgard Varèse, Marcel Landowski, Florent Schmitt, Matyas Seiber, and Jacques Ibert. It’s sound and technique were not unlike that of the theremin (patented in 1928), but the use of the keyboard made it easier to play. 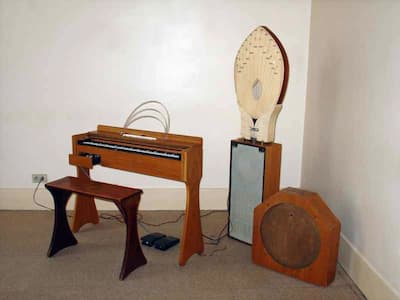 
The star of the 1920s silent films and a rare actor who made the transition to sound film, Clara Bos (1905-1965) was known as ‘The “It” Girl’ for her sex appeal, taking her nickname from her starting role in the 1927 film It. ‘It’ refers to ‘That quality possessed by some which draws all others with its magnetic force. With ‘It’ you win all men if you are a woman and all women if you are a man’, according to the author Elinor Glyn, who wrote the book and the film adaptation. 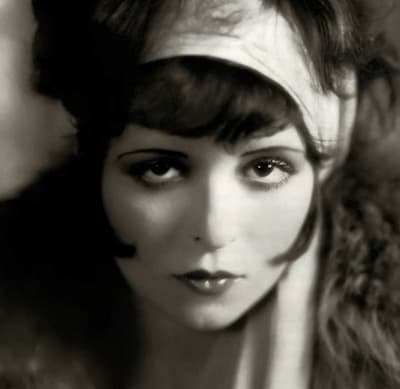 To show her in music, Koechlin gives us the scherzo movement of the symphony, full of the liveliness that Bow brought to her movies.


The next two movements bring us to two stars of early German cinema: Marlene Dietrich and Emil Jannings, who starred in Der blaue Engel (The Blue Angel) in 1930. In the film, the cabaret star Lola Lola, starts high school teacher Professor Rath on his downhill slide into being a cabaret clown before he goes mad because of his jealous infatuation with her. This slow movement pair is full of her suave assurance and his jealousy and thwarted desires. The film was the making of Marlene Dietrich’s career but did not give Jannings’ career the same career boost. His later work with the National Socialist government in Germany and their propaganda films was the end to his career. 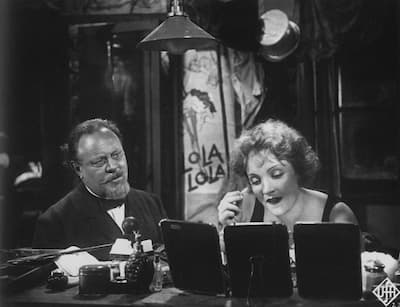 
Koechlin closes with an actor who is considered a worldwide icon, Charlie Chaplin (1889-1977). Best known for his character, The Tramp, Chaplin created films that were as funny as they were deeply moving. By 1933, the year Koechlin wrote his symphony, Chaplin had starred in and produced two of his most famous films: The Gold Rush (1925) and City Lights (1931), his last truly silent films. 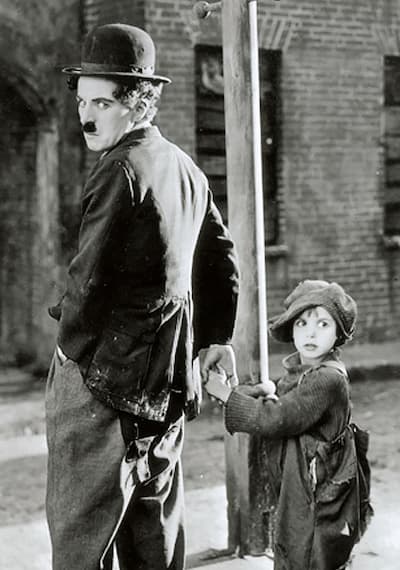 Charlie Chaplin with Jackie Coogan in The Kid, 1921

Both the wistfulness of Chaplin’s character and the chaos he could cause are captured in this highly variable movement.


Koechlin wrote his symphony focusing on the stars he loved. In cinema history, he was writing at a point in time where one major film industry (silent movies) had just died and talking pictures were just starting. Fairbanks never had the popularity in sound film that he had enjoyed in silents. Lilian Harvey had a 5-year career in silent and over a decade in sound film, with her career largely in France. She made 5 American and 1 British English-language films in between 1933 and 1935. Greta Garbo and Marlene Dietrich were actresses who moved from their native countries to Hollywood and had great success. Clara Bow’s Brooklyn accent wasn’t a deterrent in her move to talking pictures. Her universal appeal as the flapper girl defined a generation and became the first sex symbol in film. Emil Jannings’s definitive role as the downward-sliding bourgeois professor drew upon his experience in theatre. In 1928, two years before The Blue Angel, he was awarded the first Academy Award for Best Actor, beating out Charlie Chaplin. Chaplin is a category unto himself and it’s fitting that he’s the final star in Koechlin’s panoply of actors.