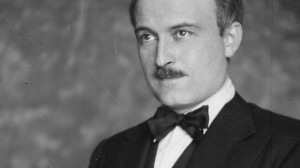 Jacques Ibert (1890-1962) who was born 125 years ago gleefully reminds us that high-quality classical music does not always have to be deadly serious. He managed to sum up his general approach and attitude towards music in a few meaningful words: “I want to be free—independent of the prejudices which arbitrarily divide the defenders of a certain tradition, and the partisans of a certain avant garde.” This quest for musical freedom meant the rejection of the two artistic trends that dominated the French musical scene at the turn of the 20th-Century, French Impressionism and German Expressionism. Instead, in his own musical compositions, Ibert revived the balance and clearly perceptible processes of earlier musical styles, recasting them in contemporary and highly personal terms. In fact, Ibert only agreed to write music that he was happy to listen to himself.

Jacques Ibert: Divertissement
Composed in 1929/30, Divertissement is incidental music for the theatrical play The Italian Straw Hat. A farcical comedy, it features the adventures of a nervous bridegroom on his wedding day. The poor man has inadvertently ruined his hat and attempts to conceal that fact from his intended bride, her suspicious father and the entire wedding party. A highly eclectic mix of styles that include music hall tunes, blues and jazz, Viennese waltzes and the “Wedding March” from Mendelssohn’s A Midsummer Night’s Dream musically supports the ensuing confusion. The Capriccio for flute, oboe, clarinet, bassoon, trumpet, string quartet and harp confirms Ibert’s stylistic diversity and eclecticism. Unfolding in one continuous movement, the work features colouristic improvisations and sparkles with characteristic humour, as show tunes irreverently mingle with learned counterpoint.

Jacques Ibert: Capriccio
In 1910, Ibert became a student at the Paris Conservatoire and counted Arthur Honegger and Darius Milhaud among his classmates. World War I interrupted his musical studies, and the young composer served as a naval officer. With the encouragement of Nadia Boulanger, Ibert resumed his musical studies and won the Prix de Rome, the highest prize awarded by the Conservatoire, with his cantata Le poète et la fée (The Poet and the Fairy). The set of ten character pieces entitled Histoires (Stories) originate in 1922. Charming musical miniatures, Ibert quickly develops musical pictures in snapshot form. And with movement titles like “The leader of the golden tortoises,” “The little white donkey,” and “The crystal cage,” we can be assured that the composer is not taking himself all too seriously!

Jacques Ibert: Histoires
Claude Debussy was utterly indignant about receiving a commission from Mrs. Richard J. Hall to write a work for saxophone. He reluctantly set to work, but it still took him over ten years to come up with something worthwhile. Jacques Ibert meanwhile, loved the saxophone. He employed the instrument in his music for the theater and the concert hall. His Concertina da Camera dates from 1935 and is scored for alto saxophone and 11 instruments. The composer takes advantage of a number of contemporary musical trends, including the prevailing jazz and blues influences of his day. Ibert composed the work for Sigurd Raschèr, an American saxophonist who became instrumental in developing the repertoire for the classical saxophone. In all, 218 works for saxophone are dedicated to him, including the Concerto by Alexander Glazunov and the Concert Piece by Paul Hindemith.