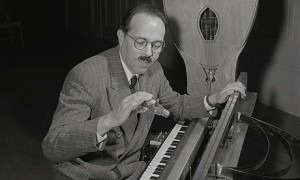 The history of early electronic musical instruments is filled with evocative and colorful names. We find the Telharmonium (1897), Theremin (1919), Spharophon (1924), Electronde (1933), Trautonium (1930), Mellertion (1933), and the Ondes Martenot (1928). All these early synthesizers make use of vacuum tubes for the generation and amplification of electrical signals. However, it was the particularly eerie and wavering sounds of the Ondes Martenot that proved irresistible to a substantial number of composers. Some scholars estimate that around 1,000 works have been composed for the instrument, although that figure appears to be somewhat optimistic. More realistically, we are probably looking at 15 dedicate concertos and roughly 300 chamber music works, with plenty of uses in popular and film music thrown in for good measure. And just in case you are thinking that the Ondes Martenot was purely a niche instrument, consider that Olivier Messiaen, Edgard Varèse, Darius Milhaud, Pierre Boulez and Arthur Honegger wrote dedicated compositions. And if you are so inclined, several conservatories in France still offer dedicated instruction of the instrument. 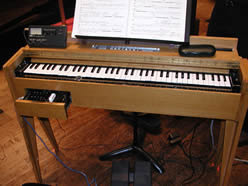 Maurice Martenot was a capable cellist and a radio operator in WW1. Mesmerized by the overlaps of tones from military radio oscillators, he imagined an electronic instrument that would be capable of producing a degree of musical expressivity associated with the cello. Immediately after the war he went to work and eventually patented the Ondes Martenot in 1928, the same year the Russian inventor, Léon Theremin registered his electronic musical device. Originally, the main interface of the Ondes Martenot was a metal ring, worn on the player’s right index finger. Sliding the ring up and down the wire created sweeping and eerie glissandi. Martenot improved that system by adding a four-octave keyboard. Just pressing down the keys produces no sound, as that function is controlled by a small drawer of controls located on the left side of the instrument. This control mechanism is made of glass and can be depressed to various levels of depth in order to control the musical dynamics. A light touch will produce a delicate pianissimo, while depressing the controls all the way elicits a thundering fortissimo.

Equally important is the manner in which the controls are pressed as it determines the attack of the note. Quick taps in succession produce staccato articulation, while a more deliberate depression is used to play legato passages. The small control drawer also contains a number of switches that influences the instrument’s timbre. Similar to organ stops, each switch has its own sound color, which can be used independently or in combination. And finally, Martenot made the keyboard touch sensitive. All the keys were laterally moveable and could produce a vibrato when wiggled. The amplification system, consisting of three altered loudspeakers that added a range of special effects, was the final genius of Martenot’s invention. Producing a range of effects from a metallic timbre to the resonant and chiming sound of a string chorus, the instrument sounded both mythical and futuristic.

The International Exhibition of Arts and Technology opened in Paris on 4 May 1937. To provide background music for a festival of sound, water, and light, the city of Paris commissioned 20 works from 20 different composers, including Olivier Messiaen. “I opted for a sextet of Ondes Martenot,” writes the composer, “it seemed a marvelously apt choice for this spectacular audio-visual performances in which fireworks in the sky were mirrored by jets of water combined with the harmonies of symphonic music.” More recently, excerpts from this exceptional Messiaen score featured on the soundtrack of The Revenant, starring Leonardo DiCaprio, which won a Golden Glove for best dramatic film. Messiaen went on to use the instrument in a number of other contexts, as did André Jolivet in his superb concerto for Ondes Martenot and orchestra.